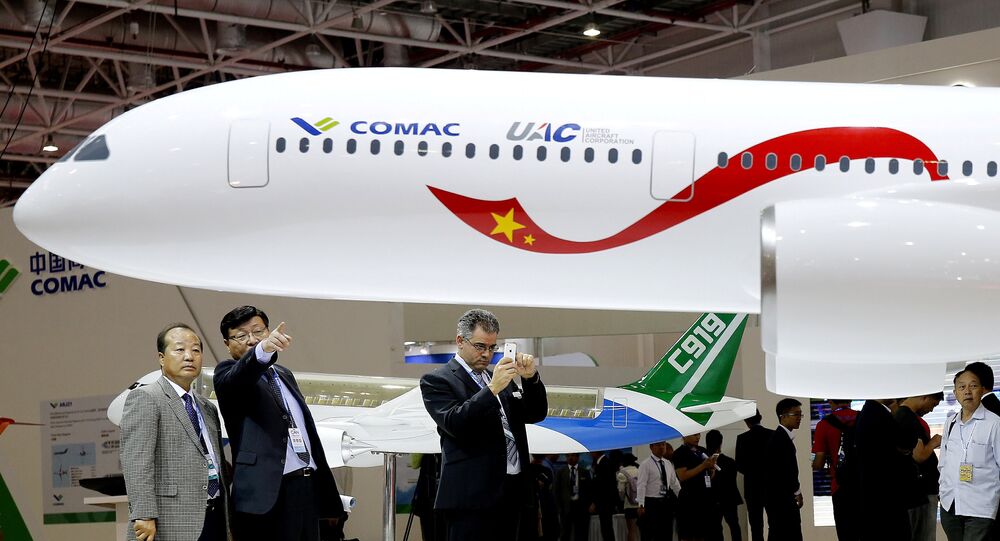 ZHUHAI(China)(Sputnik) - Russia's United Aircraft Corporation (UAC) and the Commercial Aircraft Corporation of China (COMAC) presented for the first time a full-scale prototype of CR929 wide-body long-range aircraft at the Zhuhai Airshow, a Sputnik correspondent reported from the scene.

"Today's event is an opening of the full-scale mockup of our joint aircraft and the opportunity to personally visit the cockpit, look at the organization of space in the first class, business class, economy class. It shows that we have something to get [potential buyers] interested," UAC President Yury Slyusar told journalists.

Sino-Russian joint venture #CRAIC has unveiled a full-size mock-up of the wide-body #CR929 at #ZhuhaiAirShow this morning.@avgeekretweeter pic.twitter.com/Mllws0mF9J

The full-scale mockup includes the cockpit and three classes of passenger compartment layout. The length of the layout is 22 meters (72 feet), it is 6.5 meters high and 5.9 meters wide. The salon is equipped with two rows of first-class seats, three rows of business-class seats and four rows of economy-class seats, including an entertainment system and interior design in Chinese and Russian styles.

So this is what a Chinese-Russian widebody looks like. Meet the forward fuselage mock-up for the CRAIC CR929. #ZhuhaiAirShow pic.twitter.com/hz2FZFS6cu

© AFP 2019 / FRED DUFOUR
Russia, China Consider Bilateral Trade in National Currencies to Cut Dollar Use
The CR929 program is currently at the stage of preliminary design and selection of suppliers of basic systems and equipment, which will be completed before 2020, the chief designer of CR929 program from the Russian side Maxim Litvinov recalled.

He also noted that, according to the agreement with COMAC, the engineering center for the development of wide-body long-haul aircraft will be located in Russia.

Russia and China intend to implement plans to build the CR929 aircraft by 2025-2027. The cost of the program is currently estimated at $13-$20 billion. The maiden flight of the aircraft is expected in 2025.