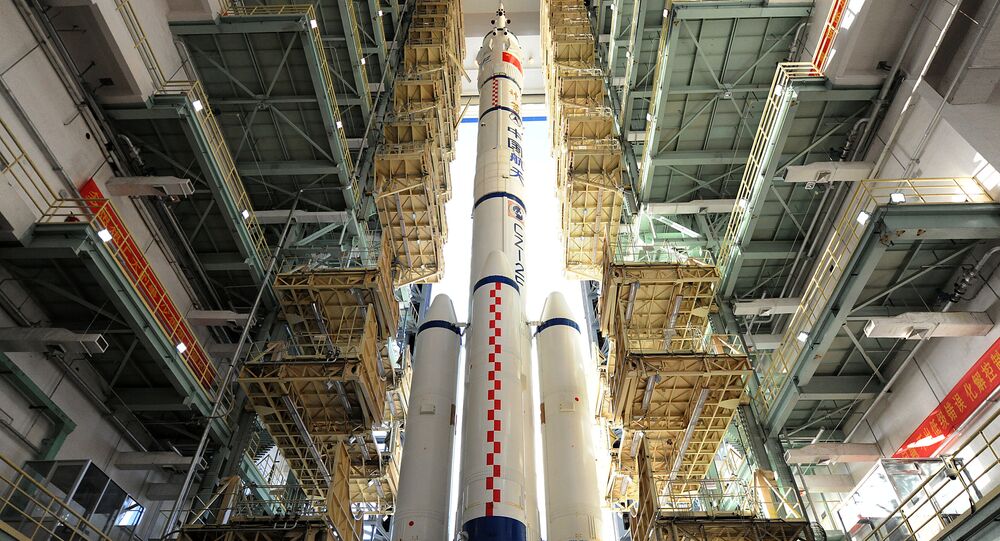 In the first initiative of its kind, Chinese and French scientists have launched a satellite aimed at monitoring interactions between the Earth's atmosphere and oceanic activity to tackle climate change.

The rocket will orbit 519 kilometers above the earth to observe atmospheric and oceanic changes for researchers in both countries.

The satellite uses the French-engineered Surface Waves Investigation and Monitoring (SWIM) system used to detect the direction and wavelength of tidal patterns along with Chinese SCAT (wind SCATterometer) technologies to measure wind currents, in addition to researching polar ice caps and glaciers.

Scientists will also use the satellite to forecast strong storms and save lives by evacuating coastal areas earlier, China's Ocean Satellite Center director Liu Jianqiang said as quoted by CGTN.

© AFP 2020 / Jiuquan
Unlike US, China Seeks to Cooperate With Other Nations in Space Exploration
"This is the first time in the world that a satellite will monitor ocean surface winds and waves at the same time," Wang Lili, CFOSAT project chief said. "It's also the first time both French and Chinese radar instruments will be applied together in one project."

Patrick Castillan, FNSRC chief said: "For the ground system, we provide two earth stations, located at the earth pole that could be able to make some real-time collection of the data. And we also provide the mission center, [who is] able to process the data."

Chinese president Xi Jinping and French president Emmanuel Macron congratulated one another on Monday, with President Xi stating in a message to Macron that space cooperation in an important party in both countries' strategic partnership and adding that China is willing to continue working with France to promote bilateral cooperation across all sectors to benefit both countries.

President Macron reciprocated Xi's message, stating that the CFOSat launch marks an important step in space cooperation between France and China and embodied the hard work of both space agencies. "And it also reflects the will of France and China to promote the international community's joint response to the challenges of climate change."

CNES and CNSA signed the first cooperation agreement in 1997 between the two countries to peacefully study outer space, CNES president Jean-Yves Le Gall said in a press statement from the Jiuquan launch base, adding that the CFOSat mission commenced in 2014 and "combined their efforts in this area ever since".

"We signed a memorandum of understanding in January this year, in the presence of Presidents Emmanuel Macron and Xi Jinping, to step up this cooperation and encourage wide uptake of CFOSat data," he continued. "These data will be instrumental in the success of the Space Climate Observatory (SCO), one of the flagship measures in the Paris Declaration adopted by the world's space agencies at the One Planet Summit in December 2017."