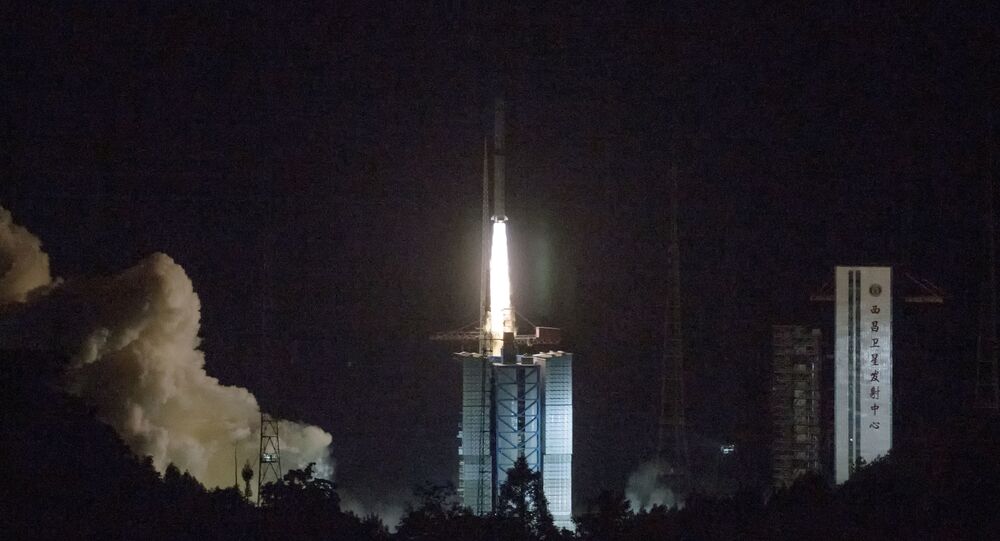 China’s lunar program is setting ambitious goals, including exploring both lunar poles by 2030 and, further in the future, sending manned missions to the moon and establishing a permanent base there. The news comes as leaders of the US and Chinese space agencies said they were open to cooperation on research and missions.

Li said the first mission in this program will blast off before the end of the year, when the Chang'e-4 probe is sent on its way to the far side of the moon. If successful, Chang'e-4 will be the world's first soft-landing, roving probe on the moon's far side.

The moon orbits the Earth in a tidally locked orbit: the same side always faces our planet, meaning we never get to see the far side, which takes the brunt of impacts by interstellar objects that might hit us.

Named after Chang'e, the goddess of the moon in ancient Chinese mythology, China's lunar exploration program was launched in 2003, and it has sent five robotic rovers to the moon since 2007.

CNSA laid the groundwork (or spacework?) for the Chang'e-4 mission this past May when it launched the Quequiao satellite to the the Earth-moon system's L-2 Lagrangian point, a uniquely gravitationally stable location on the far side of the moon. The satellite will serve as a communications relay supporting future Chinese moon missions, Sputnik reported.

Chang'e-4, originally a backup unit for a previous mission, was actually never supposed to go into space, but the failure of Chang'e-5's rocket engine in 2017 caused it to be selected instead, Scientific American noted. Chang'e-5 will eventually get its day, perhaps in 2019, when it'll be able to return lunar samples back to Earth.

Three subsequent missions will do the same for the two lunar polar regions, exploring them and returning samples to Earth, Li noted. After that, CNSA plans on sending taikonauts (those are Chinese astronauts, folks) to the moon and eventually setting up a scientific research station there.

The last time humans were on the moon was December 14, 1972, when the US Apollo 17 mission departed from a three-day stay on the surface of Earth's only natural satellite.

​By 2030, CNSA's ultra-powerful Long March-9 rocket is expected to be in service, lifting 140 tons of cargo into low-Earth orbit — more than any other rocket in use or even in development by any nation or company. Xinhua News Agency reported earlier this year on the rocket's development, which Long Lehao, a senior official at the Chinese Academy of Engineering, indicated will be necessary to support manned lunar landings, deep space exploration and construction of a space-based solar power plant.

In April, China sought public submissions for innovative ideas for the country's manned lunar program, Sputnik reported. They sought novel ideas for the design of the lunar surface landing as well as ascent vehicles.

Meanwhile, at a panel discussion in Bremen, Germany, CNSA administrator Zhang Kejian and his US counterpart, National Aeronautics and Space Administration (NASA) chief Jim Bridenstine, both indicated they'd be interested in bilateral cooperation despite increased competition between their two countries.

During a panel discussion at the 69th International Astronautical Conference on October 1, Zhang said, "CNSA is willing to join our hands with other international partners for the benefit of human civilization and progress of human society," Space News reported. He later specified NASA as such a partner in a follow-up question.

"I had a very good discussion with NASA Administrator Mr. Bridenstine for bilateral cooperation in this particular area," Zhang said. "I think the response was very positive."

"We do cooperate in a lot of ways, but that doesn't mean our interests are always aligned," Bridenstine said, noting that cooperation in scientific fields takes place despite the US Congress' Wolf Amendment, which blocks bilateral cooperation between the two agencies without Congressional approval. "Some of these decisions are going to be made above the pay grade of the NASA administrator."

"To the extent that agencies and countries from around the world can cooperate on space, it is absolutely in our interest to do so," he added. "I look forward to exploring more opportunities to do that."

Zhang said he believes that "the working teams of both sides can start preparation of a cooperation list. We can dash out those that cannot be implemented now, or are above our pay grade, and then we can start cooperating on the substantial part," including the exchange of scientific data and space situational awareness information, Space News reported.

Bridenstine agreed at a press conference later that day. "They're doing some amazing scientific experiments," he said, citing the Chang'e-4 mission. "We can share data and collaborate that way so that each country can learn more about science."