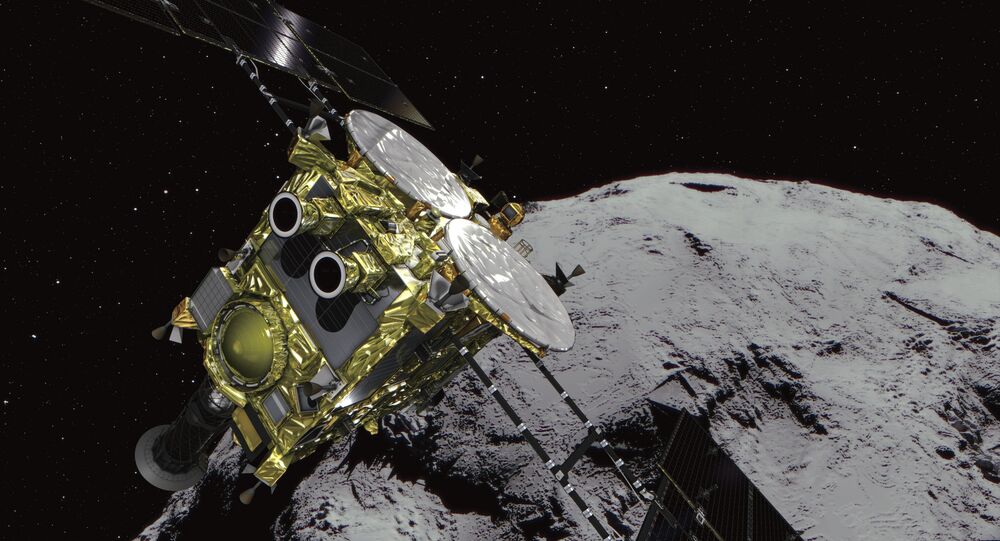 Japan’s space agency has successfully landed two rovers on an asteroid for the first time in history. The robotic explorers were dispatched to the Ryugu asteroid from the Hayabusa-2 spacecraft on Friday. Scientists say that studying asteroids could help shed light on the formation of the Solar System 4.6 bln years ago and the evolution of Earth.

Sputnik: This is such an exciting mission and this is, I think, a unique mission and the first of its kind. Could you please share some of the challenges that you encountered in preparing and executing this mission?

Dr. Yuichi Tsuda: I will especially explain how difficult the rover's mission that we made last week [was]. Our rovers separated from the mother spacecraft 55 meters above the asteroid surface — that left them just a 3 cm per second release velocity, so at such a low altitude, a very gentle separation, very accurate calculation for this operation. It occurred as far as 300 million kilometers away, so I think you can imagine it must be very difficult.

Sputnik: Can you tell us in detail about what this mission will entail? What will the rovers do?

Sputnik: Usually when we send things to outer space, we send them to huge heavenly bodies like the Moon. What is the size of an asteroid in comparison to the Moon? This is quite tiny isn't it? Does it make it more difficult to actually land a rover on this kind of heavenly body?

Dr. Yuichi Tsuda: Yes, the asteroid Ryugu is just 900m across, so it means the size itself is very small and also the gravity is very, very small. So if you drop rovers from very far, they can easily miss the asteroid and fly away; if you drop rovers too fast and make them hit the surface very hard, they can easily break. If you drop the rovers in the wrong place, they can easily get stuck between rocks. We have to release the rovers at a very low altitude, very gently, to a very limited place. That's very different from our landing on the Moon or other big planets.

Sputnik: Why wasn't this done before? Obviously because it's very difficult, but was there some kind of breakthrough in technology that allowed you to do this? Or were just the first people brave enough to try to do something like this?

Dr. Yuichi Tsuda: I think the reason is just because it's very challenging. The breakthrough for us is the perfect combination of ground control and spacecraft autonomy and everything has to be perfect to realize this rover landing. Some past missions attempted to put landers on an asteroid or comet surface like the Near Earth Asteroid Rendezvous (NEAR) Shoemaker mission of NASA and Rosetta mission of ESA, but none of them tried to make the rovers move on the asteroid surface and Japan actually attempted to do a single mobile rover landing in the Hayabusa-1 mission 13 years ago, but it failed. So we ourselves have already experienced how difficult such an attempt is. We're proud that this time we have succeeded with two rovers landing at once and both of them actually hopping across the asteroid in perfectly healthy condition.

Sputnik: Very exciting, but tell us why this 900 meter asteroid — Ryugu — why was this chosen for the mission?

© AP Photo / Nick Ut
Boeing’s Takeover of Satellite Firm Further Consolidates Space Defense Industry
Dr. Yuichi Tsuda: Generally asteroids sometimes are called fossils of the solar system. They were born a few billion years ago without weathering nor chemical change because of their very small size. To know an asteroid is like knowing our solar system and the asteroid Ryugu is a special kind of asteroid believed to contain water and carbon-related materials. Water and carbon are very important for any life on Earth, so we think exploring such a celestial body should bring us fruitful scientific knowledge on how life in our solar system was born and how life has bloomed, especially on Earth.

Sputnik: So what kind of samples will it be collecting? I guess soil and rock samples, but is there any chance that anything living could be on this, if there's carbon on that asteroid is there any possibility that we could see any signs of anything that was once alive?

Sputnik: I understand that there is also going to be a crater created by these rovers; can you tell us why this is important? How will this be done?

Giant Asteroid Headed Toward Earth is Visible to Human Eye