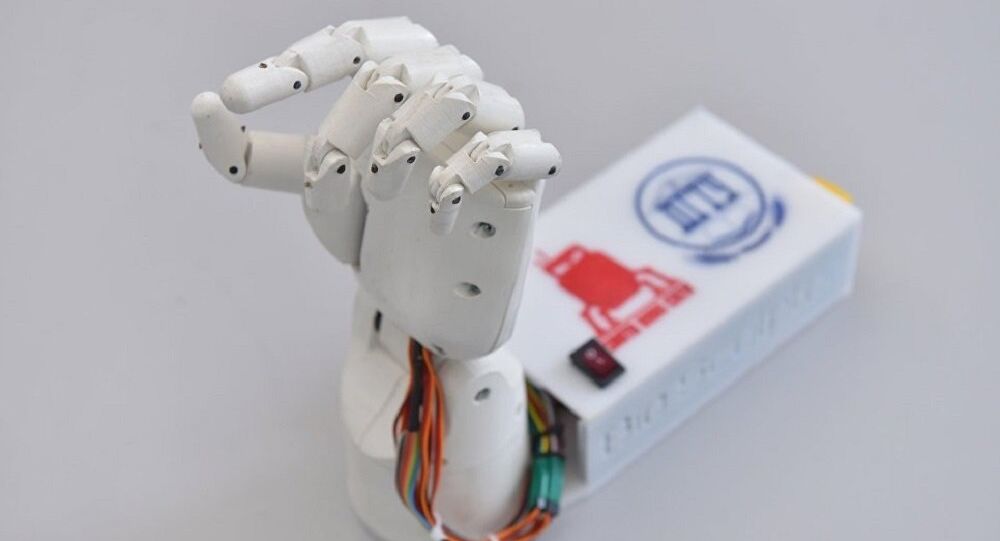 The e-NABLE project involves thousands of volunteers from all over the world. Some of them print parts of prosthetic limbs using their own 3D printers. Others assemble the prostheses and test them for usability. Jon Schull visited the 2018 Moscow Maker Faire organized by FabLab of the National University of Science and Technology MISiS and spoke to Sputnik correspondent about social volunteering opportunities.

Sputnik: Mr Schull, how did you come up with the idea of developing prosthetic limbs and the e-NABLE project?

Jon Schull: About five years ago, I was supposed to be preparing for a university class that I teach. Instead, I was watching YouTube videos and I saw one about a carpenter in South Africa who had had a shop accident and had found a puppet maker in Washington state who had made a mechanical hand that was operated by strings.

The video explained that they had spent a year working together and they had come up with a simple mechanical 3D-printable hand and they realized they could help lots of children born without fingers. And it said that they had put their designs online. That was the first time I thought about this.

People started calling me, saying, "Now what do we do?" So I created a Google+ community called e-NABLE to figure out what to do together. And that took over my life. That's how it got started.

Sputnik: Why did you decide to rely primarily on volunteers in the production and distribution of prosthetic arms?

Jon Schull: Volunteers can address needs that governments and businesses and NGOs have failed to meet. They don't need to make money, they don't need professional certification. And since many amputees get nothing, what the volunteers can do is really very valuable.

So we found that we could take advantage of the fact that there are people who have 3D printers all over the world who get tired of making chachkies and little gadgets and find that they can make something really valuable and important and they can invent new solutions and have them put to use, which is a real pleasure and a real thrill.

© Photo : NUST MISIS
Jon Schull, a researcher of the Rochester Institute of Technology

Sputnik: Do you have any volunteers in Russia?

Jon Schull: To my knowledge, we don't have volunteers in Russia, which is surprising. And it's about time we did something about that.

Sputnik: Did prosthetic limbs become more accessible for people with disabilities thanks to the volunteers?

© AP Photo / Victoria Jones/PA
Nothing Sacred: Woman Asks Thieves to Return Her Artificial Limbs
Actually, you can do pretty well if you're missing an arm. You can't really do well socially if you're missing a hand or an arm. So these devices, even though they are nowhere near as effective as a real arm or even a real prosthetic arm produced by research doctors, can have a huge benefit for children who will no longer be bullied by other children (in fact, now they are even the envy of other children). Adults can hold their child's hand or use it for some kinds of work.

While we have only helped 5,000 people so far, those are people for whom the alternative was nothing. And I think we can potentially help more than 5,000.

Sputnik: What story had the greatest impact on you?

Jon Schull: I had an experience only a few weeks ago in Honduras where I met someone without both arms who had an e-NABLE arm about a year ago. He said he wears it every day. I asked: "So what is the most useful thing you do with your arm?" When I asked the question he was holding his three-year-old daughter's hand. And he said: "This is the most important thing I do with my arm."

And indeed, the girl was hanging on to the arm and it was obviously a very important relationship. And he was missing both arms. So this was the one arm that he could use to go for a walk with his daughter.

So this goes to show that the social function of these devices is very important and it doesn't even have to be a medical-grade device to serve that purpose. So that story about a father and a daughter once again made me realize that what we're doing has a great deal of meaning even if the devices can be improved.

Sputnik: How do you plan to develop the e-NABLE project?

Jon Schull: We started with fingers for people who had palms but were missing their fingers. We created wrist-controlled hands. Then we developed elbow-controlled arms (assuming you had an elbow). Now we have a mechanical elbow. If you have one good arm adjusted it will hold on to things by itself. Now we are working on sockets and harnesses to attach it. So we are working up to the entire arm. We are also working on legs.

But I think what's important about e-NABLE is not 3D printing and not prosthetics but the notion that there are hundreds of thousands of people around the world who have access to maker technologies and who are thrilled with the possibility of being able to make something important that people need.

So my goal is to expand the e-NABLE model to where it's not just 3D printing and not just prosthetics but the development of various devices that especially help people with disabilities.

Sputnik: Do you think this kind of cooperation can solve other problems in the world?

© Photo : Pixabay
'Simply Move': Prosthetic Technology Offers New Hope Spinal Cord Injury Victims
Jon Schull: I do. This is a model of volunteers partnering with people who have unmet needs and doing it for satisfaction, not necessarily to make a business or to make a living. It would be nice if volunteers could make a living out of it but very few of us get paid to do this. Nonetheless, we find it very rewarding and very productive and often have the side effect of some income.

This model of volunteer humanitarians or makers for good can reach people that governments, businesses, and NGOs have failed to reach. So a global community of volunteers, inventors and problem-solvers can collaborate in a very inexpensive fashion, which is a new opportunity to solve problems. This movement could be the fourth pillar of society, along with governments, businesses and non-government organizations, that can fill gaps in institutional solutions.