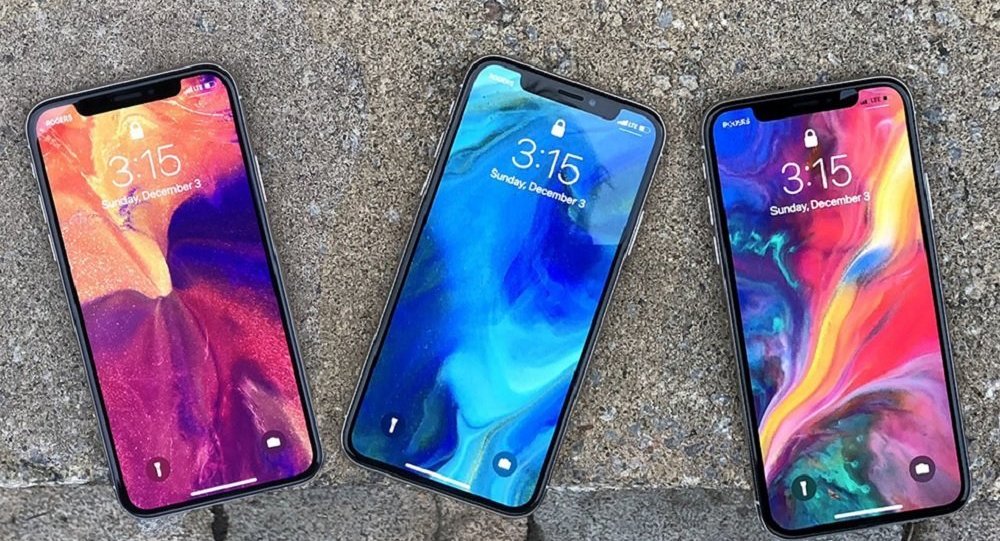 The phone manufacturer presented not one, but three different models of its trademark smartphone.

Apple unveiled a family of three new iPhones at a presentation at the company's headquarters in Cupertino, California, Wednesday.

The new phones, presented by Apple CEO Tim Cook, are named XS, XS Max and XR, and share a design similar to that of last year's X, with the absence of the trademark single Home button being the most prominent design change. As with the X, the screens of the new phones runs from edge to edge, in an attempt to maximize screen width for visual applications, such as photos and videos.

The only thing that intervenes in the screen's surface is a thin black strip that contains all the required tech stuff, such as both normal and infrared cameras, a proximity sensor, a flood light and the "dot projector," an essential part of Apple's much marketed, if somewhat controversial, FaceID feature.

© AP Photo / Mark Lennihan
‘A Tax on US Consumers’: Trump Tariffs to Push Apple Product Prices Up
No, there's no fingerprint scanner anymore.

The XS is basically an upgraded version of the X, equipped with a new A12 Bionic processor. The new phone also comes with a "golden" chassis and 512 gigabytes of internal memory. The battery is said to last some 30 minutes longer than that of the X, and the new phone supports two SIM modules.

​The XS Max is basically a larger version of the XS, being about the size of the iPhone 8 Plus. Its screen is 6.5 inches long, the largest iPhone screen yet. Due to its larger size, it also features a larger battery, which is said to last 90 minutes longer than that of the X.

​The XR, on the contrary, is the cheaper version. While sporting the same new A12 processor, it is fitted with an LCD screen instead of an OLED display. Its sides are made of aluminum, not steel, and its main camera is single-lensed, not double. The XR compensates for those deficiencies with a variety of chassis colors.

© CC0 / Pixabay
Chinese Police Reportedly Prevent $79 Million iPhone Smuggling Op via Drones
The company also presented the Apple Watch 4, which has received some major upgrades that turn the device into pretty much a wearable health monitor. The smart watch is now capable of displaying the electrical activity of your heart in the form of an electrocardiogram (ECG). Its sensors detect if the wearer experiences a hard fall, and, should they not move for some time (about a minute), it will automatically call an emergency service — a useful feature for people suffering from epilepsy or just prone to passing out.

​The watch can also analyze your heart rate for indicators of risk of a coming heart attack. Therefore, the Apple Watch appears to be more of a medical device, and as such, it has undergone US Food and Drug Administration (FDA) certification and actually received a clearance for its ECG app.

"The FDA worked closely with the company as they developed and tested these software products, which may help millions of users identify health concerns more quickly," FDA Commissioner Scott Gottlieb said in a statement, according to Los Angeles Times.