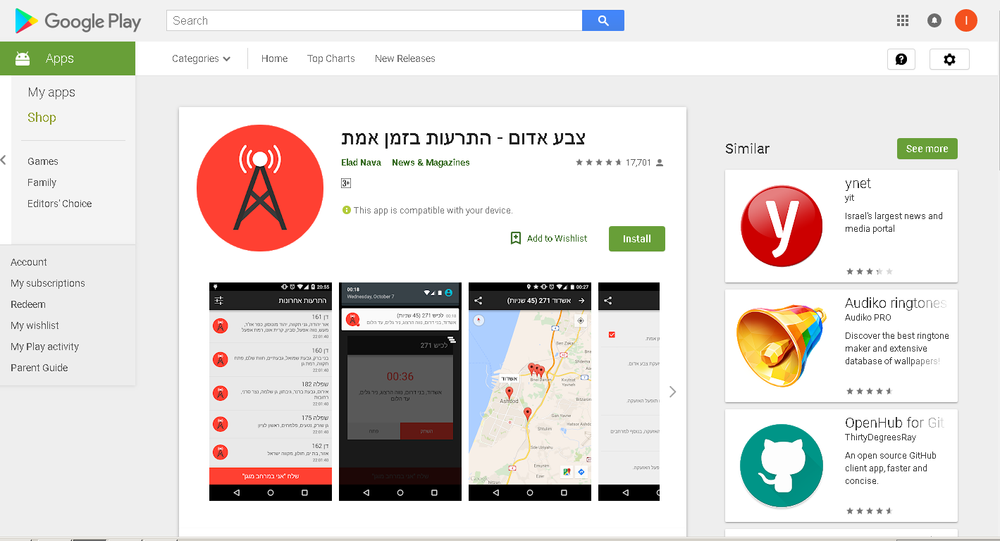 A ceasefire between Israeli and Hamas authorities, which came into force on Thursday after 24 hours of intense fighting along Israel's southern border with Gaza, seems to have had no effect on an escalating online war.

Israeli cybersecurity company ClearSky Cyber Security has warned that the Hamas militant group has created a fake version of CodeRed, a popular rocket attack app that warns users to take cover upon the detection of a suspected rocket attack on Israeli territory.

"When you download the (fake) app it takes control of the mobile phone and allows the operator to track the device, record sound and make calls and send messages," ClearSky CEO Boaz Dolev said, speaking to The Times of Israel.

© Sputnik / Vladimir Trefilov
Fired Israeli Cyber Company Employee Steals Secret Spyware, Tries to Sell It on Darknet
According to Dolev, once the fake app is downloaded, it is impossible to remove, even by deletion. Fortunately, he said, the app had been discovered early on before it managed to infect many phones. The company official recommended that people download apps only from recognized online merchants like Google Play or Apple.

According to ClearSky, the phony app may be the first stage of a broader campaign by Hamas to wage a cyber war against Israel amid escalating violence along the country's southern border.

Haaretz reported Thursday that Israel and Hamas signed an Egyptian-supported ceasefire agreement whose terms include a cession of Israeli military operations pending Hamas refraining from firing any more rockets at Israel. The ceasefire is the third effort to halt violence in the last month.

This week, the Israeli Air Force carried out airstrikes against 150 targets in Gaza in retaliation to the firing of some 200 rockets at Israel earlier in the week. Over 30 of the rockets were intercepted by Israel's Iron Dome missile defense system, with some exploding near the southern Israeli city of Beersheba. The Israeli strikes killed three Palestinians and injured several others, according to Gaza's Health Ministry.

© AFP 2020 / MAHMUD HAMS
Israel, Hamas Agree to Ceasefire - Reports
On Friday, Israeli Minister of Culture and Sport, Miri Regev, advocated the state-sanctioned assassination of Hamas leaders, saying that "if our children live in fear, then the leadership of Hamas should live in fear."

The latest chapter in the violent confrontation between Hamas, other Palestinian groups and Israel began in March, with protesters promoting the right to return to their homelands in what is now Israeli territory and protesting President Donald Trump's decision to recognize Jerusalem as Israel's capital and move the US Embassy there. The violence has led to over 160 deaths and over 17,000 injuries on the Palestinian side, with one Israeli soldier killed by a sniper, and six soldiers and at least 5 civilians wounded in Hamas rocket, mortar, arson balloon, kite and condom attacks.