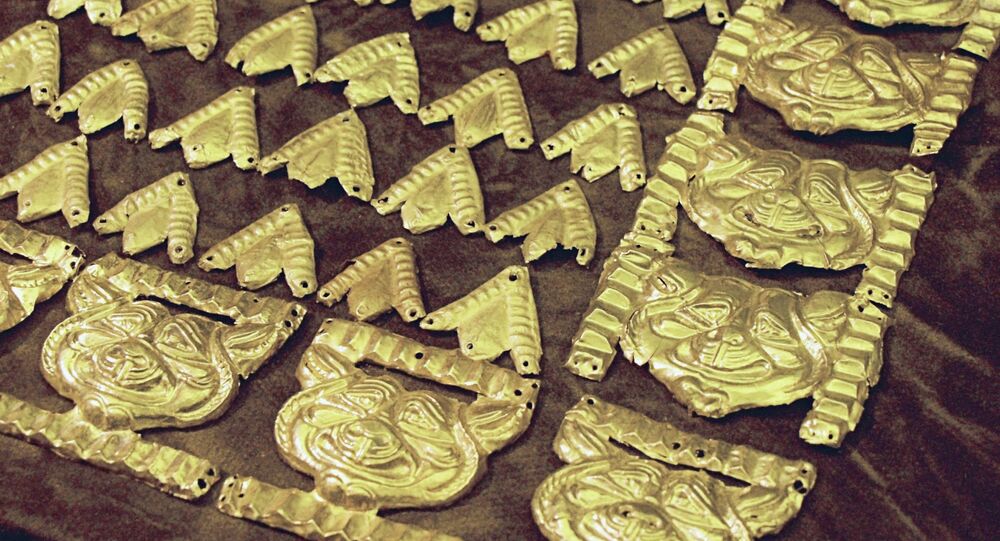 Archaeologists have discovered a “priceless” treasure in one of the kurgans on the Eleke Sazy Plateau, proving the skillfulness of the ancient craftsmen and discovering another lost page of the country’s history.

The Kazakh government has announced a historical archaeological find in the Tarbagatai Mountains in the northeastern part of the country – a trove which dates back nearly 2,800 years. The team of experts has uncovered more than 3,000 golden and precious metal pieces of jewelry, including bell-shaped earrings, gold plates, chains and necklaces, Kazinform reports. Other findings include crafted animal figures, created by the sophisticated craftsmen of the past and a number of golden beads, which were used to decorate the clothes of the ancient people of Saka. “The large number of valuable finds in this burial mound led us to believe that a man and a woman are buried here — the reigning persons or people who belonged to the elite of Saka society,” Professor Samashev, the head of the team, told Kitco News.

The kurgan (burial mound) had been suspected of being an archaeological site for a long time. The first excavations on the Eleke Sazy Plateau in the Tarbagatai Mountains date back to the 18th century under the rule of Russian Emperor Peter the Great. There are nearly 200 kurgans such as this; however, many of the graves were robbed over time. The current mound was first excavated two years ago, but only now is the archaeologist ready to present the results of their excavations to a broader audience. According to the findings, this place could have been the last resort of the elite Saka couple, whose graves are yet to be found.

Archaeologists called the treasure “priceless,” as it reveals mining, trade, gold and ancient metal smelting techniques. “We are the heirs of the great people and great technologies,” said Governor of the East Kazakhstan region Danial Akhmetov, noting that this find could provide a completely new perspective on the history of Kazakhstan.

The Saka were a nomadic nation and spoke a language that is most closely associated with Persian. They were first recorded in the 9th century BC as one of the Scythian groups that ruled over the Eurasian Steppe for centuries. From Central Asia, they expanded into Iran and India. Yet it remains a mystery what happened to them, as historians have very little information about the Saka after this time, with the most recent artefacts being discovered only during the 20th century. The Eleke Sazy Plateau was seen as “paradise” by the Saka kings, the historians said, which is why there are so many kurgans located there. “There are a lot of burial mounds here and the prospects are very great,” leading Kazakh archaeologist Yerben Oralbai told The Sun.

Pre-Historic 'Romeo & Juliet' Rushing to Their Afterlife on 'Chariot' Unearthed