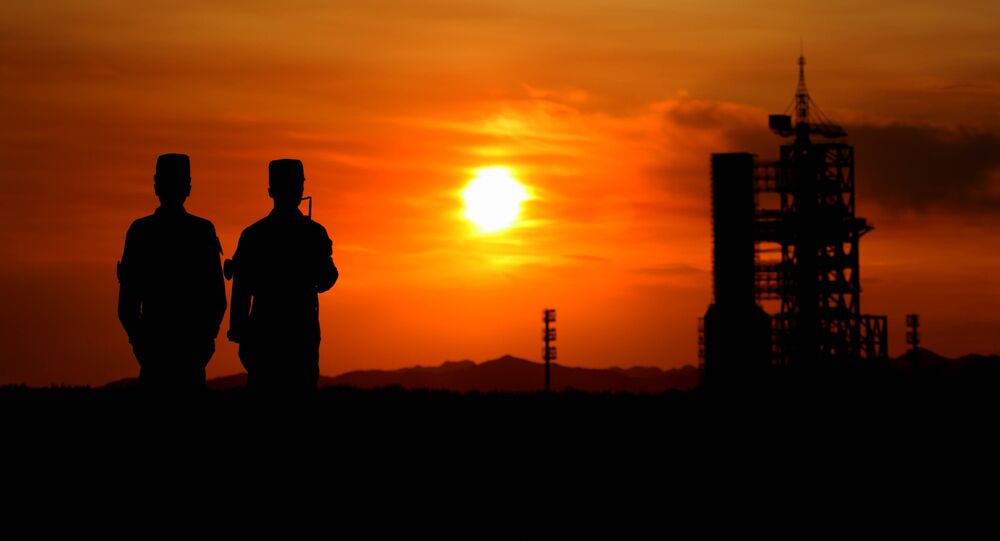 Russia's Roscosmos space corporation and its Chinese counterparts signed a number of agreements on space cooperation last month during a summit between Presidents Putin and Xi. The agreements followed a deal signed in March on Russian-Chinese cooperation in the exploration of the moon and outer space, and the creation of joint orbital groups.

A delegation from China's National Space Administration is set to hold talks with Roscosmos on the possibility of creating a jointly-run orbital station, Sputnik has learned from a source in the space and rocketry industry.

"The delegation's visit to Moscow is planned for the end of this week. The issue of cooperation in the field of manned programs will be discussed with our Chinese colleagues," the source said.

© AP Photo / Cai Yang/Xinhua via AP
China’s Super-Powerful Rocket Under Development Outstrips Europe’s, NASA’s
The Chinese government is interested in Russia's experience with long space flights and the construction of large space projects as it prepares to start construction of a large, multi-module space station within the next few years. In addition, the source said, China lacks access to key technology and is ready to partner with Roscosmos in exchange for Russian know-how.

Roscosmos already has plans to cooperate with China on a variety of space-related projects, including the creation of a super-heavy rocket, which would be necessary for the construction of a large space station and to lift its large components into orbit. In March, Popular Mechanics reported, citing Roscosmos sources, that Russia was considering shifting its human spaceflight cooperation away from the US toward China in the medium to long term.

In 2011, China became the third country in the world after the Soviet Union and the United States to launch an orbital space station. Its Tiangong-1 station reentered the Earth's atmosphere in April 2018 after nearly seven years in orbit. The scientific station was similar in design and purpose to the Soviet Almaz and Salyut series of space stations, and was used among other things to test spacecraft docking procedures and autonomous life support. In 2016, China launched Tiangong-2.

China plans to begin construction on a multi-module station in 2020, with the project set to include three modules and two docking points for spacecraft or additional modules.

© Photo : Wikipedia/NASA
Russia to Deliver US New Rocket Engines As Trump Creates Space Force
The International Space Station's operational lifespan is expected to be expanded by three years; it will remain in orbit until it is retired in 2028. If this does not occur, Moscow plans to detach new Russian ISS modules planned for launch in 2019, 2020 and 2022 and build a Russian orbital station. Russia is also in negotiations with NASA, Europe, Japan and Canada on the Lunar Orbital Platform-Gateway, a planned lunar-orbit space station project.
...
Reddit
Google+
Blogger
Pinterest
StumbleUpon
Telegram
WhatsApp
220

Space Plumbers to the Rescue! US Asks Russia to Fix Its Broken Toilet on ISS

Impact Event: Tunguska Meteorite and Other Space Objects that Have Struck Earth