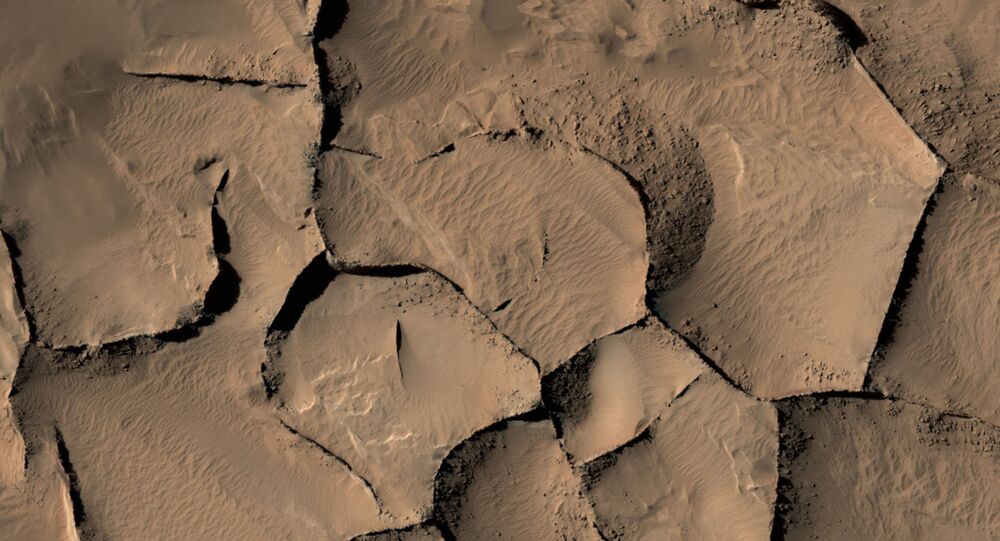 Studying mysterious rock formation on Mars, which is the biggest known volcanic deposit in our solar system, US scholars have concluded that the planet had witnessed numerous eruptions in the past. Billions of years ago, its volcanoes spewed water, ash, and toxic gases, changing the planet's habitability potential forever.

New findings concerning the history and composition of the gigantic Martian Medusae Fossae Formation, which has puzzled scientists for decades, suggest the Red Planet had a series of volcanic eruptions 3 billion years ago. According to a study by a team from Johns Hopkins University, published in the Journal of Geophysical Research: Planets, the disastrous explosions not only formed what is considered to be the largest volcanic deposit in the solar system, but also changed the planet's surface, atmosphere and hydrosphere.

Volcanoes spewed ash, rocks and massive amounts of water and different gases, which altered the climate of the planet. Enough water had been ejected into the atmosphere to fully cover Mars’ surface and create an ocean more than 9 centimeters thick, as Lujendra Ojha, a planetary scientist, said, cited by Phys.org. Greenhouse gases, which were released into the atmosphere during the eruption, created an atmosphere warm enough to keep the water on the surface liquid. However, according to the scholars, toxic gases, hydrogen sulfide and sulfur dioxide were also emitted during the eruption, impacting the planets habitability potential.

The researcher added that new data from a spacecraft in Mars' orbit had helped shed the light on the structure of the Medusae Fossae Formation, which was discovered by NASA in the 60s. Suspicions that the formation was made of rock and ice have been ruled out due to the recently obtained data, which shows that the formation is composed of highly porous rock.

God of War No Match for God of Thieves: Huge Statue of Mars Stolen in Bristol