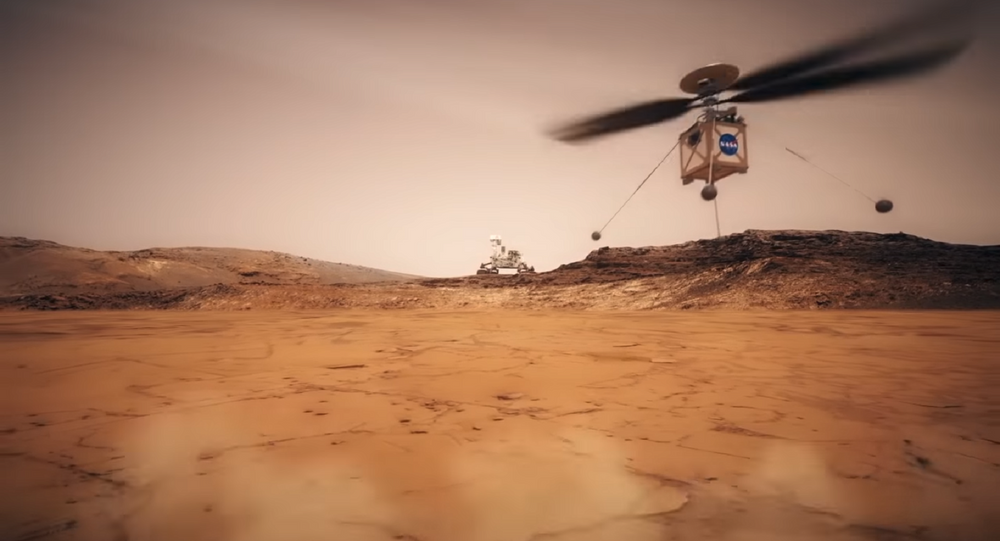 NASA has announced plans to send a small helicopter to Mars on their 2020 mission, which also aims to place a rover from the latest generation on the planet. If successful, it would be the first time humanity has deployed a helicopter on another planet.

NASA
Star Team: Captain Kirk Signs Off on NASA’s New Journey to Get Closer to Sun (VIDEO)
NASA's Mars chopper will be controlled remotely, making it not just a helicopter but also a drone or UAV (Unmanned Aerial Vehicle). "We don't have a pilot and Earth will be several light-minutes away, so there is no way to joystick this mission in real time," said Mimi Aung, the project manager of NASA's Mars Helicopter at the agency's Jet Propulsion Laboratory, in a statement. "Instead, we have an autonomous capability that will be able to receive and interpret commands from the ground, and then fly the mission on its own."

The helicopter has two blades that rotate counter to one another and weighs just 4 pounds (1.81 kg). Its main body section, or fuselage, is no bigger than a softball, according to NASA.

​Because the atmosphere on Mars is 100 times thinner than Earth's, the blades will spin at 3,000 revolutions per minute, which is about 10 times faster than the speed of helicopter blades on Earth. "To make it fly at that low atmospheric density, we had to scrutinize everything, make it as light as possible while being as strong and as powerful as it can possibly be," Aung said.

It isn't even certain that vehicles can levitate on Mars, but the NASA helicopter seeks to "demonstrate the viability and potential of heavier-than-air vehicles on the Red Planet," according to a Friday statement.

The Mars Helicopter has been in development since August 2013 and contains solar cells to charge its lithium-ion batteries along with a heating mechanism, as temperatures during the Martian night regularly reach —67 F (-55 C), and can go even lower.

The helicopter will be deployed from the belly pan of the Mars 2020 rover and is considered critical to future space exploration missions. "The ability to see clearly what lies beyond the next hill is crucial for future explorers," according to Thomas Zurbuchen, associate administrator for NASA's Science Mission Directorate.

© CC0
US, Russia Likely to Go to Mars Together, Former NASA Astronaut Says

"If it does not work, the Mars 2020 mission will not be impacted. If it does work, helicopters may have a real future as low-flying scouts and aerial vehicles to access locations not reachable by ground travel," NASA said in its statement.

The helicopter's first flight will see it climb 10 feet (3 meters) into the Martian air, where it will attempt to hover for 30 seconds. Four more flights, each faster than the previous, will also be conducted over a 30-day period. Eventually, scientists hope the helicopter can remain in the air for 90 seconds at a time.

NASA's Mars 2020 will launch from the Cape Canaveral Air Force Station in Florida in July 2020 and is expected to reach the Red Planet by February 2021.