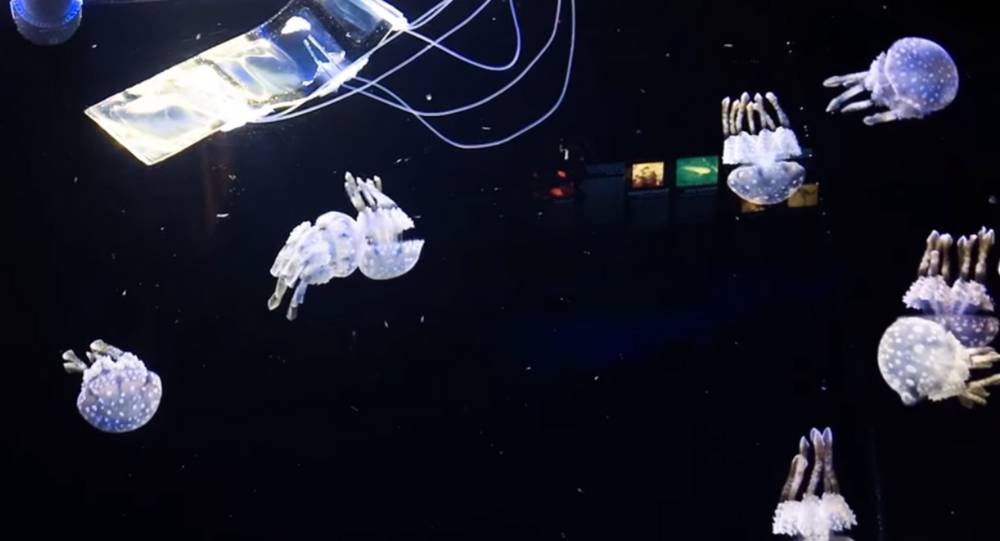 A study published in Science Robotics on Wednesday details an innovative eel-like robot that was created by a team of researchers from UC San Diego and UC Berkeley to better examine marine life.

Researchers noted in their report that the bot is an important step towards a future when soft robots are able to swim alongside fish and invertebrates without scaring them off.

With most researchers using remotely operated vehicles that resemble submarines with propellers, Caleb Christianson, a researcher from US San Diego, said in a statement that rather than propellers, "our robot uses soft artificial muscles to move like an eel underwater without making any sound."

​The robot, which is about a foot long, is powered by cables that apply voltage to the salt water surrounding it and the pouches of water inside the bot that act as artificial muscles. According to the study, the negative charges are sent to the water immediately around the bot while positive charges are delivered inside to activate said muscles, allowing the bot to swim.

Officials were careful to note that the charges carry very little electricity so as to not endanger nearby marine life.

"Our biggest breakthrough was the idea of using the environment as part of our design," Michael Tolley, a professor at UC San Diego, said. "There will be more steps to creating an efficient, practical, untethered eel robot, but at this point we have proven that it is possible."

"This is, in a way, the softest robot to be developed for underwater exploration," Tolley added.

The team's pride and glory was tested inside a saltwater tank filled with jellyfish, coral and bony fish at the Birch Aquarium at the Scripps Institute of Oceanography at UC San Diego.

Going forward, researchers plan to improve the the robot's geometry and reliability with the ultimate goal of building a head for the bot that would carry more sensors.