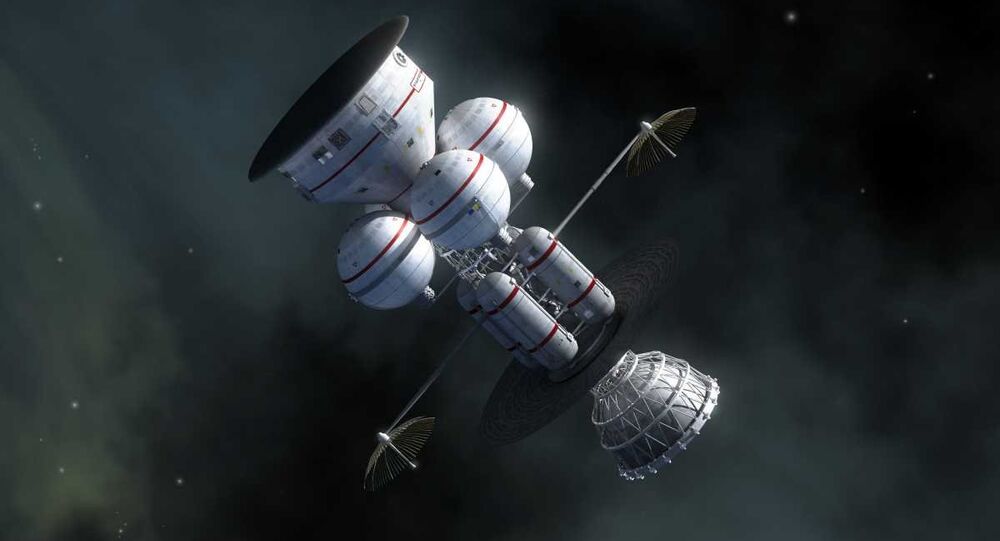 Spaceships using conventional hydrogen-oxygen fuel will be able to take people to the moon, Mars or Venus. But human exploration of other planets in our solar system, and beyond it, will require the creation of ships harnessing the power of nuclear fission and nuclear fusion, including via the concept of nuclear pulse propulsion.

The idea for a rocket propulsion system that makes use of explosive combustion was first proposed by Russian explosives expert Nikolai Kibalchich in the late 19th century. However, it was Polish-born American nuclear physicist Stanislaw Ulam who came up with the concept of using nuclear explosions to power spacecraft. Ulam came up with the idea in 1947, a decade before the Sputnik 1 satellite and the dawning of the space age. Ulam's proposal envisioned the use of a metal shield attached to the ship to harness the power of a nuclear explosion and push the ship forward.

In the late 1950s, American scientists led by physicists Ted Tailor and Freeman Dyson began work on Project Orion, a program to create a model of a nuclear pulse propulsion system-powered spacecraft. The Project Orion vehicle concept included a nuclear pulse unit and coolant storage tanks, a pusher plate and two stages of shock absorbers to absorb the energy from nuclear blasts and propel the ship forward, along with a payload section to the front of the ship.

In addition to its speed, the concept was touted for theoretically being able to carry a payload an order of magnitude above that of conventional fuel rockets. Scientists estimated that if a nuclear charge was detonated once every three seconds, the ship would be able to reach 3 percent of the speed of light, thereby allowing humanity to reach Alpha Centauri, the closest solar system outside our own, in about 140 years.

Speaking to Rossiya Segodnya science contributor Tatyana Pichugina about Project Orion, cosmonautic, historian and science fiction writer Anton Pervushin explained that the idea was attractive in the fact that "only with the help of a nuclear pulse propulsion system can a spaceship accelerate to significant relativistic speeds." In this way, Pervushin noted, "the distant planets of our solar system will become accessible, and it will become possible to organize the first interstellar expedition."

Naturally, the concept of nuclear-explosion-powered spacecraft was also explored by Soviet scientists, including physicist Andrei Sakharov, the father of the Soviet hydrogen bomb. With a spacecraft dubbed "vsryvolet" (literally "explosion-flier"), the Soviets' work was focused on the possible use of the concept for large, long-distance space exploration.

Sakharov's concept, dubbed PK-5000, was aimed at using explosions to power ships with a payload of 1,000 tons or more and 10-20 cosmonauts.

Work on Project Orion, and its Soviet analogue, was halted in 1963 following the signing of the Partial Test Ban Treaty, which prohibited nuclear weapons testing in Earth's atmosphere, in space and underwater.

In 1971, German-American physicist Friedwardt Winterberg published a scientific paper proposing the use of thermonuclear-powered reactions triggered by intense electron beams as a means to accelerate spacecraft. According to space historian Willis L. Shirk, the energy produced by a nuclear fusion reaction is an estimated 26 million times greater than that of a conventional hydrogen-oxygen propellant, and over 4.3 times than that of nuclear fission.

© CC0
US, Russia Likely to Go to Mars Together, Former NASA Astronaut Says
In 1973, scientists from the British Interplanetary Society formed Project Daedalus, a vision for a nuclear fusion-powered propulsion system.

Tatyana Pichugina writes: "Thermonuclear fusion occurs inside stars. Creating it on Earth would require immense temperatures and hydrogen or hydrogen-helium fuel. Calculations have shown that the energy of thermonuclear fusion of a mixture of deuterium and helium-3 could enable flight speeds of 36,000 km per second, or 12% of the speed of light. At such speeds, Daedalus would be able to reach the star of Bernard, 5.9 lightyears from Earth, in half a century. For comparison, the Voyager 1, currently the world's fastest spacecraft, accelerated to 17.02 km per second through its gravitational maneuver near Saturn."

Structurally, Project Daedalus envisioned a large 50,000 ton fuel tank, out of which small amounts of deuterium/helium-3 mixed fuel pellets would be sent to the combustion chamber for detonation every second, with the resulting plasma exhaust stream directed via a powerful magnetic nozzle. The unmanned vessel would carry a 500 ton useful payload consisting of scientific equipment.

Work on Project Daedalus was canceled in 1978. In 2009, British Interplanetary Society scientists supported by the Tau Zero Foundation began work on Project Icarus, its spiritual successor.

Icarus envisions sending multiple probes across multiple solar systems within 15 light years of Earth to carry out detailed studies of stars and planets. Like Daedalus, the project requires helium-3 for fuel, which can be found in ample quantities on Neptune or Jupiter, but which is scarce on Earth. Based on the current pace of technological development, such foreign-planet mining, and hence such a mission, may not be possible until the year 2,300.

Ultimately, Anton Pervushin believes that so long as the nuclear test ban treaty remains in force, nuclear pulse propulsion will inevitably remain a theoretical concept. Furthermore, as Pichugina explained, in addition to legal issues, a number of technical questions remain unresolved. These include how to apply fuel to the combustion chamber, how to amortize acceleration, how to protect crews from cosmic radiation, and in general determining the most efficient types of spacecraft.

Still, as Pervushin noted, if humanity wants to escape the bonds of our solar system and send large spacecraft to those close by, nuclear pulse propulsion remains the only realistic option.

© Photo : YouTube/Kot Begemot
Screenshot from a Soviet educational film on nuclear-powered rocket engines for use by spacecraft.

The Soviet space program pioneered and worked to improve the technology with the Kosmos series of satellites, which, while generally successful, had their reputation somewhat marred following the emergency descent of Kosmos 954 in 1978, which spread radioactive debris over northern Canada.

The Soviets continued to experiment with these technologies well into the late 1980s, and even envisioned the use of nuclear fission-based energy as a realistic means to reach Mars.