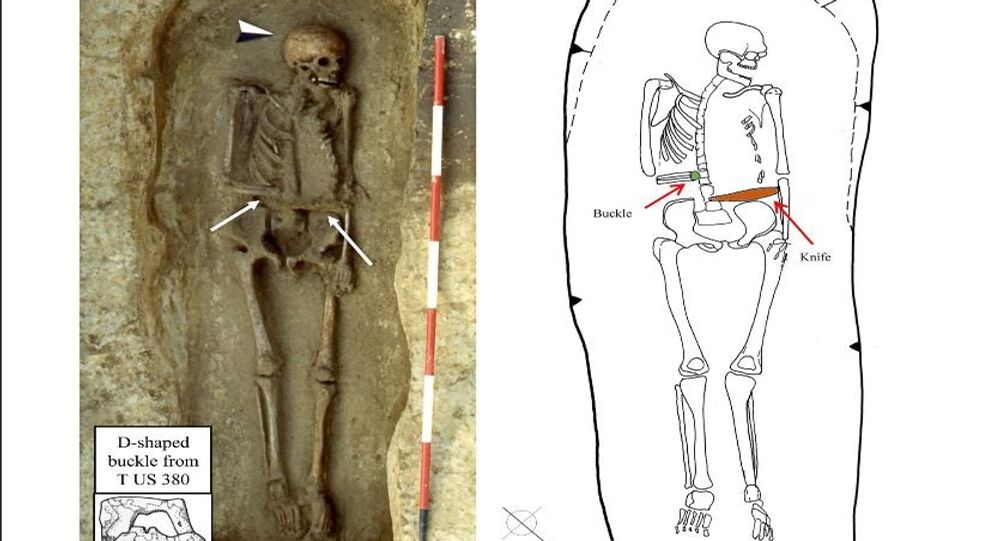 Sir Scissorhands: Remains of Man With Knife for a Hand Found in Italy (PHOTO)

This odd-looking medieval warrior may have been the common ancestor of Edward Scissorhands, Ash from Evil Dead, and Merle Dixon from The Walking Dead.

Archaeologists have unearthed an astonishing human puzzle, which looks like a man’s remains and dates back to the Middle Ages. The guy was obviously a soldier, who lived his life with his arm amputated and a knife-shaped prosthesis attached to the body instead.

More likely, his fake arm actually ended with a knife, which served the function of the lost hand and which he might have fixed with his own teeth. The latter, also found nearby the location, appeared to be significantly worn-out, featuring a huge loss of enamel and a bone lesion.

© CC BY 4.0 / Journal of Anthropological Sciences
Buccal view of surface wear of the RI2 (A and B); type and orientation of wear is a clear indication of the extra-masticatory use of the tooth, which shows a crown significantly reduced (if not obliterated) in comparison to the left second incisor. (C) X-ray of the right upper second incisor tooth, notice the periapical lesion located at the proximal end of the root, T US 380. The lighter col - oured bone around the margins of the exposed tooth roots RI2 is the result of post-mortem damage

Researchers spotted the skeleton during archeological work in a Longobard necropolis in Northern Italy and it is estimated to be 13-15 centuries old.

The researchers, led by archaeologist Ileana Micarelli from Sapienza University in Rome, determined that the hand had been removed after the man fell or suffered from blunt force trauma to the head, but no one can tell for sure.  Given the war-focused culture of the Longobards, the limb might have been lost in fighting.

Interestingly, the amputated limb had a cap on it, apparently made of leather, which suggested that the man had lived for a long time after the trauma, having taken the then possible measures to prevent infections.

"This Longobard male shows a remarkable survival after a forelimb amputation during the pre-antibiotic era. Not only did he adjust very well to his condition, he did so with the use of a culturally-derived device, along with considerable community support," the research team wrote in their report for the Journal of Anthropological Sciences.