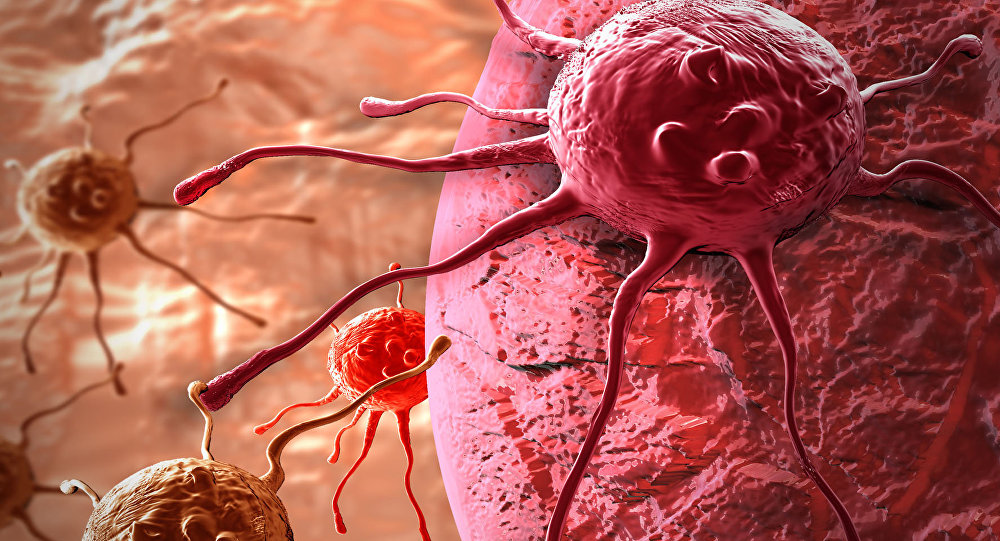 The unusual protein, found in the skin cells of human beings and other warm-blooded animals, has a molecular structure similar to that of the toxins of snakes and other reptiles.

Molecular biologists from Moscow State University and the Russian Academy of Sciences have discovered proteins that can help suppress the growth of cancerous tumors.

The genomes of human beings and other multicellular organisms contain several sets of genes with special 'instructions', calling on their cells to self-destruct when certain conditions are met. Usually, these reactions are triggered not as a result of internal cellular processes, but through contact of cell membranes with specific signal-sending molecules. This allows the immune system to kill 'rebellious' cells which threaten to cause cancerous tumors, and clear the organism of weak and old cells.

BeTa-Artworks
Sweet Science: Russian Scientists Come Up With Healthy 'Golden' Chocolate
Dr. Mikhail Shulepko of the Russian Academy of Sciences' Institute of Biochemistry, coauthor of a new study on the subject, explained that special proteins in mammalian skin cells have been found to have a structure similar to that of toxins of snakes and other reptiles. However, unlike their toxic 'cousins', which work to block the transmission of nerve impulses, the mammalian proteins, called SLURPs, act not on the nervous system, but on all cells in general, and speed up or slow down their growth.

The scientists' find prompted them to consider whether such proteins could be used to fight against cancer as a kind of 'stop signal' against the proliferation of cancer cells. They tested this idea by growing skin, breast, lung and rectum cells in a lab and treating them with large quantities of the SLURP-1 and SLURP-2 proteins.

Their research, published in the British Journal of Pharmacology, showed that both proteins significantly slowed the growth of nearly all types of cancer, blocking the work of special receptors on the surface of cells which cause them to divide. The biologists found that after a day of such treatment, the number of cancer cells dropped by 40-70% compared to tumor control samples.

Furthermore, the injection of large quantities of SLURP-1 and SLURP-2 proteins into the cellular nutrient medium caused cancerous cells to produce even more of these same molecules, leading to a chain reaction and resulting in the cancer cells to essentially destroy themselves.

"We will continue to study how SLURP works on other cancer models, including cell cultures of primary tumors, as well as human tumors implanted on the bodies of laboratory animals. If these effects are confirmed, it will be possible to consider clinical studies for our proteins," Dr. Shulepko said.

According to the biologists, more work is still required to determine how exactly these proteins cause cancer cells to self-destruct, and what role they play in the work of the body.