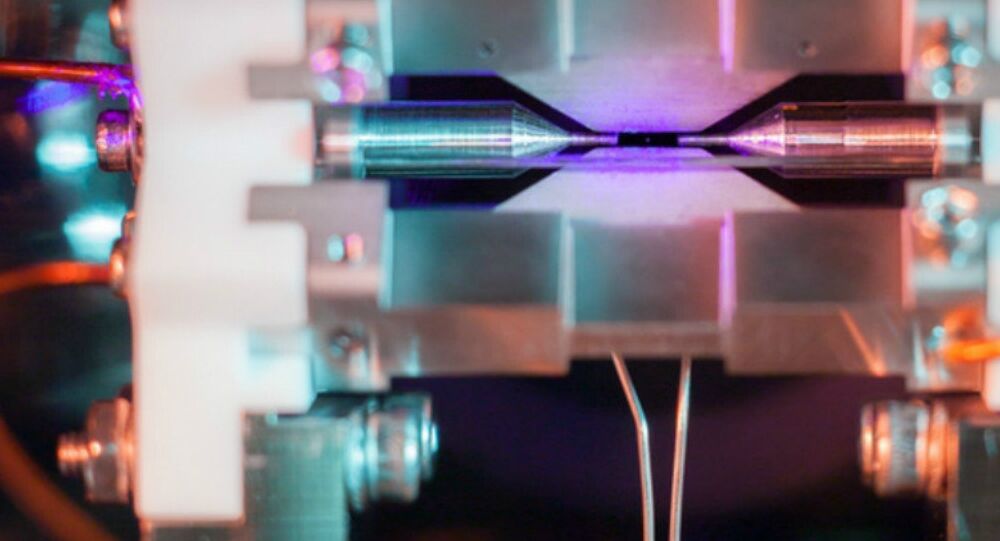 The photo, titled 'Single Atom in an Ion Trap', shows, without the use of magnification, the glow from a single, positively charged strontium atom as it is suspended motionless by electric fields between two metal electrodes. The atom is held inside an ultra-high vacuum chamber and cooled to help keep it still.

David Nadlinger was able to capture the photo of the atom with an ordinary Canon 5D Mark II camera through a long exposure shot by illuminating it with a blue-velvet-colored laser, with the atom absorbing and reemitting light particles fast enough for the amazing shot to be taken. A single strontium atom has a radius of about 215 billionths of a millimeter across, meaning that observing it with the naked eye is possible only by using this illumination technique.

© CC0
Move Over Hawking: New Observations Challenge Current Cosmological Model
"The idea of being able to see a single atom with the naked eye had struck me as a wonderfully direct and visceral bridge between the minuscule quantum world and our macroscopic reality," Nadlinger said, speaking to the EPSRC.

"When I set off to the lab with camera and tripods one quiet Sunday afternoon, I was rewarded with this particular picture of a small, pale blue dot," he added, evoking the famous 'pale blue dot' remarks of American astrophysicist Carl Sagan in reference to planet Earth.

Strontium atoms are used to create atomic clocks, other extremely accurate sensors, and as building blocks for quantum computers.