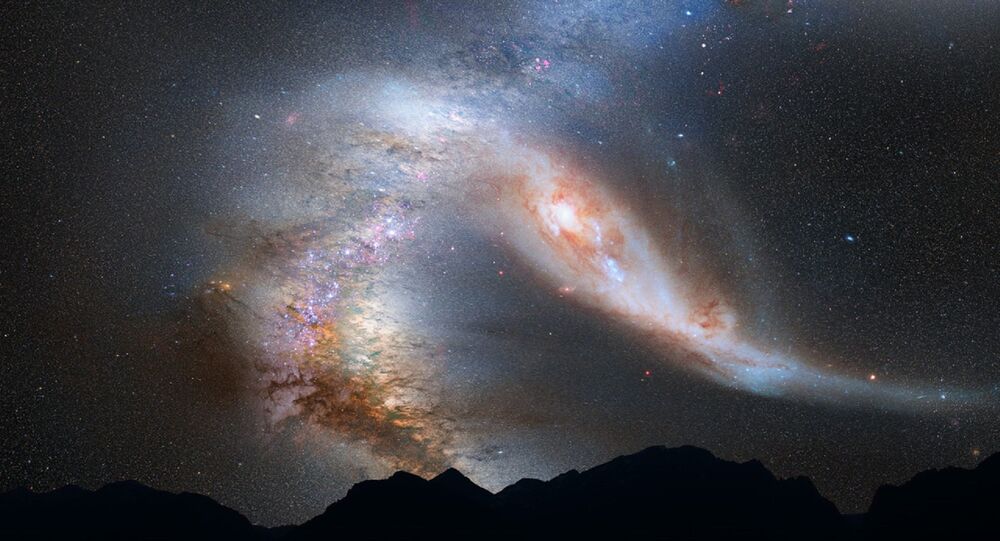 Under the current cosmology model, known as λCDM, dark matter, which makes up a vast majority of the known universe, creates a sort of gravitational framework, influencing the movement of our galaxies and other large objects in space. Cosmologists love this model, because it answers a lot of questions and works well.

© AP Photo / Isaac Gomez/INAH
'Floating' Stone Sanctuary Allegedly Representing Universe Uncovered in Mexico
However, one of the consequences of the λCDM model is that so-called dwarf, or ‘satellite,' galaxies, should orbit a host galaxy like a cloud, a ball, or, for a better scientific analogy, like electrons around the nucleus of an atom.

But they don't. According to a review by Ars Technica, two closely observed galaxies — our Milky Way and our nearest galactic neighbor the Andromeda Galaxy — have their smaller satellite galaxies arranged like a disc. Yes, those satellite galaxies more or less orbit their hosts in a plane, like planets orbit the stars.

Scientists used to dismiss these two occurrences as a statistical quirk. But then a third was noted: Centaurus A, whose satellite galaxies are also seemingly aligned in a single plane.

Why does it happen? Cosmologists admit: they don't know.

"There is no obvious answer, unfortunately, or maybe expectedly — otherwise planes of satellite galaxies would not be seen as a problem and we wouldn't talk about them as much," said astrophysicist Marcel Pawlowski of the University of California, Irvine, who co-authored the study with fellow astrophysicist Oliver Müller of the University of Basel and other colleagues.

Astrophysicists say more data is needed. Either observations of the known universe are playing a bad joke on our statistics, or our entire cosmology model must be reviewed. But, surprisingly, the scientific community is not quite ready to do that, yet.

"It would take very strong evidence of an insurmountable problem to give up on λCDM, or at least a model that looks very much like it," said astrophysicist Mike Boylan-Kolchin of the University of Texas, who commented on the study.

"My money is on λCDM, but it would be thrilling to find out that it is wrong," Boylan-Kolchin added.