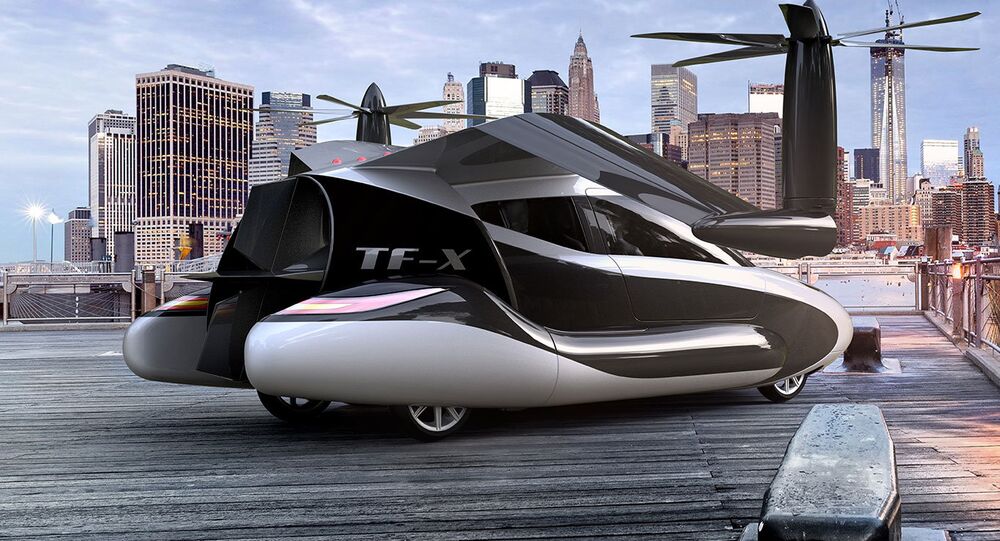 The French company Zapata, which first brought hydroflight to the world, has tested its new machine, named Zapata Ezfly. Sputnik has taken a look at the craziest flying vehicles that are poised to replace self-driving cars as the hottest trend.

Zapata tested a jet-powered aerial “Segway,” which looks like a small platform equipped with a series of jet thrusters and two handgrips to push you through the air, with a top speed of 80 mph. The Ezfly is built on the basis of Franky Zapata’s Flyboard Air, which kicked-off this whole venture for the company. While it may seem that it is the “Segway of the sky” that anyone can fly, with riders requiring little training to control the flying hoverboard, this may be deceptive. Unlike the Flyboard Air, a rider does not strap his boots in, but rather just stands on the platform while hanging onto the control sticks.

While the training session was conducted in October 2017 in Texas, the footage was uploaded to YouTube only on January 18.

Probably everyone wants to get home as quickly as possible after a long day at work so they can enjoy a long soak in the bathtub. Now, The Real Life Guys have taken this desire and devised an even better solution! With their creation you won’t even have to wait get home; you can easily jump into the passenger-capable drone, which is, by the way, also a bathtub that will “fly” you home. These 20-year-old German twins, whose idea may seem absurd on the surface, claim that “life is for strange adventures.” They have definitely proven their point.

It appears, though, that they had to process a lot of information and put significant effort into learning how to create this outrageous contraption, using a metal frame holding the bath and supporting the motor and propellers.

Naturally, the first test flight revealed certain shortcomings in weight distribution that could lead to water splashing onto the heads of people below, or a crash and hospitalization for the brave soul taking his aerial bath. When they had successfully tackled this tricky issue, they carried out a human flight, albeit the bath wasn’t filled with water; while a pilot controlled the flight from the ground.

A cute-as-a-bug car will fly you straight into the future thanks to the Massachusetts-based aerospace/automobile company Terrafugia. Terrafugia Transition, first tested in 2009, appears to be a prototype automobile-aircraft, which is designed as a roadworthy, wing-folding, two-seat flying car. In 2016, the Federal Aviation Administration (FAA) granted a “light sport aircraft” weight exemption to the vehicle, making it one of the first commercially viable flying-car concepts.

The company promises that the Transition will have a cruise range of 400 miles in the air, with top speeds of up to 100 miles per hour, and will drive at highway speeds on the ground.

Terrafugia has shown that it has yet more in store when it presented The TF-X flying car, which, unlike Transition, will be a four-seat, vertical takeoff and landing electric vehicle, having a cruise range of 500 miles in the air, with top speeds of up to 200 miles per hour. According to the company, the price is expected to be “consistent with high-end luxury cars.”

The company expects to deliver its first flying car to the market in 2019, but has not disclosed the purchase price. Terrafugia has also announced plans to launch a vehicle capable of vertical takeoff and landing by the year 2025.

The Kitty Hawk company, which is backed by Google co-founder Larry Page and headed by Google X founder Sebastian Thrun, has almost made the dream of owning a flying vehicle come true. They have introduced a hi-tech aircraft prototype called the Kitty Hawk Flyer, which was successfully tested in San Francisco in April 2017.

This all-electric version is designed only for use over water, and looks more like a human-sized drone rather than flying car. The company equipped the vehicle with two rotors on all four sides, with a total of eight; the pilot appears to sit on top of the aircraft while using a joystick to control the flight. The Flyer can reach speeds of up to 25 mph, but is only for recreational purposes. The FAA rated it as an ultralight aircraft, which means that no pilot license is required to operate it.

Israeli company Urban Aeronautics, which specializes in vertical take-off and landing vehicles, tested the Cormorant (formerly known as AirMule), a single-engine unmanned craft, in 2015. According to the company’s statement, internal lift rotors “enable the Cormorant to fly inside obstructed (e.g. mountainous, wooded, urban) terrain where helicopters are unable to operate,” and will be used in search and rescue operations.  The aircraft is said to be able to ferry in excess of 500 kilograms of cargo per sortie with a 50 kilometer, capable of delivering about 6,000 kilograms over a 24 hour period.