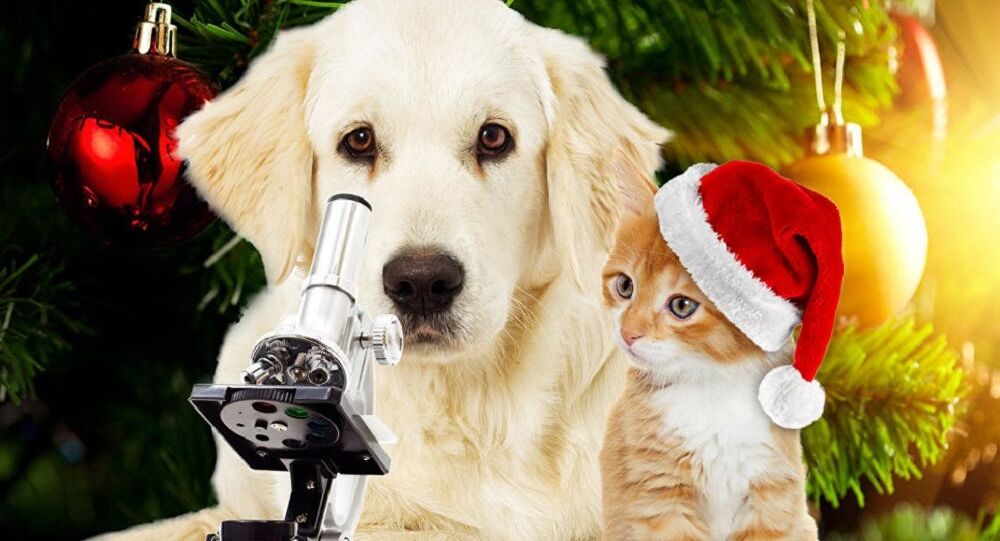 6 Wacky and Wonderful Ways Scientists Worldwide are Celebrating the Holidays

Christmas and New Year's give scientists the world over a perfect opportunity to show off their creativity and achievements, all with a sense of humor and in the spirit of the holiday season.

Sputnik takes a look at a half-dozen ways scientists prepared for the holiday season in 2017.

Scientists in the UK have created the world's smallest Christmas card. With a size of just 15x20 microns, the card, literally microscopic, beats the previous record by 10 times, and is so small that 200 million of the cards could fit onto a postage stamp. The card cannot be seen by the naked eye.

Created by scientists at the UK's National Physical Laboratory, the card, made out of platinum-coated silicon nitride, a common material used for making electronics, features the phrase "Seasons Greetings From NPL," along with a cute illustration of a snowman.

Catarina Moura, a postgraduate researcher from the University of Southampton, is working on a new technology to help monitor the internal structure of cells using an innovative laser-based imaging technique which can be used for regenerative medicine. In the spirit of the holidays Moura created micrographs of a tiny, tiny Christmas tree and wreath from stem cells.

The green spots in the picture are collagen cells, while the red ones are fat cells; both are extracted from human bone marrow.

Science lab workers often decorate their labs with plastic Christmas trees and other decorations during the holidays. However, one redditor decided to take things a step further, using test tubes, clamps and molecule models and crafting an elaborate 'Chemistree'.

Here is our lab’s “Chemistree”. from pics

The Chemistree has gone over well on Reddit, with users making plenty of science-related puns.

A chemistry club on the Russian social networking site VKontakte decided to rustle up some holiday cheer by posting a model of hexatret butyl-hexabenzocoronene, a hydrocarbon with an unusual six-point symmetry very similar to that of a snowflake.

In the center of the 'snowflake' are six benzene rings, forming superbenzene, found in nature in the mineral Carpathite, a mineral first discovered in Ukraine's Carpathian Mountains in 1955. The hexatret butyl-hexabenzocoronene 'snowflake' features an additional six benzene rings, and six hydrocarbon radicals. The compound has a number of properties with prospects for use in the electronic and optoelectronic industry.

In the Monoceros Constellation about three thousand light years from Earth are two objects known as the Christmas Tree and Snowflake Clusters, named for the pattern of a snowflake and a Christmas tree in which they appear to astronomers. The latter cluster can be observed in the night sky year-round, even with the naked eye. So if you're outside an urban area, the sky is clear, and you're in need of some holiday cheer, just look up at the celestial Christmas tree in the heavens.

© CC BY 4.0 / ESO / NGC 2264
NGC 2264, featuring the inverted Christmas Tree cluster above the cone. The Snowflake nebula in the center shows up better on an infrared version of the image.

Until a couple decades ago, all the knowledge accumulated over the millennia by humanity could only be found on paper. Libraries around the world remain important, but, alas, are no longer as crowded as they once were, thanks to the advent of the internet. However, some jokers at a university or college decided to spend the holidays in a library anyway, not reading books, but assembling a life-size Christmas tree out of hundreds of volumes.