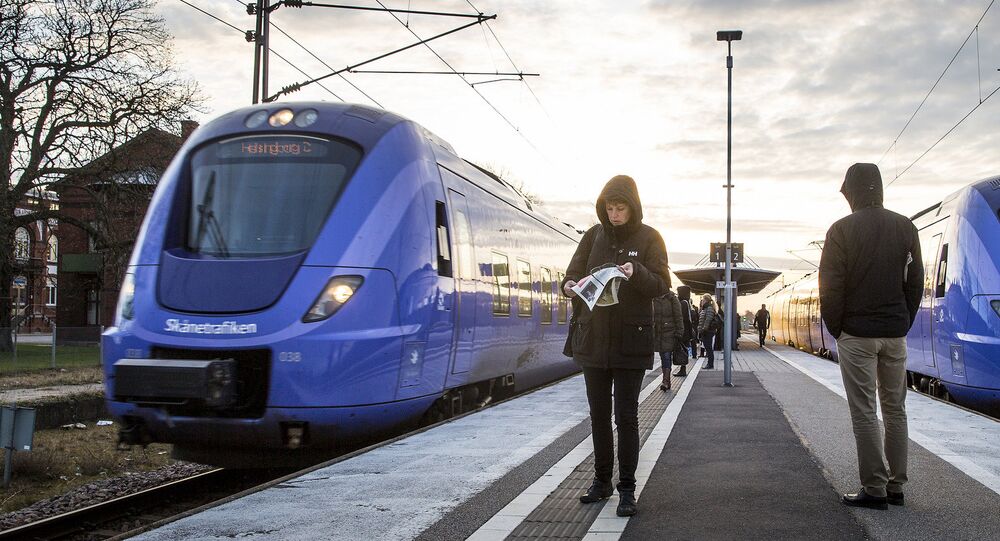 Sweden has taken a new step toward digitalization, as Swedish Railways became the first in the world to offer a new ticket type in the form of a microchip implanted in the hand.

The world is becoming increasingly digitized, and Swedes are pioneering the trend of using microchip implants for their own convenience. So far, about 3,000 Swedes have elected to graft microchips containing personal data.

Microchips can be used in a number of ways, including public transportation, as Sweden's national railway operator SJ became the world's first carrier to offer its customers this innovation.

SJ business manager Christoffer Löfquist himself has joined the Nordic nation's growing horde of "cyborg" passengers after having a chip installed between his fingers, a handy way of always having his ticket along. The chip is barely visible in the area between the thumb and the index finger and is read by special devices using radiowaves.

© AP Photo / James Brooks
Swedes Microchip Themselves, Become Guinea Pigs in Digital Dystopia
In addition to railway travels, Christoffer Löfquist uses his chip every day to open the door of his training center. Also, his business card can be conveniently conveyed via an electronic handshake using a smartphone.

"Why should not you? The technology is available and our customers will like it. So we think it's fun to try it out. Also, it is much easier than producing one's mobile phone. It's another level of convenience, Christoffer Löfquist said.

So far, the chips do not have GPS, and can only deliver the information they contain. However, many critics believe that a more wide-spread use of the technology will lead to more surveillance, infringing on personal liberties. Löfquist, however, is unperturbed about this.

"I'm not worried about that. The chip is dead anyway. There are no batteries in it. It does nothing as long as no scanner is applied," Löfquist ensured.

Likewise, the SJ official is unruffled by hacking threats, which he doesn't even consider a considerable risk.

"That's fine by me. Anyway, it is the same as with a credit card. You can also hack it," Löfquist said.

After a year's trial run, SJ will decide whether it will continue with ticket implants.

​In neighboring Denmark, however, the new microchip craze has not reached the same scope, despite the enthusiasm of tech aficionados.

"I got one grafted into my hand because I've always been fascinated by technology and the idea of cyborgs, as a sort of fusion of man and machine," technology journalist Anders Høeg Nissen explained.