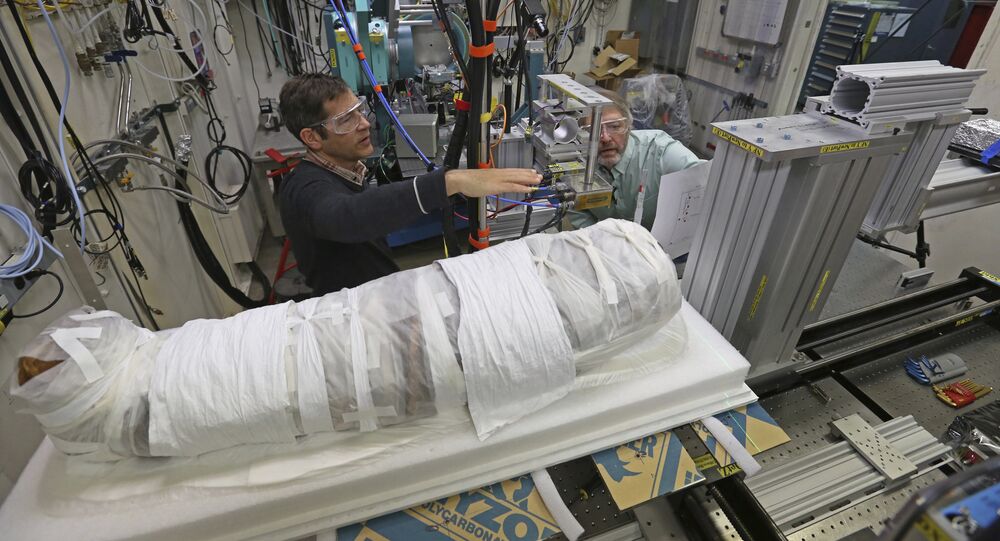 Doctors at the Crouse Hospital in Syracuse, New York, diagnosed cancer in a 2,000-year-old Egyptian mummy using a computed tomography scan this week.

The mummified body of a man, nicknamed "Hen," was found to have an uncommon type cancer.

"He had a tumor on his fibula, which is one of the two bones of the lower leg. It had all the characteristics of a malignant tumor and one that's somewhat rare. So here we have a rare circumstance and a rare tumor and that evoked our interest a lot," Dr. Mark Levinsohn said in an interview aired by syracuse.com.

The mummy was previously sent through a CT scanner in 2006. However, technology has advanced so considerably during the last 10 years that today it was able to provide the level of detail required to make a cancer diagnosis.

"Since that time, the last 10 years, they've upgraded the equipment. What at that time was a 16-detector scanner is now a 320-detector scanner and all that additional information is now derived when we scan the body. So, we can tell all kinds of greater detail," Levinsohn explained in the video.

The numbers Levinsohn is referring to are the number of rows of radiation detector arrays. The detectors in an array convert energy from infrared radiation into electrical signals, which are then converted into "bits" of digital data. The greater the number of rows a CT scanner has, the more detailed the images are.

The first CT scanners developed in the 1980s had only a single row of detector arrays. In 1992, the first scanner with two rows was introduced. By the 1990s, these machines had four detector rows. The scanner that Levinsohn used to diagnose the cancer in Hen has 320 rows. Even though the 16-detector scanner used in 2006 was the most advanced scanner of its kind at the time, it didn't provide the necessary amount of detail for a medical diagnosis.

Even though Hen suffered from cancer, researchers are not certain that cancer was the cause of his death.

"Some things will come out right away, but I think we won't be done with this until at least two or three more months," Levinsohn said, implying that additional research needs to be conducted to further examine the cause of Hen's death.

Hen was brought from Egypt to the Cazenovia Library and Museum in New York by Robert Hubbard in 1984. Hubbard purchased the mummy in Cairo while he was touring Egypt and donated Hen to the library museum as a gift.