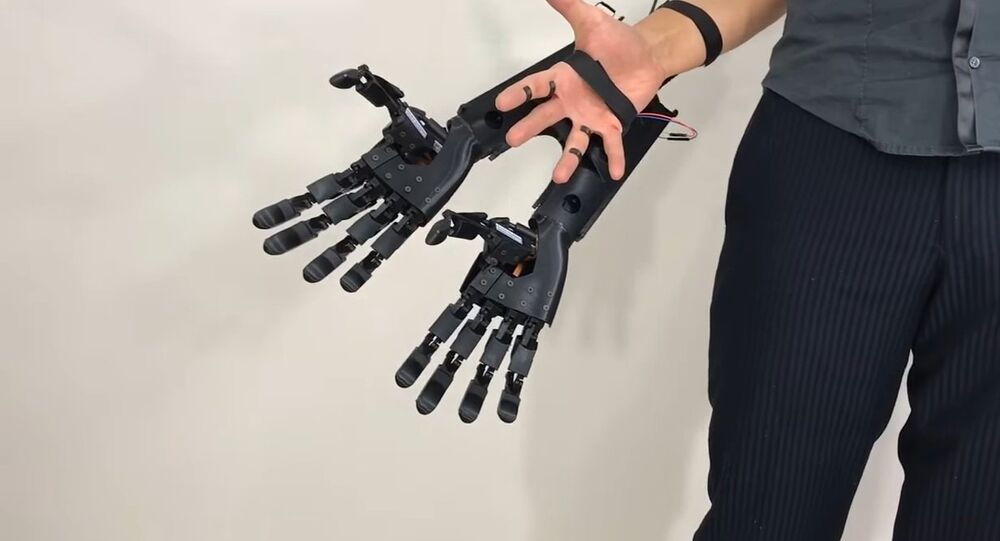 3D Printing Doubles Number of Your Hands, And They All Work (VIDEOS)

Imagine having four extra hands. The possibilities of what one could do with them are endless. This dream is now becoming a reality as tech geniuses have created, through augmented physicality, a glove with two human like arms.

A futuristic company Youbionic has developed a 3D printed glove that puts two hands on the end of a human arm, online tech magazine Gizmodo reported.

Usually artificial limbs are developed in order to make up for lost ones. However, some projects are not dedicated to the development of prostheses, but to strengthening the capabilities of a healthy person using similar devices.

According to Gizmodo the artificial limbs will offer many possibilities such as increasing typing speed, winning Guitar Hero with outrageously high scores and being able to carry extra beers in all four hands.

The robotic hands are limited to a basic open-and-close state at present which is controlled by moving two of the person’s real fingers.

The material used for the robotic hands is 3D printed plastic so it is much lighter than metal but it may not be as durable as the existing bone and flesh.

This is not the first time that mechanical limbs have been developed. For example, last year, US engineers created a robotic third hand for drummers, which could be attached to the drummer's shoulder and played along with it, adjusting to its rhythm.

Recently, the Japanese developed a system of two additional hands, controlled by the movements of the feet.

However, engineers do not always create high-grade mechanical and electrical hands, for example, a graduate of a British college presented for his thesis project a 3D printed additional thumb for the hand, which was also controlled by foot, and simplified holding objects.