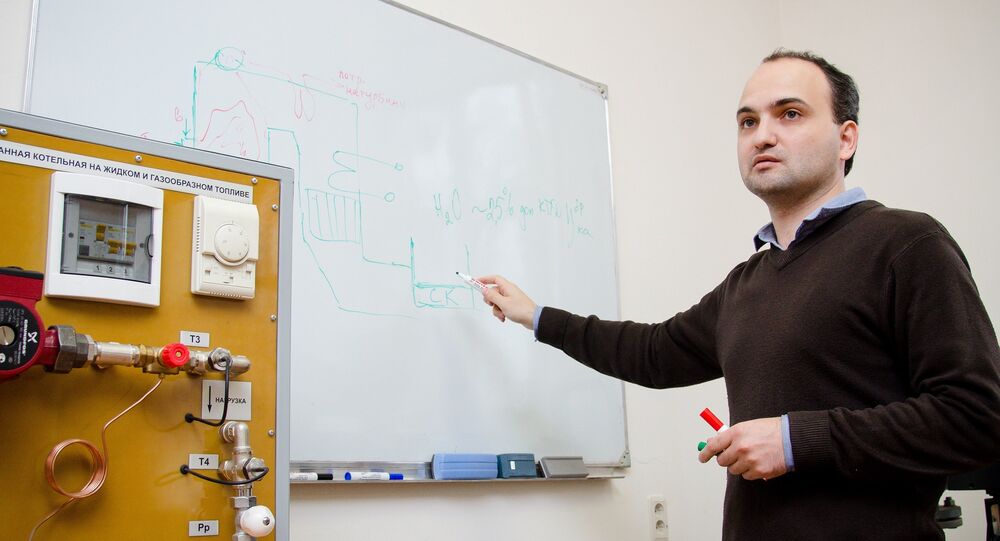 Renewable power generation innovations are widespread in Europe and America. However, most of them are mainly implemented at solar, wind, hydroelectric and hybrid power plants. Osintsev, a scientist at SUSU, sought to couple elements of renewable power generation, particularly solar collectors, with thermal power plants operated using non-renewable fuel resources in order to enhance their electrical power output.

The idea of developing an energy technology system based on solar collectors occurred to him after the scientist studied an experiment implementing contact heat exchangers with active headers performed at Chelyabinsk Iron & Steel Works (Mechel) in the 1980's. At the time, the tests were declared a failure due to the innovation's inefficiency.

READ MORE: Distance Learning at SUSU is Now Available for Students From All Over the World

© Photo : Viktoria Matveichuk
SUSU Scientists Are Developing a New Type of Engine for Electric Vehicles
Similar solutions had been used abroad before; elements of non-traditional and renewable power generation started being actively implemented in the industrial sector. The scientist considered the use of solar collectors to be the most promising means of enhancing electric power generation. SUSU's patented technology calls for stack gases from an air heater to be fed either to a recuperative, or a contact heat exchanger connected to a solar collector's heating tank. The combination of the design's specifics and the way the two mediums are brought in contact with each other provides for an increase in the efficiency of a boiler unit.

The researcher had to solve two main tasks: where and how to install the collectors. He calculated that a solar collector should be installed outside a boiler house for more efficient use of the low-intensity solar radiation.

The energy technology complex designed by Konstantin Osintsev under Project 5-100 is a boiler unit or a power block intended for the generation of steam power.

"The generation of thermal power using organic fuel means inevitable losses which we can't eliminate. Thus, the only way is to try and improve the processes of combustion and the disposal of stack gases. After the fuel combustion process has completed, stack gases are generated, including water vapours. These vapours when condensed may give us an additional increase in the efficiency of the whole installation," explains Konstantin Vladimirovich.

After that, water heated in a heat recovery unit should be used in the thermal envelope of a power plant. Depending on the capacity of the power block's boiler unit, the efficiency may be significantly increased, undoubtedly offering an economical advantage.

© Photo : South Ural State University/Oleg Igoshin
SUSU Scientists Are Modeling 'Perfect' Medications Without Side Effects
If certain modifications are applied to a heat recovery unit, it may be turned into a contact heat exchanger with an active header, which would allow for the direct condensation of water vapors from combustion products. During condensation, aggressive gases, such as nitrogen or sulphur oxides, also become condensed, and the already-cooled gas is emitted into the atmosphere, what is more ecologically friendly.

In the future, this innovation may be implemented not only for thermal energy generation, but also in the housing and utilities sector, at small-capacity boiler houses.

The scientist is planning to create laboratory benches and a test prototype, and then to try to commercialize the latter.

"If as a result of creating the laboratory benches we understand that we need patents for additional parts of the heat recovery unit, we will make them our intellectual property, and after that we will be addressing organizations and offering them to implement our innovation. Our heat recovery unit is universal and may be used almost in any region," says Mr. Osintsev.

Using systems based on solar collectors in the future may help solve some of the problems related to the consumption of energy resources, which is a timely issue for the Chelyabinsk Region. Implementing such installations will partly help in saving, as well as in reducing the dependency on coal.