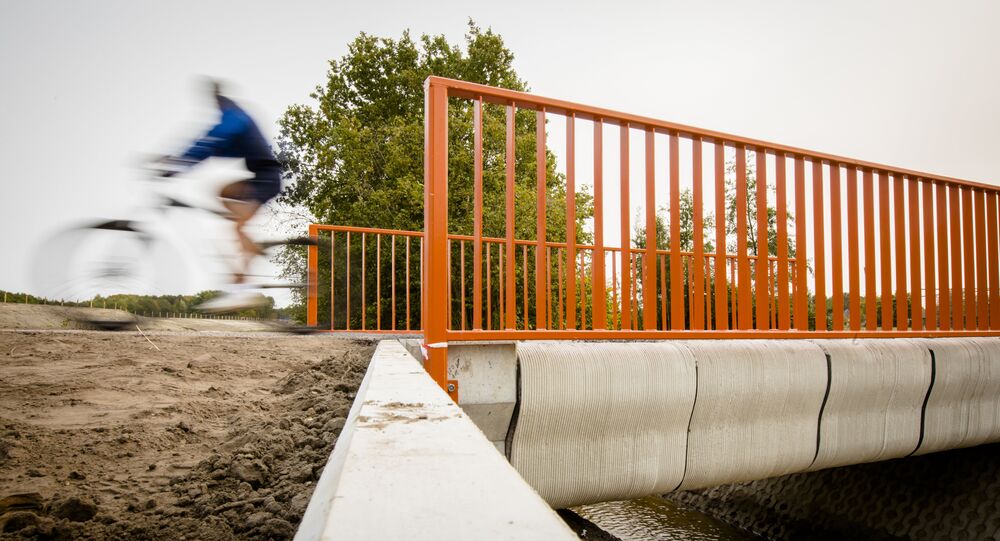 The new structure is considered to be the first of its kind, and was made using an innovative 3D-printing technique that reduces waste.

A unique bridge, which is said to be the world's first 3D-printed crossing for cyclists, was unveiled in the small Dutch town of Gemert on October 17. Designed and built in about three months by a team of engineers from the Eindhoven University of Technology and the construction company BAM Infra, the bridge was printed in pieces from 800 layers of a concrete mixture and reinforced with steel cable.

"The bridge is not very big, but it was rolled out by a printer, which makes it unique," Theo Salet of the Eindhoven University of Technology told Dutch news broadcaster NOS. Eight meters long and just three and a half meters wide, the bridge can handle a weight of up to five metric tons and is expected to last for at least 30 years.

Youtube / Sputnik
Russia's Magnificent Crimean Bridge Gets New 5,500-Ton Road Arch
According to engineers, there are several advantages to 3D-printing structures like this. First of all, it requires less concrete than the conventional technique. A printer deposits the concrete only where it is needed. Therefore, the amount of CO2 emitted during production is lower and waste materials, as well as the time and cost involved, are reduced to a minimum.

The rightful title of first-ever 3D-printed bridge belongs to another crossing, which was installed in the urban park of Castilla-La Mancha in Alcobendas, Madrid, Spain in December 2016. The pedestrian bridge, designed by the Institute of Advanced Architecture of Catalonia and made up of eight separate 3D-printed parts, spans 12 meters and measures just 1.75 meters in width.