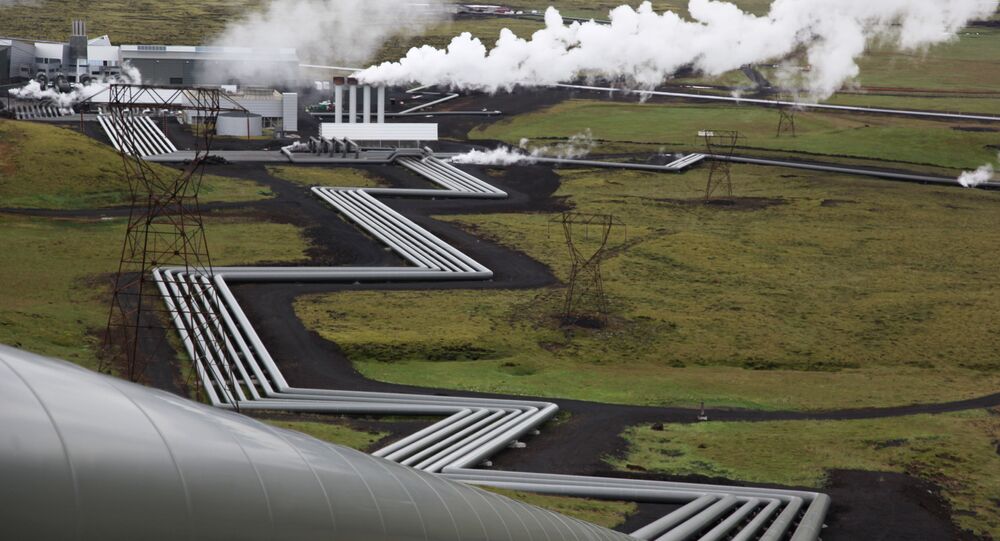 An Icelandic company specializing in carbon-emissions reduction has launched a joint project aiming to capture carbon emissions from a nearby geothermal power plant, storing the pollutants in a petrified form for millions of years. It’s a rosy picture of a green future, but is it true?

Swiss company Climeworks AG has entered into an Icelandic carbon-emission capture project partnership at the Hellisheidi geothermal power plant, intending to store airborne pollutants as solids to prevent their return to the atmosphere, a Quartz report claims.

Carbon capture is an emerging technology that allows carbon dioxide (CO2) to be absorbed when air containing the pollutant (or any other gaseous mixture) is blown over absorptive material. The atmospheric "scrubbing" technology appears to be particularly useful when installed on factory and power plant smokestacks.

© CC0 / Pixabay
Renewable Energy Industry Hotting Up as World Goes Cold on Nuclear Power
As with all new technology, it doesn't come cheap. Sucking CO2 from the air could be priced as low as $100 per metric ton at some point but for now it is calculated to be prohibitively expensive, even for developed countries with deep pockets. Considering the some 50 tons of carbon dioxide are emitted by each US household annually, the cost of the process — even in a best case scenario — is estimated to be in the billions of dollars, and would require heavy government subsidies.

"Even at $50 per metric ton of capturing emissions, if we have to capture as much as 10 billion metric tons by 2050, we are looking at spending $500 billion each year capturing carbon dioxide from the air," according to the Quartz report.

Currently, Climeworks has a single carbon-capture installation located near Zurich, Switzerland, that is said to be capturing about 1,000 tons of CO2 annually. The facility supplies concentrations of the gas to nearby greenhouses, boosting crop yields by some 20 percent.

Now Climeworks will, in Iceland, set up a "carbon-neutral" facility at the Hellisheidi geothermal power plant.

Hellisheidi is the world's third-largest geothermal plant, producing 300 MW of electricity and 130 MW of heat. By way of comparison, Siemens claims that its heavily-polluting coal-fired power plants produce 300-1000 MW of energy annually, and the Leningrad Nuclear Power Plant some 40 miles east of St. Petersburg, Russia, produces a much larger figure of 4000 MW annually.

Proponents of geothermal power boast that Hellisheidi and its counterparts around the world produce just 3 percent of what a typical coal-burning power plant emits in CO2. Now, Reykjavik Energy — Hellisheidi's owner — is attempting, through the use of carbon-capture technology, to rid the geothermal plant of any and all CO2 pollutants.

© AP Photo / Mosa'ab Elshamy
Oil Is Not Enough: Saudi Arabia Wants to Boost Geothermal Energy Production
To accomplish this feat, Reykjavik Energy has created CarbFix, a technology to capture CO2 in water and then pump that carbonated water into the ground. The carbon dioxide then solidifies over time, thanks to vast amounts of basalt rock rich with silicate minerals, the process spanning a handful of years instead of what would under normal circumstances take a millennium.

According to 2016 Phys.org report, Hellisheidi produces 40,000 tons of CO2 annually.

The Quartz report quotes Edda Aradóttir, a CarbFix geologist, who claims that CarbFix has allowed some 18,000 tons of CO2 to be pumped into the ground over last three years, and that discrepancy nonetheless allows for the report to claim that Hellisheidi a "carbon-neutral" facility.

Climeworks has joined the party by adding its technology to the CarbFix carbon-capture chain. Whatever carbon dioxide the system captures out of the Icelandic atmosphere is shoved into the ground along with the rest of Hellisheidi's carbon footprint. The amount of CO2 captured by Climeworks's installation is, however, undisclosed, and, since Hellisheidi is a "carbon-neutral plant," then, with the addition of Climework's scrubbing technology, Hellisheidi would actually become "carbon-negative," right?

A closer reading of the report reveals that the 40,000-ton figure begins to look more like guesswork than actual climate science.

Climeworks nonetheless pats itself on the back for being green, saving the world, and producing guilt-free profit to investors.

"This partnership is helping to realise our mission to capture 1% of global emissions by 2025," the company website reads.

Good for business, right? Not so fast.

© CC0
Norwegians Grumble as Iceland Welcomes Tourists With 'Their' Fjords, Auroras
What remains undiscussed is the pumping of vast amounts of water into the ground, a practice fraught with complications. A 2011 report by Iceland's Visir.is news website says that operations of a power plant near Hengill (presumably Hellisheidi) has caused a swarm of earthquakes near the Hengill volcano. As of September 2011, 250 earthquakes had been reported.

Pumping water into the ground is an essential part of a geothermal power plant's function. Water pumped into the subsurface strata creates pressure on surrounding rocks, inducing seismic activity.

The reaction that petrifies the atmospheric carbon dioxide under the ground to prevent its reabsorption into the atmosphere is known to be reversible, as well. But rock needs to be warmed first, which could easily happen if hot water or steam reaches underground storage areas, thanks to the same seismic activity.

Iceland is a relatively small and extremely volcanically-active landmass, sitting atop an active fault line separating two tectonic plates as they drift apart under the Atlantic Ocean.