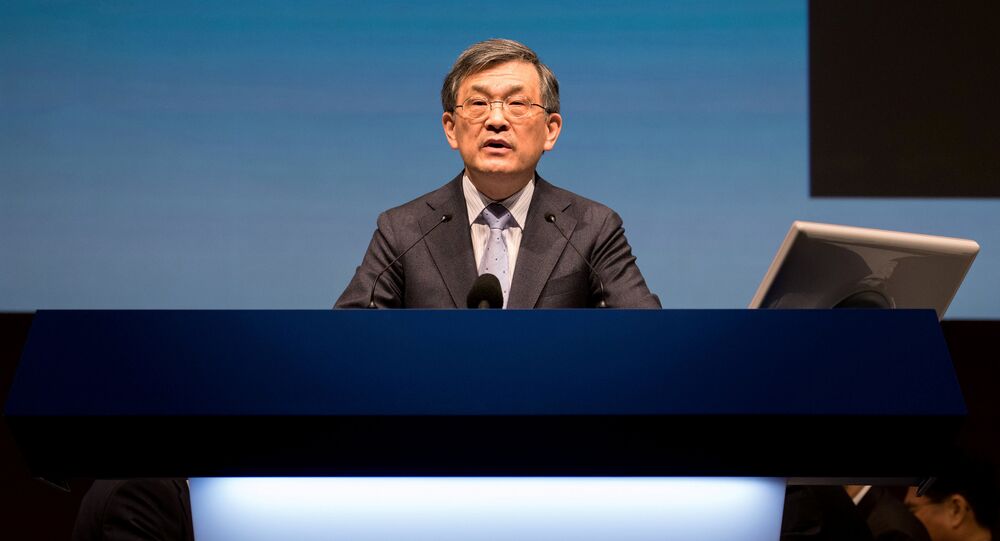 Samsung Electronics press-service said Friday that the company's vice chairman and CEO had decided to resign.

MOSCOW (Sputnik) — The Vice Chairman and CEO of the South Korean technology giant Samsung Electronics, Kwon Oh-hyun, has decided to resign amid an "unprecedented crisis," the company said Friday, adding that Kwon would not seek re-election as Chairman of the Board.

"It is something I had been thinking long and hard about for quite some time. It has not been an easy decision, but I feel I can no longer put it off. As we are confronted with unprecedented crisis inside out, I believe that time has now come for the company [to] start anew, with a new spirit and young leadership to better respond to challenges arising from the rapidly changing IT industry," Kwon was quoted as saying by the company's press-service.

In late August, a South Korean court sentenced another Samsung Electronics Vice Chairman, Lee Jae-yong, to five years in prison after he was found guilty of embezzlement. Nevertheless, the company is performing well in terms of financial results, expecting record profits in the third quarter, despite disastrous the Galaxy Note 7 smartphone recall last year due to a manufacturing defect discovered in its batteries.

© AFP 2021 / JUNG Yeon-Je
Samsung Chief Denies All Corruption Charges at Preliminary Hearing
Kwon will also not seek the re-election as a member of the Board of Directors and the Chairman of the Board when his term ends in March 2018, the company said.

The scandal involving former South Korean President Park Geun-hye and her associate Choi Soon-sil broke out in late October 2016. Park has been charged with forcing major corporations, including Samsung, to donate to foundations controlled by Choi, taking bribes, and forcing companies to sign contracts beneficial for Choi and her associates.

One such deal was a merger between Samsung’s two subsidiaries, Cheil Industries Inc. and Samsung C&T Corporation, which was expected to strengthen Lee's position within the Samsung Group.