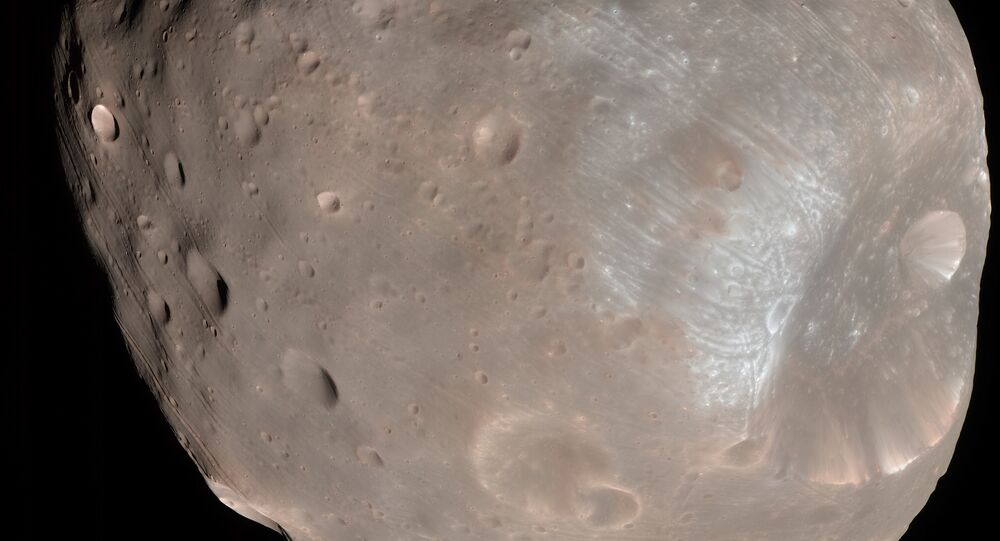 NASA’s Mars Odyssey orbiter, the veteran satellite that has been going strong for almost 16 years, has imaged Mars’ moon Phobos in infrared for the first time ever. The so-called “Death Star” moon is the larger of Mars’ two moons and has long been discussed as a landing platform for missions to the Red Planet itself.

Odyssey's Thermal Emission Imaging System (THERMIS) camera took the photo on September 29, showing off Phobos' unique temperature fluctuations. Phobos' shape (a sphere with a large indent from a crater impact, causing it to resemble the moon space station from Star Wars) has led to a "color coding" of the surface.

"Part of the observed face of Phobos was in pre-dawn darkness, part in morning daylight," said THEMIS deputy principal investigator Victoria Hamilton of the Southwest Research Institute to Space.com.

© NASA . NASA/JPL-Caltech/ASU
This image combines two products from the first pointing at the Martian moon Phobos by the THEMIS camera on NASA's Mars Odyssey orbiter, on Sept. 29, 2017.

The infrared photo also "provides information about how quickly the ground warms, which is related to the texture of the surface," NASA said in a statement. "As barefoot beach walks can confirm, sand warms or cools quicker than rocks or pavement."

Mars Odyssey launched in late 2001 for a 32-month mission — but it has exceeded expectations six times over and will celebrate 16 years of orbit around Mars at the end of October. This makes it the spacecraft orbiting a planet besides Earth with the most longevity, and the longest serving spacecraft at Mars in a walk. NASA expects Odyssey to operate until 2025.

© NASA . NASA/JPL-Caltech/ASU
This image of Phobos is one product of the first pointing at that Martian moon by the THEMIS camera on NASA's Mars Odyssey orbiter.

Its primary mission is to use its spectrometers and THERMIS to detect the distribution of water and ice on Mars. One of the two spectrometers, the Martian Radiation Experiment, was damaged by a solar flare in 2003, but THERMIS and the other spectrometer continue to go strong.

Phobos is more than just a moon that looks like a disco ball in infrared light. It's one of the strangest and most fascinating objects in our solar system. It orbits less than 4,000 miles from Mars — extremely tight compared to our moon which is never closer than 350,000 miles from Earth. It's widely believed not to be a single object at all, but rather a huge pile of rubble held together by a thin crust that will disintegrate in a few dozen million years.

It's also of practical interest to human space agencies, as it could make a Mars landing much more viable. Mars' atmosphere is much thinner than Earth's, but it's still plenty to tear apart an ordinary spacecraft. No manned spacecraft in history has been expected to undergo orbital entry and remain usable afterwards.

Phobos, on the other hand, has no atmosphere and very weak gravity that makes landing and leaving a relative cinch. NASA planetary scientists in the past have recommended that a waystation be built on Phobos that could then be used as a launch platform for Martian missions.