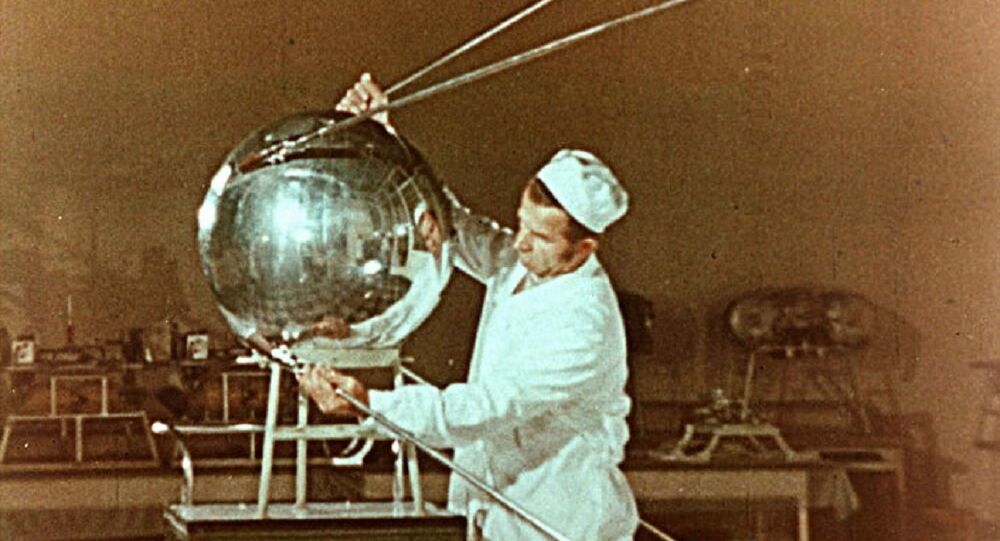 Wednesday marks the 60th anniversary of the launch of Sputnik-1, Earth's first artificial satellite. Sputnik looks back over the history of the epochal competition between legendary Soviet rocket scientist Sergei Korolev and veteran German-American aerospace engineer Wernher von Braun, which ultimately led to a new era for humanity – the space age.

On October 4, 1957 at 7:28 pm local time, Soviet engineers at the Baikonur Cosmodrome in Kazakhstan made history, launching the Sputnik (Russian word for 'satellite') into orbit aboard a modified R-7 Semerka, the world's first intercontinental ballistic missile.

Korolev, the USSR's chief rocket scientist, proposed creating the Sputnik 1 to Soviet leaders in late 1954; Soviet scientists saw the launch of a satellite into Earth orbit as a key stepping stone for the future of advanced rocketry. On the other side of the world, von Braun, the lead Nazi German rocket engineer-turned-US scientist presented his ideas on using rockets for space travel to the US government, military and the scientific community.

In 1955, US President Dwight Eisenhower announced that the US would build and launch an operational satellite sometime between 1957 and 1958 during the celebration of International Geophysical Year, prompting the Soviet Union to speed up its efforts.

For the Soviets, the fact that von Braun had worked for the Nazis, and been extracted from Germany by the CIA's forerunner under the auspices of Operation Paperclip, heightened tensions further. During World War II, von Braun's V-2 rockets had rained destruction on the USSR's British allies, and Soviet and British intelligence kept tabs on him and his projects beginning in 1943.

Braun first made his proposal for what he called a 'World Circling Spaceship' in 1946 in a report for the RAND Corporation. There, he outlined the creation of a 227 kg rocket orbiting at 480 km above the Earth, over a five year period, i.e. by 1951. The US military ignored the engineer's proposal at the time. Only later, when the Soviets were considerably closer to putting the Sputnik-1 in orbit, did US officials begin to listen the scientific and military potential of von Braun's ideas.

© AP Photo /
Dr. Wernher Von Braun, chief of the army ballistic missile agency's development operations, grins in Washington February 1, 1958, as he holds a globe marked with one path of the U.S. satellite. (File)

In the USSR too, scientists had to convince the nation's leadership of the importance of their efforts. Science reporter Anna Urmantseva recalled that one "particularly passionate discussion took place in March 1954." In a roundtable discussion, top Soviet scientists including applied mathematician Mstislav Keldysh, physicist Petr Kapitsa, and Korolev discussed the question "Does science need an artificial Earth satellite?"

Scientists believed such a satellite would lead to many important scientific discoveries, from providing an improved understanding of the Moon's orbit, to improved weather prospects, the study of cosmic rays, and more. But Dr. Keldysh pointed out that the project wouldn't be cheap – costing something close to the annual budget of the Academy of Sciences.

But the Sputnik project would be saved by Kapitsa, Urmantseva noted. The scientist stressed that an artificial Earth scientist would break new scientific ground. "Here, we are entering the unknown, and this always brings science fruits which cannot be foreseen ahead of time, but which will surely arrive. An artificial satellite must be created," he emphasized.

Subsequently, in May 1954, soon after the government approved the construction of the R-7 rocket for military use, Korolev sent a report to Defense Industry Minister Dmitri Ustinov on the possibility to create a satellite that would be launchable aboard the new rocket. In November 1954, Moscow approved the creation of a modified R-7.

Soviet engineers produced three satellite designs simultaneously: one difficult, in the shape of a cone, with twelve scientific instruments onboard, a second that was able to hold a camera and a dog, and a third – the simplest, appropriately named the PS-1 ('PS' the Russian acronym for 'Prosteyshiy Sputnik' – 'Elementary Satellite'). Scientists waited in anticipation to find out which of their creations would be chosen.

Evgeniy Ryazanov, an engineer at the OKB-1 construction bureau, later would recall that Sergei Korolev had an inexplicable distaste for the PS-1 (which would come to be known in English as the Sputnik-1). Someone had asked the scientist why he didn't like the design. "Because it's not round!" was Korolev's reply.

In late 1956, it became obvious that the orbital laboratory equipment being created would not be ready in time. In January 1957, the Council of Ministers approved a program for flight testing of the R-7.

Korolev sent the government a note saying that testing of the modified, Sputnik-carrying rocket could be conducted in April or May of that year. In his note, the engineer reminded the country's leadership that the US planned to launch their own artificial Earth satellite. "We run the risk of losing the initiative. I propose that instead of the Object D, containing the complex laboratory, we launch into space the Prosteyshiy Sputnik [PS-1]," his note read.

© Sputnik / Alexander Mokletsov
The second Soviet Earth artificial satellite, which would be launched into orbit on November 3, 1957. (File)

In August 1957, after several failed launches, the R-7 was successfully tested. A month later, a second successful test was conducted. In September, testing of the PS-1 was also concluded.

Yuri Silaev, the engineer who helped put the world's first satellite together, recalled the ingenuity and simplicity that went into some of the tests. "We took a large pan, poured some spirit alcohol in, threw dry ice in; the temperature reached —60° Celsius. Then we put half the Sputnik in, while we 'fried' the other half with 20 incandescent lamps to +50° Celsius. Every 15-20 minutes we switched. The Sputnik's metal construction hissed and crackled, as if it was about to burst. Tests continued for two days straight, with a few breaks to test the operation of batteries and sensors. Almost simultaneously, testing was conducted on a vibration machine."

The PS-1 featured two beacons, giving off signals at 20 and 40 MHz, respectively. These were chosen to allow the signals to be picked up by amateur radio enthusiasts without any complex equipment.

Engineers weren't certain how long the signal would last, and whether it would be powerful enough for someone on Earth to even pick up. Six variants of transmitters were developed, and tested aboard planes and helicopters. Engineers later recalled that Korolev liked the final result so much that he would ask, half-jokingly: "And could you make it that [the transmitter] would squeak out a word?"

On September 22, a modified R-7 rocket arrived at the launch site. The rocket had been simplified dramatically, its weight reduced from 280 metric tons to 272 tons, the section for its warhead replaced by a specially designed container for the satellite, its radio control equipment and telemetry systems removed, and its automatic shutdown systems streamlined.

On October 2, Korolev approved flight testing for the PS-1, and sent a note to Moscow about readiness for the flight. The engineer did not receive a response, and made the independent decision to load the satellite into the rocket and ready it for launch.

On October 4, at 10:28 pm Moscow time, Sputnik-1 was launched into orbit. 20 seconds into the flight, the module separated from the rocket's second stage, and the satellite's transmitter was activated. Scientists heard its telegraph-like 'beep-beep' tones as it flew over the horizon. The Sputnik 1 orbited for three months, completing 1,440 orbits around the Earth, ending up flying approximately 60 million km. Its radio transmitters continued to work for two weeks after launch. On January 4, 1958, Sputnik-1 lost altitude and speed, entered the atmosphere and burned up. On January 31, 1958, the US launched its first artificial satellite, Explorer 1.

This was the dawn of the space age.