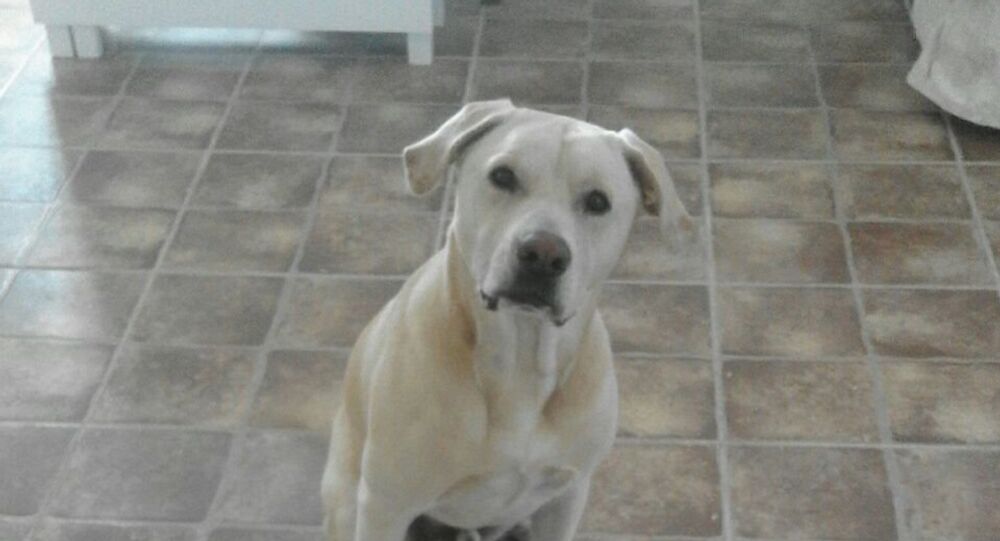 Man's Best Friend: Spanish Dog Has a Nose for Sniffing Out Lung Cancer

People have taken advantage of dogs' incredible sense of smell for centuries, using their noses for hunting, and searching out bombs or illegal substances. Now, a group of Spanish researchers have discovered that dogs are also extremely effective in sniffing out lung cancer.

Spanish researchers at the Hospital Clinic of Barcelona have made a surprising and pleasant discovery. Blat, a Labrador-pit bull mix, is able to detect the smell of substances specific to lung tumor cells on a person's breath with a very high degree of accuracy.

The results of Blat's work have been presented in the European Journal of Cardiac Surgery, published by Oxford University.

Sputnik Mundo contacted Dr. Laureano Molins, coauthor of the study, to find out how Blat the dog turned out to be an important assistant for medical practitioners.

"He was trained over three-four months to sniff out and identify the breath of [lung] cancer patients. After this, he was presented with breath samples of patients with and without cancer. In over 700 tests, he was able to correctly identify those with cancer with a 98% success rate," Dr. Molins explained.

The dog's talent may become an important new tool in the fight against lung cancer, which doctors know is one of the most aggressive forms of cancer when it comes to patient mortality. Today only about three in ten people who are diagnosed are given an operation. For the rest, surgical intervention is no longer possible, because the disease has been found too late, when it has already spread throughout the body and to other organs.

YouTube/Sputnik
Surf's Up! 70 'Pawticipants' Conquer Waves at Surfing Competition for Dogs
To detect tumors, doctors use various methods, such as computerized axial tomography. However, in such tests, numerous neoplasms are often found that are not necessarily malignant, such as pneumonia scarring or the results of living in an urban environment.

"We need tests that will show that the tumor is malignant," Dr. Molins stressed. "For this, there is the PET (Positron Emission Tomography) or the [lung] puncture test. But now a canine's sense of smell can help us, too," he added.

Blat's nose is trained to identify the volatile organic compounds present in patients' breathing. Each time a person exhales, over 3,000 such compounds are released. And while it remains unknown which of them specifically is associated with lung cancer, Blat is capable of detecting it. When he finds the smell he's looking for, he leans forward and points it out with his nose.

"Cancer has a smell. Everything has a smell. If you imagine a [cancerous] nodule in the lungs as a kind of bulge, a cluster of cells, it too has a peculiar smell," Ingrid Ramon, Blat's trainer, said.

© CC0 / ChristianeBrand
Animals Allowed! 750 Pets Make Work Days Brighter at US Game Developer Office (PHOTOS, VIDEOS)
According to Ramon, people cannot appreciate these smells because our sense of smell is too weak. "But even doctors say that a person smells differently when he or she reaches the terminal stage of cancer," she added.

Blat was trained to distinguish the smell of lung cancer in the traditional way, receiving a treat for making the correct guess. Thus, this smell acquired a special significance for him, allowing him to point it out whenever he comes across it.

According to Dr. Molins, the results of the 'Blat test' "have the same level of effectiveness as a puncture biopsy." Of course, biopsies are still the most proven technique, but occasionally the tumors are too small or located in less visible areas to be found in this way. It is in these cases that a canine's incredible sense of smell can help.

In the meantime, Blat continues his important work, receiving samples from patients and volunteers.