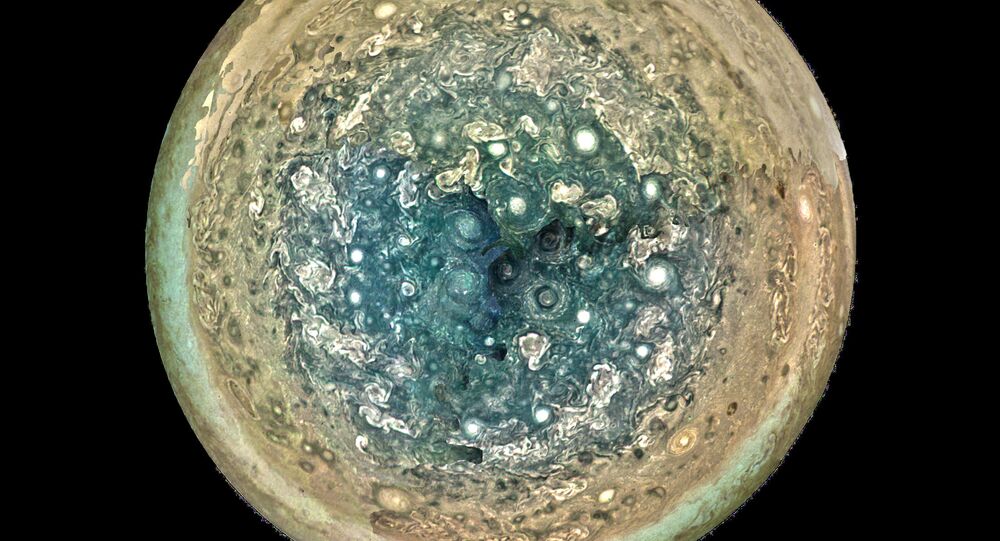 A quartet of photos were released by NASA that give a vivid look into the storms that rage eternally around the planet's south pole.

© NASA . JunoCam
This series of enhanced-color images shows Jupiter up close and personal, as NASA’s Juno spacecraft performed its eighth flyby of the gas giant planet. The images were obtained by JunoCam.

The $1.1 billion Juno, named for the wife of the ever-unfaithful Jupiter in Roman mythology, launched in August 2011 and arrived at Jupiter in July 2016. Equipped with a variety of instruments, such as a microwave radiometer to measure electromagnetic waves and a low energy ion detector called the Jovian Auroral Distributions Experiment, Juno is the second spacecraft to orbit Jupiter; the first, the Galileo orbiter was decommissioned in 2003. The photos were taken with the probe's JunoCam, a visible-light camera.

© NASA . Juno
This striking image of Jupiter was captured by NASA’s Juno spacecraft as it performed its eighth flyby of the gas giant planet.

Juno has provided mankind with a great deal of information about our solar system's largest planet. It has been tasked with a great variety of missions, but its main focuses have been to study Jupiter's atmosphere, core and gravitational and magnetic fields. Thus far, Juno has imaged Jupiter's poles for the first time and discovered phenomena such as cloud formations and auroras on the gas giant.

The spacecraft has a highly unusual and elliptical orbit to minimize its exposure to hazardous radiation. The probe swoops in as close to 2,600 miles from the planet and then ranges out as far as 5.03 million miles. It also transfers from Jupiter's north to south pole once every 53 days.

© NASA . NASA/SwRI/MSSS/Shawn Handran
The Hurricane Rachel Region of Interest of Jupiter, photographed by Juno's JunoCam during the Perijove 8 Flyby.

Juno's mission is intended to last until July 2018, at which point the satellite will be destroyed. However, similar probes — such as Cassini, NASA's recently decommissioned Saturn orbiter — greatly exceeded the length of their own mission time, and Juno has been going strong in the 14 months since it arrived.