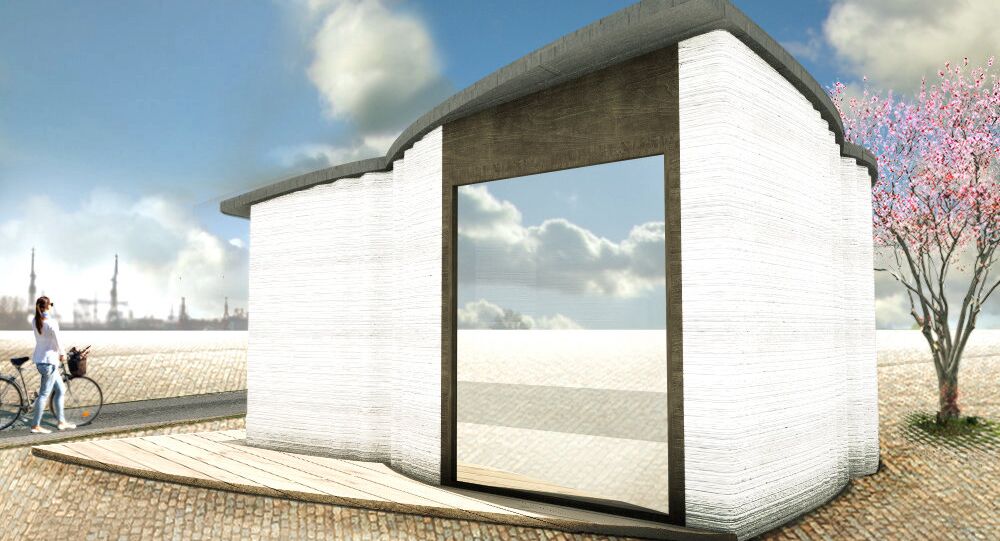 Whereas China pioneered the world's first 3D-printed building in 2015, Europe has yet to follow suit. Denmark is poised to fill in this so far vacant niche. After running into difficulties with the EU building codex, Denmark is now all set to become the industry leader in 3D construction.

Europe's first 3D-printed house is currently being constructed in the Nordhavn docklands district of Copenhagen. Although this first try, nicknamed The Bod (which is an acronym for Building on Demand) is but a modest 50 square-meter garden shed-sized office building, it is a display of the things to come.

"We hope The Bod will be an effective demonstration project that can inspire others to use 3D-print technology for buildings," Henrik Lund-Nielsen, the CEO of 3D Printhuset, which runs the project, told Danish Radio.

© AFP 2021 / Joshua LOTT
Puttin' On the Ritz: Danish Architects to Give Derelict Motown a Facelift
According to the Danish architects, there is a plethora of benefits associated with 3D buildings, which are being touted as the future of the construction industry owing to lower costs and speed of construction, durability and sustainability. However, there are also pitfalls which include the toxicity of materials.

According to Danish architect Martin Tamke, 3D construction of buildings is easy to get started with. Nevertheless, producing a consistent quality remains a challenge at the current stage. Therefore, Tamke noted, it is important to build more prototypes to gain experience and spread the knowledge.

The Bod's material is traditional concrete with the addition of recycled brick, which is said to improve the flow and require little plasticization. Subsequently, The Bod will be used as office space.

​There is one tiny snag about being the first project of its kind in Europe. In early 2017, a Russian company managed to 3D-print a building in just 24 hours. The 38 square-meter residential home was built in the town of Stupino, Moscow Region, which is technically Europe. Also, the Danish project is expected to take two months.

​Although hotels, offices and homes have already been printed around the world, the EU's tough ecological and building legislation has made it difficult to get started.

"Europe is undoubtedly the continent which attracts most researches companies involved in 3D-printing. But it has taken longer to actually incorporate the technology due to the standards and requirements to be met," 3D Printhuset technical manager Jakob Jørgensen told the Danish trade newspaper Ingeniøren.

© Photo : Hyperloop Technologies
Wet Dreams: Norway Fantasizes About Overseas Hyperloop to Denmark
Henrik Lund-Nielsen admitted that the company encountered considerable skepticism from the construction industry and had troubles achieving the building construction. Nevertheless, he remained optimistic, expressing hopes that The Bod will inspire others to continue and apply 3D print technology to buildings. His colleague Jørgensen praised 3D printing over traditional construction because it reportedly allowed complex forms at no additional cost, while also promoting up-cycling and waste reduction.

3D Printhuset began as a shop in Copenhagen in 2014, offering retail products and rapid prototyping services, before extending services to civil engineering and construction in 2016. In 2017, the firm organized a conference on 3D printed construction.