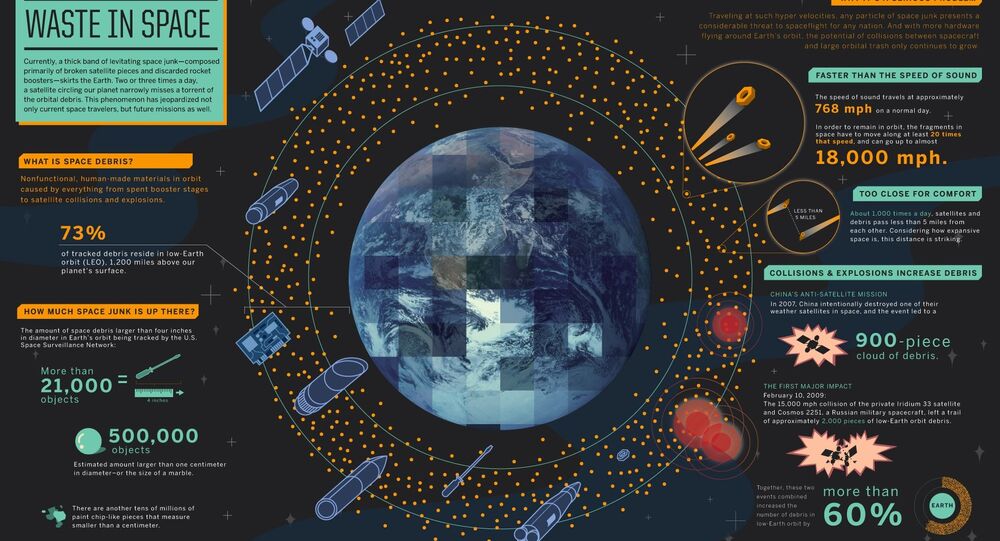 A new design gaining the interest of NASA could see the inexpensive and efficient removal of Earth’s orbiting space debris.

A proposed design for a space trash collector has received a second round of funding from NASA, and the technologies involved could benefit developments in miniaturization back on Earth.

A flat quadrilateral, a sort of magic carpet less than the thickness of a human hair and about three feet on a side, would incorporate redundant microelectronic and other digital technologies, as well as the propellant to allow the device to be moved around in orbit.

Upon arriving in close proximity to one of the estimated 520,000 of bits of detectable human-made space junk dangerously cluttering up near-Earth regions, the device, known as a ‘Brane craft,' would wrap itself around the orbiting offal and direct both objects to an uncontrolled descent into our planet's atmosphere, at which point the trash and the collector would be on track to be immolated by the intense heat and pressure of reentry.

The space-cleaning carpet, the brainchild of California-based Aerospace Corporation, itself would be subject to the same risks it is designed to ameliorate, so it will be built with multiple backups — crafted in such a way that a tiny particle shooting through it at extremely high velocities of up to 17,500 mph would not incapacitate the device.

NASA asserts that it tracks around 20,000 pieces of orbital trash larger than a softball — just under four inches — orbiting the Earth, and these objects travel fast enough to damage satellites and spacecraft, placing astronauts at risk.

And while there are known to be at least 500,000 pieces of orbiting garbage the size of a marble, or bigger, there are thought to be millions upon millions of tiny bits speeding around the planet that are small enough to avoid detection, but not small enough to stop a spacewalker from being hurt or killed.

The skinny space cleaner is designed to be stackable, for easy shipping aboard a launcher, and would be deployed in swarms that can be organized to work in concert or alone — each directed to specific coordinates that can be modified at will, according to space.com.

Preparing the tech for real-world testing will take several million dollars at a minimum, according to Aerospace's principal investigator and a senior scientist Siegfried Janson.

"We're looking at how we can get government or other companies interested in this to take this to the next level," Janson said, cited by space.com.

Company assertions claim that if enough of the Brane craft are deployed, almost every detectable piece of space trash weighing up to 2 pounds or less could be eliminated from orbit within a decade.