European scientists have inaugurated European XFEL, the world's most powerful x-ray laser, near Hamburg. Speaking to Radio Sputnik, Dr. Robert Feidenhan'l, European XFEL's managing director, explained some of the exciting new scientific opportunities opened by the laser, including the chance to see how plant life converts light into energy.

The European X-ray Free Electron Laser (European XFEL) project, involving 11 countries, including Russia, began operation on Friday. The €1.5 billion x-ray research laser facility will be used to study the structure of matter at the molecular level, and allow scientists to observe chemical reactions or biological processes as they unfold.

Scientists anticipate that the laser will lead to fundamental discoveries related to natural science, energy, medical treatments, the chemical industry, and the creation of new or improved materials. The massive, 3.5 km long laser has been likened to a giant microscope, accelerating electrons to incredible speeds and then producing very brief flashes in the x-ray range, illuminating matter and material processes down to the atomic level. 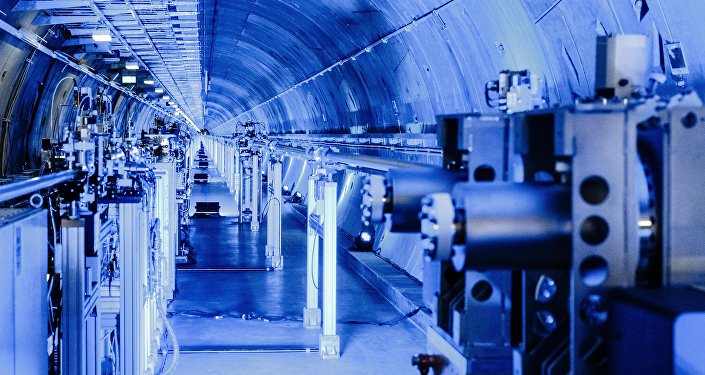 © AFP 2019 / Markus Scholz / dpa
SPUTNIK EXCLUSIVE: Have You Ever Seen the World's Most Powerful Laser? (PHOTOS)
Along with Germany, which allotted over 50% of the funding for the project, European XFEL involves Russia (which contributed more than a quarter of the budget), Denmark, France, Hungary, Italy, Poland, Slovakia, Spain, Sweden, and Switzerland.

Professor Robert Feidenhans'l, the project's managing director, sat down with Radio Sputnik to discuss just how the new laser works, and its exciting applications.

"First of all, it's different in that it's an X-ray laser," the scientist explained.

"The way it works is: in order to make X-rays, you first need electrons. You start by making electrons, which is done at the DESY campus. You then put electrons into an injector, and accelerate them up to a very high energy to basically run at the speed of light. Then you put these electrons in a so-called undulator, where they go through a zig-zag path, and then your emit x-rays. You throw the electrons away and use the x-rays which come long."

Feidenhans'l stressed that put simply, "the important thing is that with our facility, it's very, very, very powerful; there's a lot of x-rays coming out, and they come fast. It only takes a very short time for this x-ray pulse to come along, and then you can take pictures of molecules, viruses, proteins, so you can see how they actually look on the atomic level."

Commenting on the tremendous length of the laser and the reason for this, the scientist admitted that "yes, it's actually very big. It's about 3.5 km in total. It starts at Bahrenfeld, a special part of the city here in Hamburg; then you have a 2 km accelerator, where you accelerate the electrons. Then you have another 1.5 km where the x-rays go along."

As far as European XFEL's uses are concerned, Feidenhans'l explained that among other things, "it will be used to look at the structures of biomolecules, to see how they are built, how they work. In particular, our laser can be used to look at biomolecules at room temperature in a normal environment. Normally, you have to cool the bio-samples down to where it's an unnatural environment for them."

"More importantly," he said, "one can make 'movies'; one can see how photosynthesis works –when a biomolecule absorbs light and converts it to energy. Then we can follow the individual steps in a kind of molecular movie."

"When you have understood how a molecule actually makes energy out of light, you could eventually design an artificial machine which does the same thing. But you need to see the 'movie' in order to do that," Feidenhans'l added.

© NASA . CXC/CEA/T
ET on the Line? Mysterious Radio Signals From Distant Galaxy Stump Astronomers
Accordingly, the professor noted that one of the laser's tasks will be in energy research – studying how to improve the efficiency of energy use. "Photosynthesis is one of them, but there are many others. It can be used for batteries, catalysis, and other places where you can follow the fundamental chemical and physical processes in real time and see what actually happens."

European XFEL will also be used for medical research, Feidenhans'l said. "If you want to make new drugs, you want to see and understand how these drugs are working on a particular biomolecule, and that is also something we can actually measure and film, and then understand how the physical and chemical and biological processes actually run as a function of time."

Alongside their new x-ray laser, the professor noted that the team at European XFEL has also developed a high-powered optical laser, capable of heating material to extremely high temperatures and pressures, "similar to what you have in a star or an exoplanet." This will enable scientists to "see the material while it's at very high temperature, and high pressure. But it's not it's not the exabeam itself that heats it up; it's done by a powerful external optical laser."

SPUTNIK EXCLUSIVE: Have You Ever Seen the World's Most Powerful Laser? (PHOTOS)