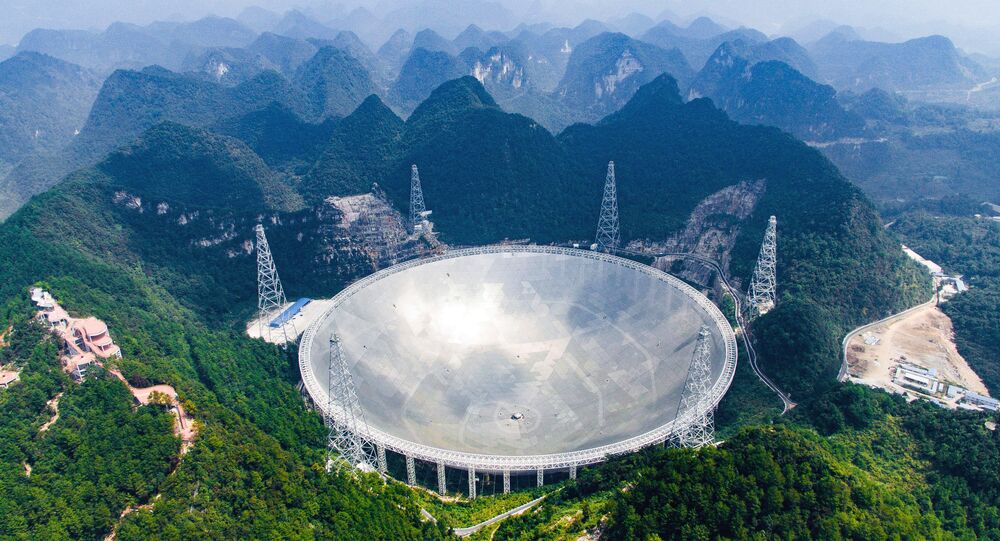 Large groups of noisy tourists at the site of China's Five Hundred-Meter Aperture Spherical Telescope (FAST) facility are disrupting scientists' work in the search for extraterrestrial life. In the past six months, the once-remote site has been visited by over 4 million tourists.

Located in the mountains of Guizhou province in southern China, the recently completed $178 million FAST facility, which has gained the record for being the largest radio telescope in the world, is capable of picking up signals from space that were previously undetectable. Scientists have characterized FAST as "a portal to new discoveries," and a major step in the search for alien life.

© CC0
Russia's New Soyuz-5 Carrier Rocket to Cheapen Satellite Insertion Into Orbit - Roscosmos
However, according to the South China Morning Post, all this is threatened by the inundation of literally millions of tourists coming to see the new telescope. In the past six months alone, over 4 million holiday-goers have visited the facility at its once-remote location in Pingtang county, Guizhou province. Experts are concerned that the heightened noise levels caused by the tourists may disrupt their work.

According to scientists, the noise created by the visitors, combined with the electromagnetic pollution emitted by their electronic devices, can negatively affect the accuracy of the data the telescope receives. In its search for interstellar signals for signs of extraterrestrial life, the telescope requires that the area around it is quiet, including a 5 km total radio blackout, including smartphones and digital cameras. This is impossible, however, so long as throngs of tourists flock to the area to get a glimpse of the structure.

© AP Photo / Liu Xu
In this photo released by China's Xinhua News Agency, the sun sets above the Five-hundred-meter Aperture Spherical Telescope (FAST) in Pingtang County in southwestern China's Guizhou Province Monday, June 27, 2016
© AP Photo / John Raoux, File
NASA, Lockheed Martin Power-Up Orion Spacecraft for First Time
Zhu Jin, director of the Beijing Planetarium, told SCMP that while the tourism was a good sign of the public's growing interest in science, the increased human activity in the once-isolated region inevitably increases electromagnetic pollution. "It can affect the telescope's observation," Zhu said. "There may not be an easy solution and may require compromise from both sides."

According to local authorities, the site could be visited by up to 10 million tourists this year, which is almost as much as those who visit the Great Wall of China on an annual basis. Scientists' concerns are complicated by the fact that the tourist attraction has become a major source of income for the county, providing it with 4.6 billion yuan (about $690 million US) in income. It is assumed that in the coming months, the construction of two expressways to the area from Guizhou's capital of Guiyang will only increase the tourist flow. Over 40 hotels and 100 restaurants have already sprung up in the area to serve the growing flow of tourists, with more under construction.

Last December, FAST scientists teamed up with Breakthrough Listen, a $100 million research program funded by Russian entrepreneur Yuri Milner to search for signals of intelligent life. Completed late last year, the FAST facility continues to undergo testing and calibration. A formal start date for observation has not been revealed.