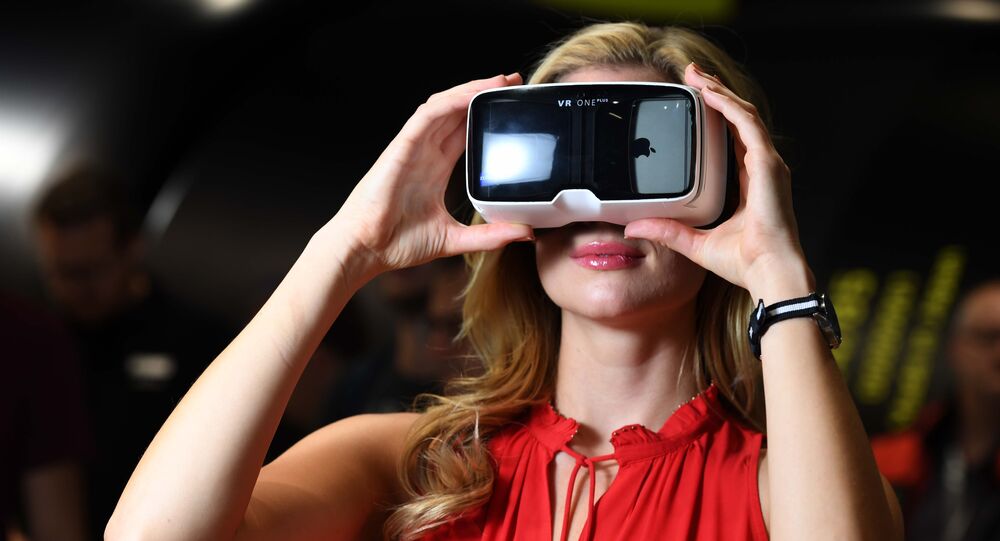 In boundless meadows covered with snow and on bumpy roads under steep cliffs, footprints of the Red Army soldiers were left along the Long March route. Wearing a pair of VR goggles, one student experienced the scene as though he was put in that harsh environment.

© REUTERS / Issei Kato
From Downward Dog to Mario: Chinese Schools Use Yoga, Cosplay to Relax Students
It is an ideological and political theory course opened by the Beijing Institute of Technology where students could use VR technology to "go through" the Long March that was undertaken by the Red Army more than 80 years ago.

"In the past we mostly learned about the Long March through textbooks and lectures, which usually left little impression. Now we can experience the Long March with VR glasses, which is very impressive," a student told the Xinhua News Agency.

In a course on the basic principles of Marxism, the students at Inner Mongolia Normal University used a rap titled "Marx was born after 1990s" to express what they feel about the philosopher.

"I first knew him/in the course of politics/I learned his thoughts/just to pass exams/…/ who is Marx/ actually he was born in 1990s/ he abhored sin/ he distained trickery," the song sings.

For college teachers, the ideological and political course about Marxism, Mao Zedong Thought and moral education is a hard nut to crack. Almost synonymous with dullness, for years, the class has been an ideal place for students to nap or play as long as one could bone up before the exam. The teachers were equally disinterested, and mostly repeated what was written in the books.

But the situation is changing. In December 2016, President Xi Jinping stressed the importance of strengthening political and ideological education at colleges during a national conference on the ideological and political work in colleges.

In many universities across China, the course is becoming popular among students, as more and more schools are making attempts to use innovative teaching methods for ideological and political theory course and make it appealing to the students. Meanwhile, many teachers have risen to fame and become Internet celebrities due to their daring efforts in enriching their classes.

"VR technology provides direct and vivid materials for the teaching of ideological and political theory and enriches the teaching methods. Students could experience what happened at that time in a virtual environment," said Li Linying, vice director of the College of Marxism at the Beijing Institute of Technology.

Starting in 2016, the Beijing Institute of Technology began to push forward the integration of ideological and political theory courses with new media technology and developed the digital course "Retaking the Long March" based on VR technology.

Nvidia
‘The Future Is Upon Us’: Tech Firms Look to Train Robots in Virtual Reality
By imitating the geographical environment, climate and so on of the Long March, the course created a virtual environment for the students to experience the encirclement and obstruction, the hardship of trudging through the snowy mountain, and the death and separation that the Red Army experienced decades ago, so that young people could understand the spirit of the Long March better.

In the Luoyang Institute of Science and Technology, an employment mentor named Xue Rong live broadcasts her classes on the Party and turns Party building theories into vivid stories, receiving praise from netizens.

"Learning about the Party is a serious matter. But if taught through the live broadcast platform and narrated in understandable language, it could be better received by the netizens," said Xue.

Sun Ling, who teaches Marxism and Leninism at Xing'an Vocational and Technical College in Inner Mongolia Autonomous Region, reflected on her teaching method after she encountered a cold reception from her students. Realizing that the class should be more connected to the students' work, Sun changed her teaching method.

"Our school trains technology talents. The students may be weak in expressing themselves in words but they are strong in their specialized technical work, so the course should be more connected with their profession," said Sun.

Now the students in Sun's class can finish the course writing papers and designing clothes or posters. The designs they hand in also surprise Sun. Some students designed T-shirts to publicize Mao Zedong Thought, some designed posters on the theme of Mao Zedong Thought, and some, who specialize in preschool education, talked about the development of China from the angle of a kindergarten building.

Shanghai Polytechnic University, which is crowned as the "cradle of model workmen," has designed a special course named "Workmen in China" this year to carry forward the spirit of model workers, while also helping students understand the demand for talent in the society.

The university invited seven master workmen to share their experience with students. They told students that becoming a technically qualified workman is not only a demand from the country but also the need of the hour. Now the class has attracted nearly 11,000 students.

Keeping up with the times

"Do you believe in Communism? You may have different answers to the question. But if I ask, do you want to make a fortune, your answers may be unprecedentedly similar," Wang Xiangming, a professor at the School of Marxism Studies of the Renmin University of China, said in his class.

A large number of students praise Wang's teaching. To many students, Wang's class has become the most sought-after because he does not avoid students' questions about the theory, he can answer questions with empirical examples, and he never preaches.

To keep the course up-to-date, Wang has been finding teaching materials related to daily life. In Wang's class, he analyzes the plot of anti-corruption TV series In the Name of the People, and also encourages students to recite Chairman Mao's poems.

© REUTERS / Lucas Jackson
Will Mobile VR Experiences Fizzle or Take Off in China?
But questions and even harsh criticism are unavoidable. According to Xue, the Internet celebrity, since the quality of the audience varies, some would make negative comments or even utter verbal abuses.

"But in my studio, the biggest characteristic is cleanliness. Many Red stories stimulate gratitude and love among the netizens," said Xue.

She explained that she teaches in a way that is preferred by young people, instead of preaching.

In this round of innovation on the ideological and political theory course, many teachers have turned into Internet celebrities after the breakthroughs they made in classes. In Shanghai, the students selected four female teachers as "Four Si Zheng (ideological and political class) Goddesses" because they transformed the previously boring courses into something interesting.

Feng Wuzhong, an associate professor from Tsinghua University, even became famous beyond China after his class about Mao Zedong Thought was put on MOOC. About 5,000 people from 130 countries and regions have chosen the class.

Besides the teachers' efforts, students are also using club activities to strengthen the ideological and political education. For instance, in Inner Mongolia University, the most popular societies are two focusing on the theory of building socialism with Chinese characteristics and the Party's history.

The ideological and political theory course, which is a compulsory course in Chinese colleges, was first set up in 1984 and has been playing a significant role in carrying out ideological and moral education among college students.

The current ideological and political theory course in colleges mainly include Mao Zedong Thought, Deng Xiaoping Theory, fundamentals of law, basic principles of Marxism, and the theory of building socialism with Chinese characteristics.

© Flickr / Rafael Valentim
US Military Planning to Use Virtual Reality Tech on Battlefield
The course has played an important role in guiding students' view about the world, life and values. It is considered to be of great importance today amid the spread of complex and varied values and ideologies in the time of the Internet, where young people who lack a sense of judgment can easily get lost.

On the other hand, as experts point out, the teaching content and methods have much room for improvement to attract young people.

The education ministry has made 2017 a year of "improving the teaching quality of the ideological and political course in colleges" to enhance the quality of the course.

According to the education ministry's plan revealed in May, textbook amendment, platform building and the evaluation system for teachers specializing in this course are being explored as steps in that direction, to encourage teachers to innovate and devote more energy in their teaching.

This article was written by Xu Ming and was first published in the Global Times.

Will Mobile VR Experiences Fizzle or Take Off in China?