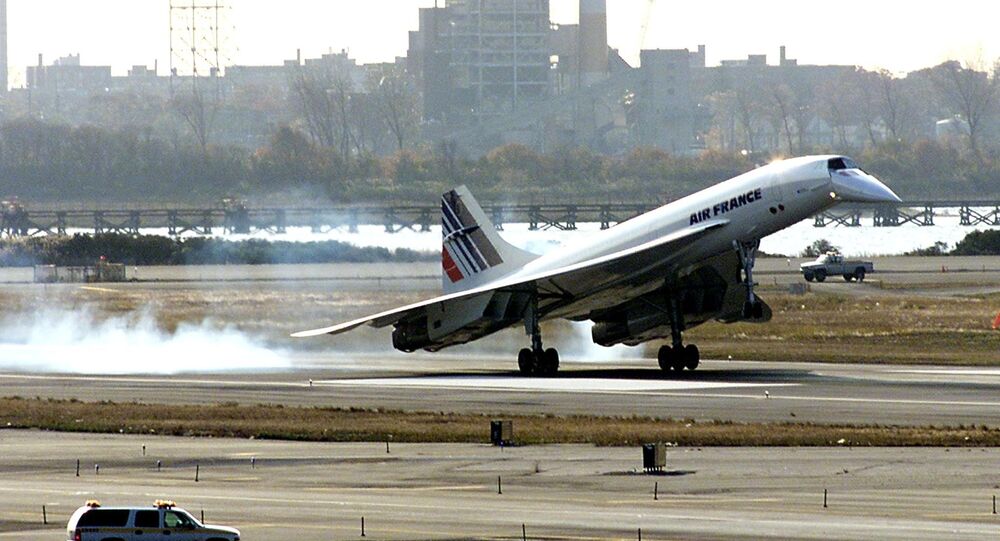 Supersonic aircraft such as the Tupolev TU-144 and Concorde have not graced the skies for decades, but that may be about to change as designers in Russia and the US are developing new models.

The world's last supersonic passenger flight took place on October 24, 2003, when a British Airways Concorde jet flew from New York to London in just three and a half hours.

Concorde was a joint invention of the British Aircraft Corporation (now BAE Systems) and France's Sud Aviation (now Airbus), which built 20 of the airplanes. For almost four decades, British Airways and Air France took high-paying passengers across the world at a top speed of 2,180 kph.

However, the air companies permanently grounded the planes in 2003. Concorde had been considered one of the world's safest aircraft until a disastrous takeoff in Paris on July 25, 2000, when an Air France Concorde crashed and killed 113 people.

© Sputnik / Maksim Blinov
Three Years Since MH17 Crash: What is Stopping the Truth From Coming to Light
The accident shook passenger confidence in the airplane and along with rising fuel and maintenance costs contributed to the end of supersonic passenger flight.

The first supersonic plane to take to the sky was the Tupulev TU-144, which had a top speed of 2,430 kph and made its first flight in 1968. However, its commercial life lasted just eight months, until a TU-144 crashed at an air show in Paris in June 1973, killing 14 people.

The TU-144 suffered from two main problems, according to RIA Novosti correspondent Konstantin Bogdanov. The first was related to the plane's construction, and the second to a lack of infrastructure and airfields where the plane could land safely.

"The TU-144 was a very interesting but crude machine. The wing design was made from large panels, which instantly led to stress problems because of imperfections and also allowed cracks to spread over long distances. It also turned out that the level of stress during a flight exceeded that of the design plans."

"The NK-144A engines were a huge problem, they couldn't get the technology right and they just burned out. Then there turned out to be a problem with the energy efficiency of the engine, that the specified range of 4,000-4,500 kilometers was not realistic with a maximum load of 15 tons, as on commercial flights – the limit was 3,000 kilometers  (the 13-ton Concorde could manage more than 6,200 kilometers)."

© AP Photo / Sergei Karpukhin
The TU-144, dubbed the Concordsky, hurtles skywards after 20 years in mothballs Friday Nov. 29, 1996 from a Zhukovsky airfield, some 30 kms. south of Moscow
"The length of the basic route from Moscow to Almaty was 3,260 kilometers, at the limits of the machine's capability if the plane was full of passengers. The RD-36-51A engine was tested on the TU-144 and it was thought that this could solve the problem of the flight range, but this project was never completed. There was almost nowhere to land the plane in the USSR, the lack of alternative airfields was a big problem," Bogdanov wrote.

"In summary, we can say that two weaknesses killed the TU-144: strain on the construction and technological flaws on the one hand, and underdeveloped infrastructure of bases on the other."

"Any one of these problems could have been solved with enough will. There have been more monstrous machines brought to an acceptable level and even Russia's traditional problem (infrastructure) can be solved with perseverance: in the end, the airport network was rebuilt for the first turbojet airliner, the Tu-104, despite a lot of problems at the early stage."

"However, a combination of two such complications in the absence of clear support for supersonic civil aviation from the right ministries and the Central Committee grounded the TU-144 for good," Bogdanov wrote.

Despite these setbacks, recently some aircraft engineers have started redeveloping supersonic aircraft in the hope that consumer demand may return.

One of the main attractions at last week's MAKS-2017 airshow was an advanced prototype model of a hydrogen-powered hypersonic passenger plane, produced by the Russian Zhukovsky Central Aerohydrodynamic Institute (TsAGI).

Aircraft engineers in the US are also working on a new hypersonic plane. Aerospace manufacturer Lockheed Martin is developing a hypersonic unmanned reconnaissance plane, the SR-72, which would be a successor to the supersonic SR-71 Blackbird.

On Monday, NASA announced plans to construct a demo super-quiet supersonic aircraft that would reduce sonic boom to a level of 60 to 65 A-weighted decibels (dBa), far less than the 90 dBa of the Concorde and more akin to the hum of a luxury car engine.

"Today, making supersonic business jets is no problem, the technology exists. I don't exclude the possibility that supersonic airliners will reappear, but it would have to be a very big buyer with a lot of money. A supersonic jet definitely isn't needed on the mass market, it's an absolutely unprofitable project," aviation expert Sergei Krutousov told RT Russian.

However, the director of the Center of Strategic Development in Civil Aviation Anton Koren disagrees. He pointed out that the Concorde flew more than 3 million people across the world before its demise, which demonstrates "the validity of supersonic aircraft as a commercial project."

"In the near future, we can expect the resumption of projects for the development of new supersonic passenger planes with a small capacity, orientated toward private or corporate charter flights," Koren declared.