On July 16, Apollo 11 blasted off from the Kennedy Space Center in Cape Canaveral, Florida. Its voyage would culminate four days later as inarguably one of the greatest technological achievements of all time – humans setting foot on another celestial body.

Following a champion's breakfast of steak, eggs, toast and coffee, at 6:45am Eastern Daylight Time, Commander Neil Armstrong, Command Module Pilot Mike Collins and Lunar Module Pilot Buzz Aldrin took their seats in the Saturn V rocket, the vessel scheduled catapult the intrepid explorers quite literally where no man had gone before.

​On board, along with computers equipped with processing power comparable to those of a basic mobile phone, a communion wafer and the American flag, were medallions honoring Russian cosmonauts Yuri Gagarin, the first man in space, and Vladimir Komarov.

It would not be until 9:32 am before the Saturn took off from Launch Pad 39A, watched from the ground by an audience totalling possibly over a million, including half the members of Congress. They were seated three and a half miles from the site — Saturn rockets were packed with enough fuel to throw 100-pound shrapnel three miles, and NASA couldn't rule out the possibility they might explode on takeoff.

Despite this concern for the fate of VIP observers in the event of an accident, the agency's anxieties didn't apparently extend to the astronauts themselves. In the lead up to the launch, NASA refused to offer the men life insurance policies — particularly callous one might think, given the crew of Apollo 1 (the US' first attempt to land astronauts on the moon) were killed by a cabin fire during a mere launch rehearsal test in 1967. 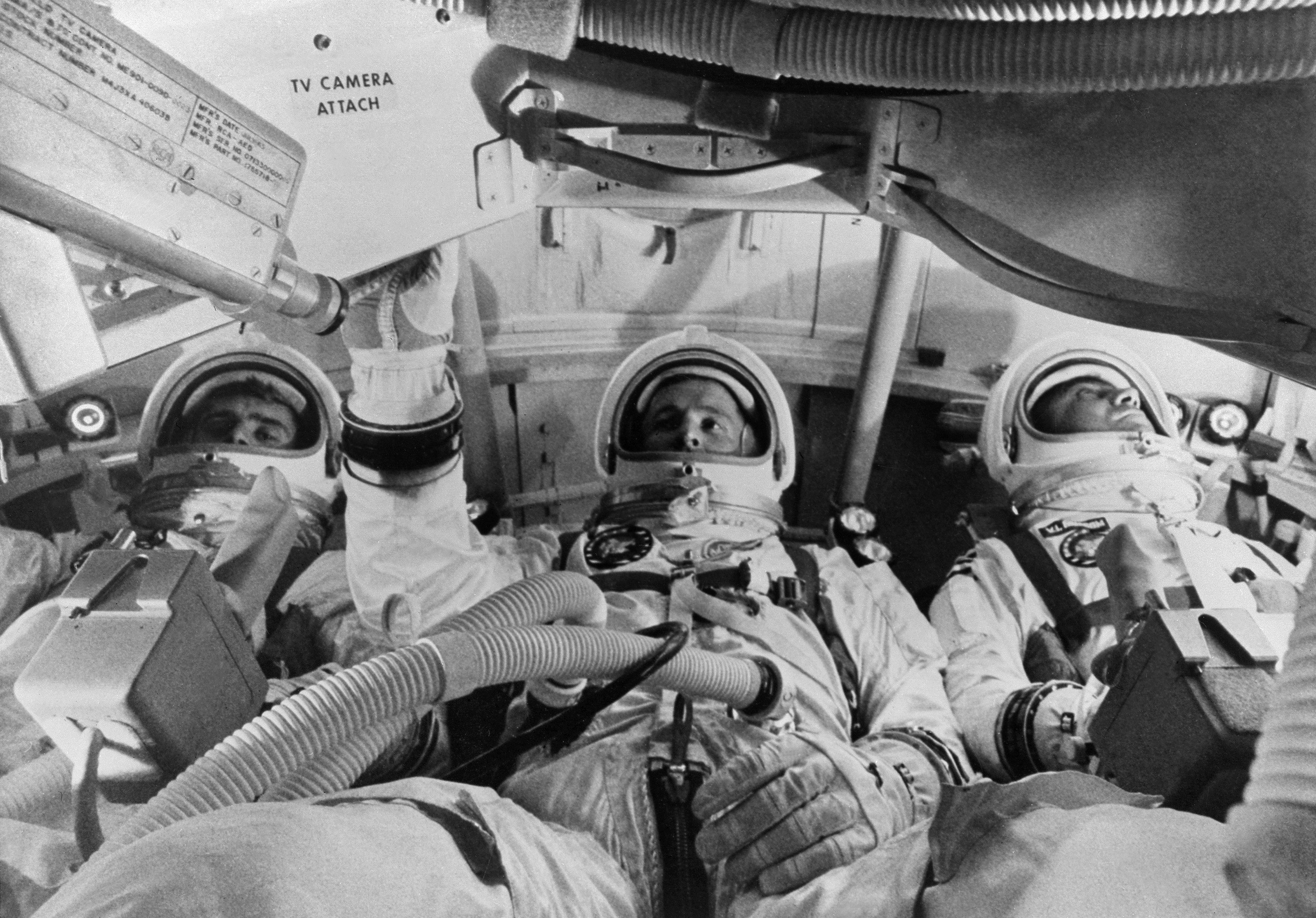 © AFP 2019 / NASA
Picture dated 1967 of astronauts Roger B. Chaffee (L), Edward H. White II (C) and Virgil I. Grissom (R), in the Apollo 1 command module, during a training exercice, at launch complex 34 at the Kennedy Space Center, in Cap Canaveral, Florida. All three astronauts died when the Apollo command module was destroyed by fire during a training exercise, 27 January 1967. It was the first major tragedy of the US space program.

Armstrong and his cohorts couldn't afford life insurance out of their own pockets, so they hit upon an ingenious scheme — the trio signed hundred of autographs and sent them to a friend of Armstrong's. If anything untoward happened to the astronauts during the mission, the individual would send the autographed memorabilia to each of the astronauts' families to sell, thus ensuring they could live comfortably.

In the event, the ship's launch was almost flawless — while the ship was blighted by a bad signal light and a leaky valve, the two issues were minor and quickly corrected. A mere 12 minutes later, the ship safely entered an elliptical Earth orbit.

After a quick check of their command module, Columbia, the crew fired their third-stage Saturn V engine again, placing their rocket on a direct course to the moon, at a speed of 38,946 kilometers per hour.

The rest of the day's journey proceeded similarly smoothly — while NASA had foreseen the potential need to correct course by re-firing the Saturn's mighty engines, in the event it proved unnecessary. In fact, the first phase of the trip proved so peaceful the crew opted to go to bed two hours early, 8:52 pm. As the trio slept, their spacecraft cannoned forward to their final, famous destination — the moon's Sea of Tranquility. 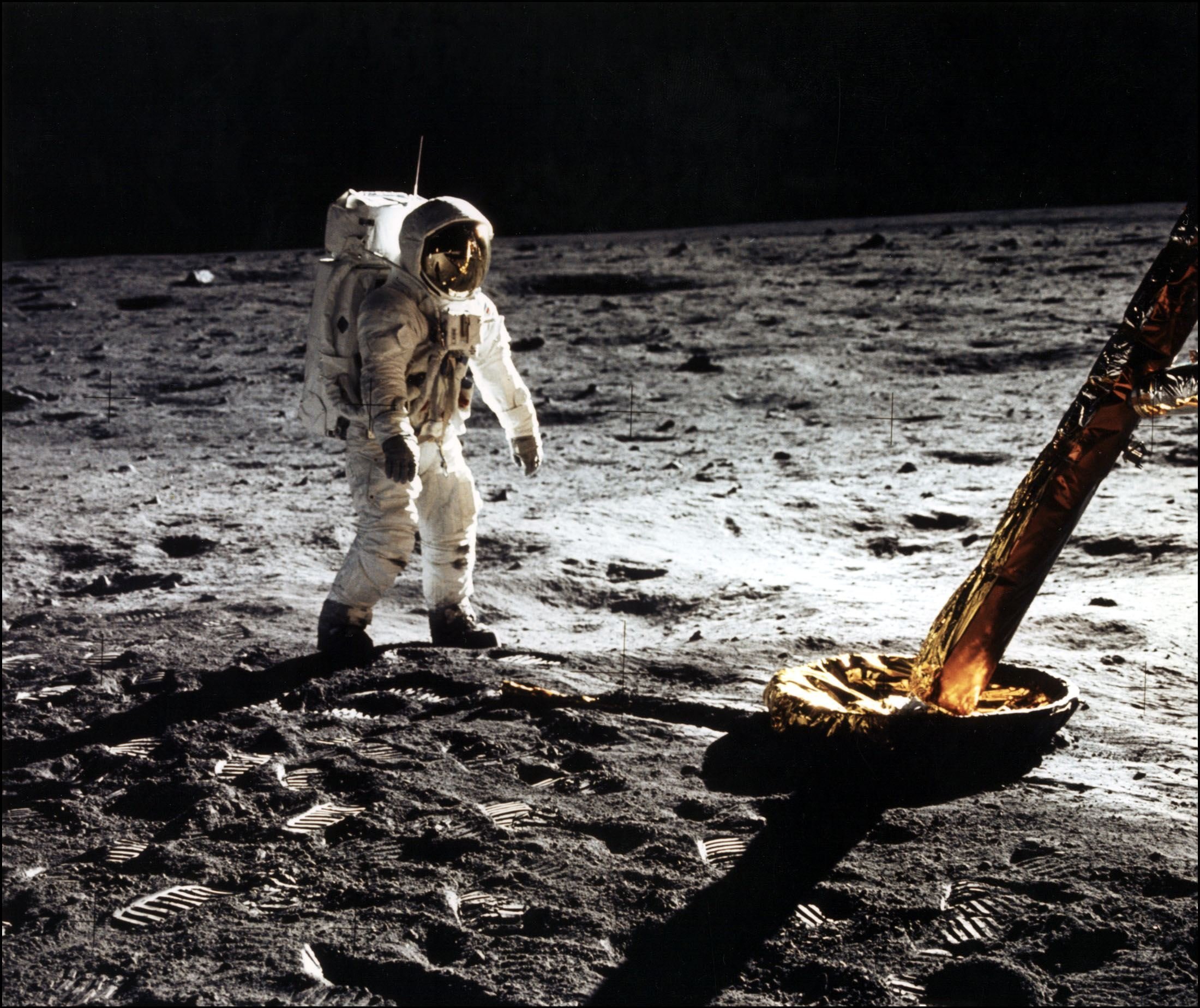 © AFP 2019 / NASA
This photo taken 20 July 1969 of astronaut Edwin "Buzz" E. Aldrin Jr., lunar module pilot walking on the surface of the moon near the leg of the Lunar Module (ML) "Eagle" during the Apollo 11 extravehicular activity (EVA). Astronaut Neil A. Armstrong took this photograph with a 70mm lunar surface camera.

The launch would eventually prove the catalyst for the end of the "space race" — an almost friendly competition between the Cold War's two superpowers, the US and Soviet Union, to reach the moon first. However, the US' victory on this front in 1969 did not halt Soviet space exploration —the USSR landed the first robotically-controlled rover in space, Lunokhod 1 ("moonwalker" in Russian) on the moon November 10, 1970.

It roamed for 322 days, analyzing soil samples and transmitting photographs back to Earth. Even more stunningly, on May 19, 1971, Mars 2 was launched, the second of seven unmanned spacecraft dispatched to the planet, and the first man-made object to reach Mars' surface. 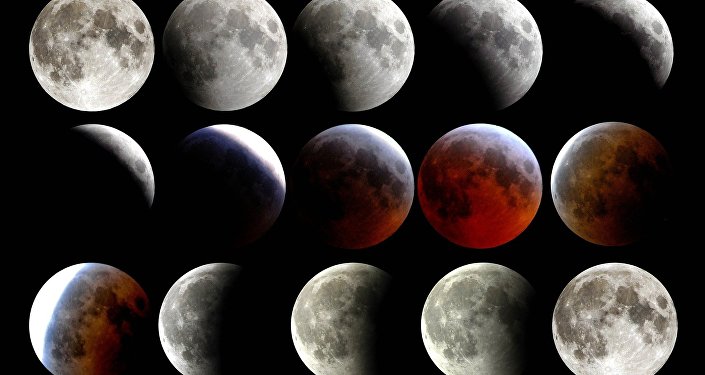 Luna-24, which went to the moon in 1976 to collect soil samples, marked the last Soviet mission to the moon. Its successor states haven't been back since, and the US has likewise seemingly lost interest in visiting. However, this may well change in the near future.

In 2014, Roscomos, the Russian Federation's space agency, outlined ambitious plans to restart the Luna program, starting with Luna 25. It intends to launch three lunar spacecraft — two to the moon's surface and one into orbit — before 2020.

The country's renewed interest in the moon came after a Russian instrument hitched a ride with NASA's Lunar Reconnaissance Orbiter in 2009 — the neutron detector identified pockets of water ice beneath the lunar surface.

© Photo : NASA Goddard/Arizona State University
This image of the Apollo 11 landing site captured from just 24 km (15 miles) above the surface provides the Lunar Reconnaissance Orbiter's (LRO's) best look yet at humanity's first venture to another world.

After all, if cosmonauts are put on the moon now, they have access to a potential source of water. Roscomos is crafting a drill which would penetrate a meter into the moon to take samples.

With private firms such as SpaceX determined to offer consumer space travel, and China looking to the skies, it could well be the world has entered space race 2.0.

What Have Apollo Astronauts Been Hiding for Decades?