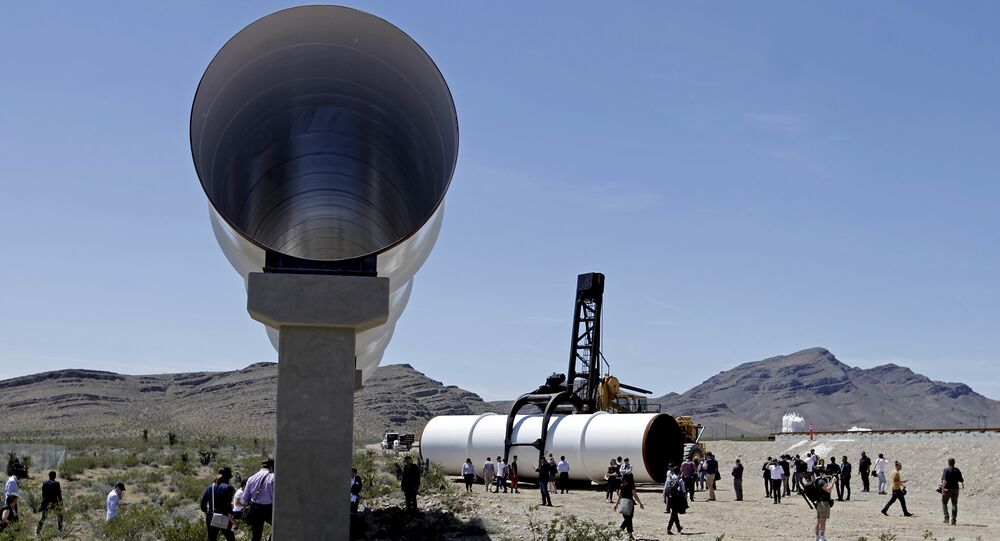 Hyperloop One, an American start-up with the mission of building a super-fast hyperloop train that theoretically would be able to move at 750 mph, has announced the first-ever successful run of their vacuum-sealed train at their Nevada testing facility.

The sled used in the test only hit 70 MPH, less than 10 percent of the hyperloop's intended goal of 750. The test took place at DevLoop, Hyperloop One's 105,000 square foot testing area in northern Las Vegas. The testing facility was opened in June 2017, and includes a Hyperloop test track 11 feet wide and 1,640 feet long.

The test pod, made from aluminum and carbon fiber, zipped down the tube by means of electromagnetic propulsion.

"Hyperloop One has accomplished what no one has done before by successfully testing the first full scale Hyperloop system," said co-founder Shervin Pishevar in a statement. "By achieving full vacuum, we essentially invented our own sky in a tube, as if you're flying at 200,000 feet in the air."

Pishevar added that the test was the "Kitty Hawk moment" for hyperloop technology, paralleling it to the Wright Brothers' successful test of the first heavier-than-air powered aircraft in Kitty Hawk, North Carolina, in 1903.

Hyperloop One said that their next goal is to get their aluminum-and-carbon-fiber pods to hit 250 mph.

Here's how it's supposed to work. A hyperloop vehicle looks pretty similar to a regular train, except it doesn't have any wheels. It also doesn't move along a track. Instead, the car moves as a pod through a pressurized, vacuum-sealed tube called a hypertube. Without the friction of the track to slow it down, the capsule could in theory move at speeds close to Mach 1. That's three times as fast as the most advanced commercial trains operating in the world today.

A hyperloop could make its way from New York City to Los Angeles in less than four hours in weather-free, crash-proof, power-efficient travel, all "at the price of a bus ticket" as Hyperloop Chief Engineer Josh Giegel told Engadget in November 2016. The technology is still in the exploratory phase but Hyperloop One seeks to be the first to elevate it to commercial viability.

Numerous cities, states and organizations have expressed interest in high-tech hyperloop technology. The United Arab Emirates might be chief among them, as it would take less than 10 minutes to get from Dubai to Abu Dhabi with a fully operational hyperloop.

The Czech Republic and Slovakia have inked "exploratory agreements" with Hyperloop Transportation Technologies, one of Hyperloop One's main competitors. Numerous other countries, including Finland, India, the Netherlands, Norway, Sweden, Switzerland, Russia, South Korea, the United Kingdom and the United States have also expressed interest in the technology.

Hyperloop One Wows Delhi With Speed & 'Make in India' Component