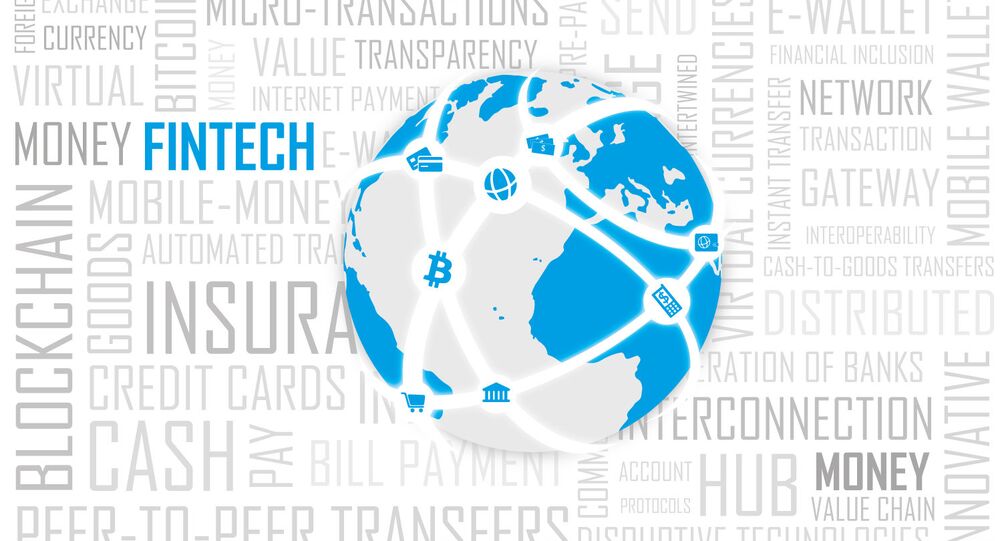 Blockchain technology is "challenging the status quo" and has the potential to transform the financial system by getting rid of many financial services providers who act as intermediaries, William Mougayar, author of The Business Blockchain, told Radio Sputnik.

Financial services companies are exploring the possibility of carrying out faster transactions in cryptocurrencies, and a consortium of seven large European banks has turned to US tech company IBM to create a new trade finance platform based on blockchain technology.

Blockchain is the technology behind Bitcoin and other cryptocurrencies, an open-source network that serves as a digital ledger to facilitate secure online transactions, removing the need for an intermediary.

The banks' new platform is designed to simplify and facilitate domestic and cross-border trade for small and medium sized enterprises in Europe, while helping to increase overall trade transaction transparency, IBM stated on Monday.

William Mougayar, author of The Business Blockchain, founder of the Token Summit and an early stage investor in blockchain startups, told Radio Sputnik that in its current form, blockchain technology can benefit banks and their clients. However, in the longer term, blockchain has the potential to disrupt the financial market.

"Blockchain can streamline the process of setting up letters of credit and facilitating the different steps in the supply chain process. I believe this was orientated toward the small-to-medium [sized] businesses, which are very cost-sensitive. In this particular case, saving costs and streamlining are the main advantages. The supply chain is one of the segments that the blockchain will impact over the next few years," Mougayar said.

© CC0 / Namecoin / Cryptocurrency Art Gallery
Game-Changer: Blockchain Technology 'Is Where the Internet Was in 1992'
"For sure, blockchain is the next generation of the internet, or the next generation of the web, from a technology perspective. However, in terms of how it will transform financial institutions, I think it will do that to a degree that doesn't go beyond their existing business model."

Eventually, blockchain is likely to disrupt the current form of financial services, because it has the potential to remove the need for intermediaries altogether.

In the short term, the growth in blockchain technology will create more jobs, but in the long term it has the potential to remove some jobs traditionally done by banks and their staff.

"First, there will more jobs created to implement blockchain technology, because we're still in the early days. So today, there are maybe 35-40,000 developers worldwide that know how to program a blockchain application or that know the blockchain technologies. So, that's not a big number but that number is going to grow. We're not going to see the blockchain removing jobs yet until these projects are fully implemented, so that will be a secondary effect that will come much later in the evolution of the blockchain, at one to three years down the line and perhaps even longer."

© REUTERS / Benoit Tessier/File Photo
'Digital Gold': Cryptocurrencies Soar as Investors Swap Dollars for Bitcoins
"Blockchain is a new technology that is really facilitating the transfer of digital money or of digital value between two parties, without having anybody in the middle. So that really is going to impact and affect almost all of us, because traditionally we have all been used to dealing with the banks as the key financial intermediaries for us. But they are intermediaries, they are not really doing more than facilitating transactions between us and others."

"The blockchain technology challenges that particular status quo and is the technology that allows any individuals or any businesses to conduct the same types of transactions with the same level of confidence, quality and fidelity between those two parties, without having somebody in the middle. So, it's going to disrupt any intermediaries that are in the middle of transactions."

Russia's Central Bank Rules Out National Cryptocurrency in Near Future