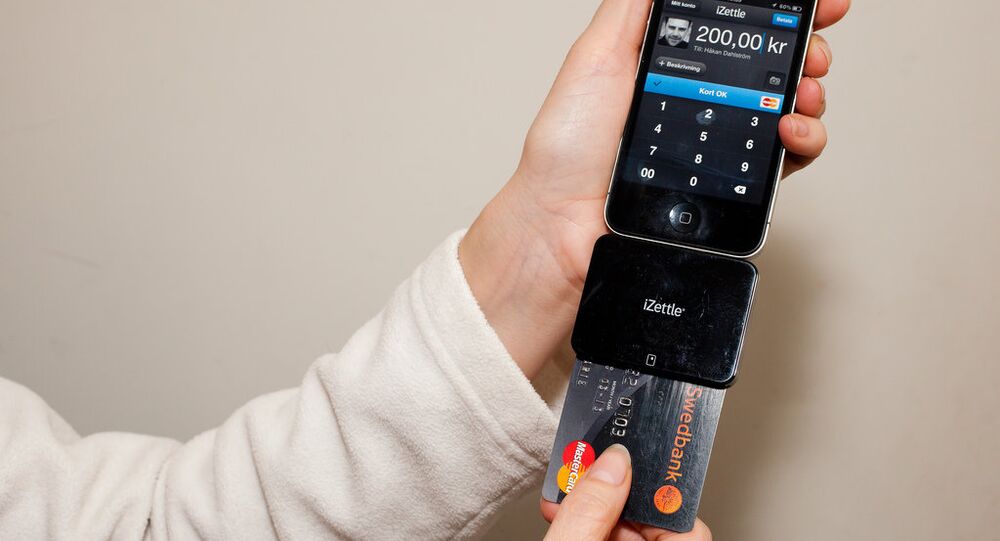 Challenges Arise as Sweden is Heading Towards Cashless Society

Together with its Nordic peers, Sweden has long been a leading nation when it comes to cashless transactions. While the idea of abandoning cash altogether still seems a faraway possibility, new opportunities and challenges arise as the cashless future is slowly becoming an everyday reality.

© AFP 2021 / TT NEWS AGENCY / PONTUS LUNDAHL
Pensioners Bicker as Sweden is Set to Become World's First Cashless Society
Last year, there were 65 billion SEK ($7.6bln) worth of banknotes and coins in circulation in Sweden. Between 2007 and 2015, however, their use decreased by almost 15 percent. Today, only one in five purchases in Swedish stores is still made in cash, according to statistics from the Riksbank.

Additionally, 95 percent of Sweden's population has access to bank cards. In 2014, the average Swede paid 270 times with a credit card, compared with an EU average of 93.

"It is possible that Sweden will stop using cash altogether. What matters is how good consumers think the alternatives are. When everyone thinks the options are better, then we will have stopped using cash," Christina Wejshammar of the Riksbank told the Swedish daily Dagens Nyheter.

So far, the main prerequisites for a national switch to electronic payments are a general technology-friendly attitude towards the population, expensive distribution costs for cash management and a plethora of electronic options. According to Wejshammar, the Nordics' trust of public institutions and banks may prove crucial.

© AFP 2021 / JONATHAN NACKSTRAND
Krona Goes Digital: Sweden Poised to Launch First Electronic Currency
The main selling point of electronic payments is cost-effectiveness. While a cashless society clearly has other benefits, such as increased transparency, which may prove pivotal in cracking down on tax avoidance or fraud, it also poses extra difficulties.

At present, electronic systems remain susceptible to hacker attacks or force majeure, with a natural calamity potentially creating considerable problems. Furthermore, there's a risk that some people will be left on the margins.

"The transition must be slow enough. Everyone may not have access to banking services. For some, it may prove hard to remember PIN codes or hit small buttons. We believe it is important that banks help customers who prefer cash to find other forms of payment," Wejshammar continued.

However, the increased transparency and control are not necessarily a blessing, as the comprehensive tracing of people's activity through their payment history may prove damaging to one's privacy.

"You'll be able see where the person drank coffee in the morning and where the train ticket was bought. Based on that information, you can compile a personal profile, which is potentially a major danger to personal integrity," Michael Halling, a professor at the Stockholm School of Economics, told Dagens Nyheter.

Another problem to tackle is the rise of alternative or cryptocurrencies such as Bitcoin, which make transactions next to untraceable. Their phenomenon alone indicates a public need for a currency that is neither controlled by the state nor the central bank.

According to prosecutor Catharina Linné of the Swedish Economic Crime Authority, financial crime will become complicated as it gets progressively harder to get cash.

Setback for Swedish Entrepreneur Trying to Cash In on 'Covfefe'