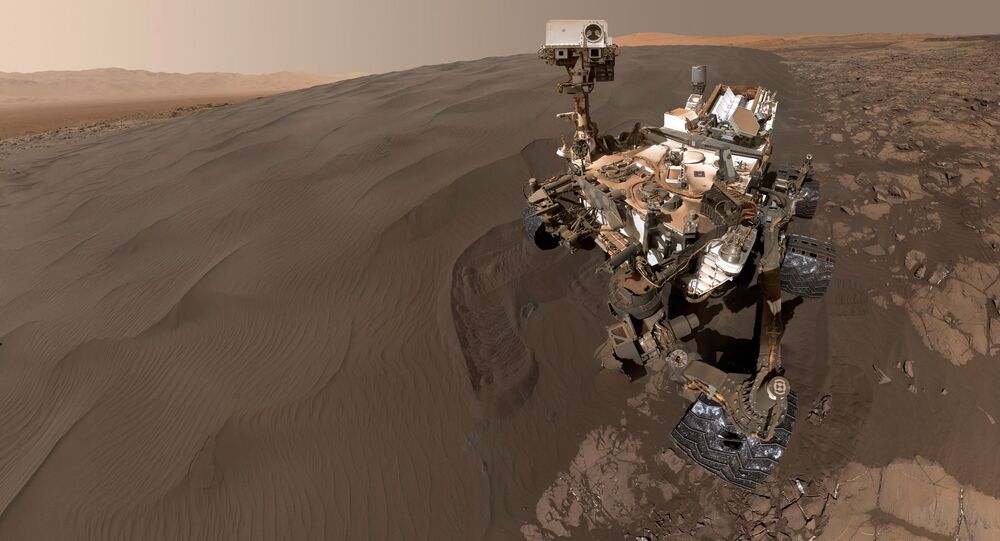 NASA’s Mars Reconnaissance Orbiter (MRO) managed to snap an image of the Curiosity rover as the vehicle continues to explore the desolate landscapes of the red planet.

The spacecraft’s High Resolution Imaging Science Experiment (HiRISE) caught Curiosity in its sights as the rover was climbing the lower slopes of Mount Sharp, also known as Aeolis Mons, after exploring the active sand dunes lower on the mountain.

© NASA . JPL-Caltech/Univ. of Arizona
The feature that appears bright blue at the center of this scene is NASA's Curiosity Mars rover amid tan rocks and dark sand on Mount Sharp, as viewed by the HiRISE camera on NASA's Mars Reconnaissance Orbiter on June 5, 2017

The image was snapped on June 5 when Curiosity was en route to investigate the outcrops of hematite at the Vera Rubin Ridge, according to the official website of NASA Jet Propulsion Lab.

The rover itself appears in this image "as a blue dab against a background of tan rocks and dark sand".

The rover has been taking pictures and gathering data since it landed near Mount Sharp nearly five years ago, in August 2012.

It should be noted that the MRO obtains images of Curiosity doing its work at least a few times every year since the rover was deployed.