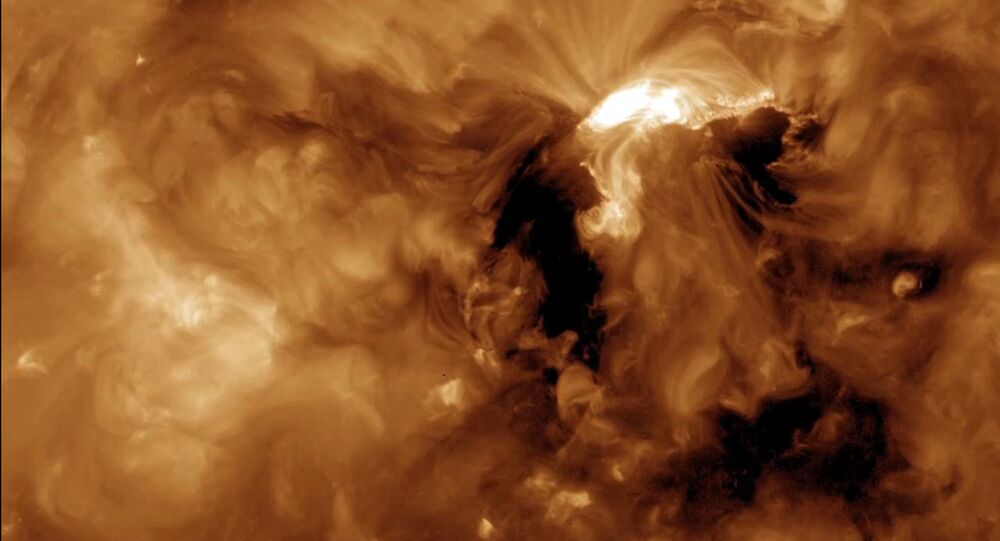 NASA’s Solar Dynamics Observatory has made an unexpected set of high-resolution photos of a partial solar eclipse, as the moon passed between the sun and the spacecraft.

© NASA . Goddard Space Flight Center
‘Ring of Fire’ - First Solar Eclipse of 2017 Visible on Sunday
NASA's Solar Dynamics Observatory (SDO) is a research spacecraft made with the specific purpose of measuring space weather, in order to predict conditions that could disrupt human space operations. But every now and then this strictly utilitarian spacecraft captures something interesting. This time, it managed to make several high-resolution photos of moon passing before the sun.

The lunar transit lasted almost an hour, between 2:24 and 3:17 p.m. EDT, with the moon covering about 89 percent of the sun at the peak of its journey across the star's face, according to the NASA report.

"While the moon's edge appears smooth in these images, it's actually quite uneven. The surface of the moon is rugged, sprinkled with craters, valleys and mountains. Peer closely at the image, and you may notice the subtle, bumpy outline of these topographical features," the report reads.

It is really a bit strange to see a perfect black circle without any kind of corona or some other dissipation effect on top of the sun.

"The moon's crisp horizon can be seen from this view because the moon has no atmosphere to distort the sunlight," NASA explains.

When a total eclipse is observed from Earth, the moon's rough relief causes the spectacular effect that we know as Baily's beads — the sparkling lights on the edge of the black disc that signal the beginning and the end of total eclipse.

​Astronomy enthusiasts may take the event as a sort of teaser of a greater event that will take place later this year. A total solar eclipse will happen on August 21 and it will be visible from a narrow, 70-mile-wide strip of land across 19 states in the United States, stretching from Oregon in the northwest to South Carolina in the southeast, according to Space.com. In case you cannot reach that specific strip, you may enjoy a partial solar eclipse. And don't worry, the SDO will have to enjoy a partial solar eclipse that day, too.