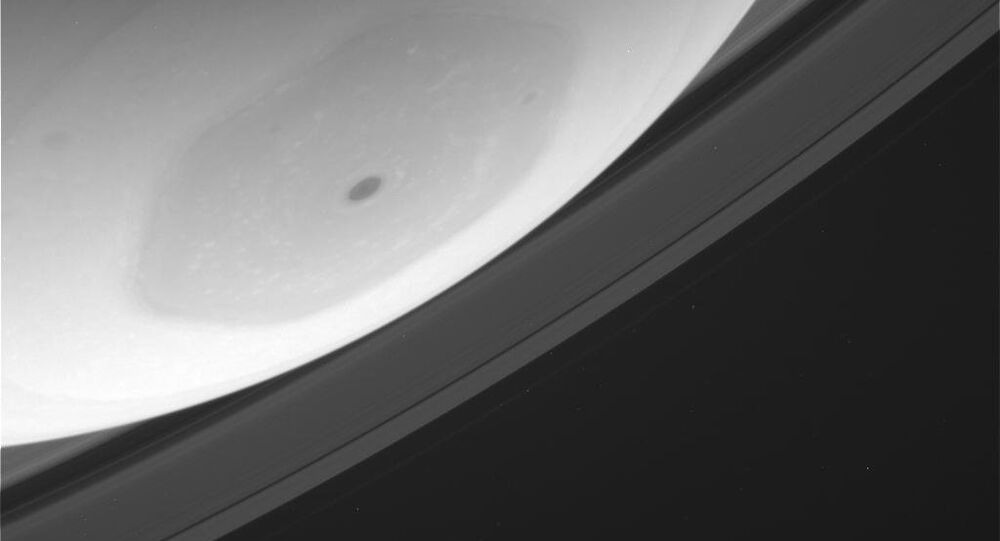 NASA’s Saturn probe Cassini has snapped a photo of the “eye” of Saturn, the hexagonal polar vortex larger than Earth that swirls endlessly in the ringed world’s upper atmosphere, from a distance of only 560,000 miles.

The photo was taken on January 22, and has a resolution of about 33 miles per pixel, according to NASA. The "pupil" of the "eye" is the storm itself, while the "iris" is made up of clouds being moved by a jet stream. The entire phenomenon is about 260 million square miles in area – for comparison's sake, Earth is less than 200 million square miles. Wind speeds in the eye reach 330 miles per hour.

Cassini
Saturn's "eye", a polar vortex surrounded by jet streams, is larger in area than the Earth itself.
The rings of color are the result of different bands of air moving at different speeds, changing the thickness and color of the cloud formations. Although the most recent pictures are in black and white, the eye would be blue if you beheld it with your own eyes, though nobody is totally sure where that coloration comes from.

The phenomenon was first spotted by NASA's twin Voyager spacecrafts, which both launched in 1977 and arrived at Saturn in the early 80s. Little was known about the storm, however, until Cassini got a good look at it in 2009. The new photo is the closest one ever snapped.

"Saturn's hexagonal polar jet stream is the shining feature of almost every view of the north polar region of Saturn," NASA said in a statement. "The region, in shadow for the first part of the Cassini mission, now enjoys full sunlight, which enables Cassini scientists to directly image it in reflected light.

© NASA . Cassini
Saturn's "eye" is hexagonal in shape due to differences in air speed between layers of the clouds.

"Although the sunlight falling on the north pole of Saturn is enough to allow us to image and study the region, it does not provide much warmth," NASA officials wrote in Monday statement. "In addition to being low in the sky (just like summer at Earth's poles), the sun is nearly 10 times as distant from Saturn as from Earth. This results in the sunlight being only about 1 percent as intense as at our planet."

The photo was taken as part of Cassini's "Grand Finale," in which the aging probe will make repeated plunges to and from Saturn with the last of its fuel. There's a good chance that the probe will be damaged or destroyed during a dive, but if it isn't, NASA will manually steer Cassini into Saturn's orbit in September to destroy it.