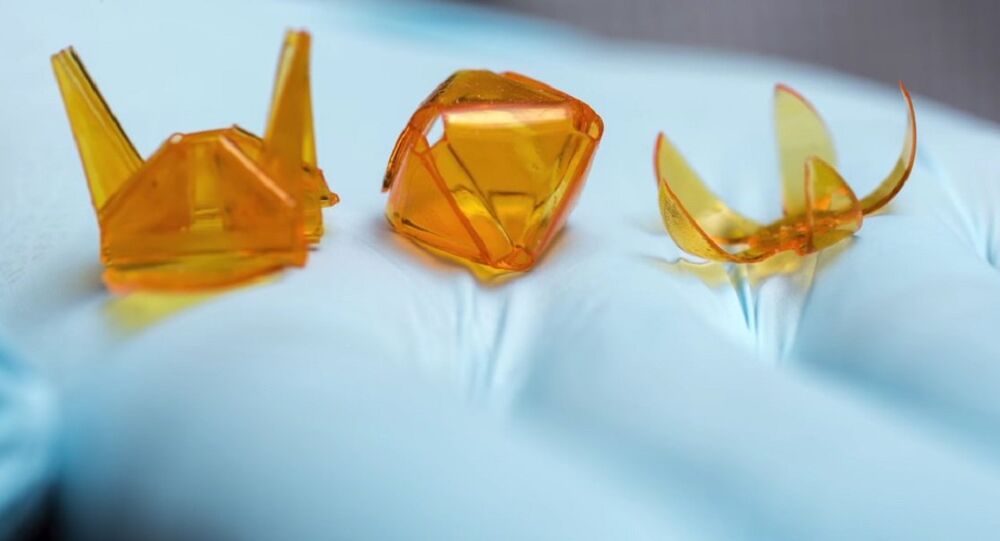 However, current methods of creating origami structures still have several limitations, such as complex material systems or tedious processing steps.

“The ‘shrinkage’ of polymers has always been considered a major problem in the manufacture of composite materials and in the operation of conventional three-dimensional printers. We once again demonstrated that if you change the viewpoint, something harmful can become very useful,” scientist Daining Fang from the University of Beijing said, Science Advances journal reported.

For the last 50-70 years, scientists have discovered several hundred kinds of polymers that react in a special way to light — some of them decompose on contact with ultraviolet or visible light, while other materials, on the contrary, harden.

These and other substances are now actively being used in the production of microchips and for many other materials and devices, including 3D printers.

The main problem of all these polymers, however, is the fact that they gradually “dry up” during hardening, as a result of which they cannot be used to print three-dimensional structures as they begin to bend and flex when their outer layers are solidified.

For this reason, all three-dimensional printers and devices using photopolymers use special printing substrates that do not allow the material to shrink during manufacturing.

Fang and his colleagues came up with a concept of how to adapt this property of photopolymers to print a kind of “three-dimensional origami” and form it into a desired shape using this shrinkage of the materials.

“The concept of our method is based on the volume shrinkage during photo-polymerization. By adding photo absorbers into the polymer resin, an attenuated light field is created which leads to a non-uniform curing along the thickness direction,” Science Journal reported.

“The degree of bending can be controlled by adjusting the gray scale and the irradiation time, an easy approach for creating origami structures,” the report read.

The main advantage of using this 3D printing technique, as the scientists note, is its universality – any person with a projector and PowerPoint or a similar program will be able to print anything he wants.

The only limitation so far is the size of the figures — it is limited to approximately 2-3 centimeters due to the inability of the polymer to flex at a large thickness.

It is possible that other types of polymers will lead to the creation of larger or miniature versions of origami, suitable for creating tools or, for example, flexible microcircuits and electronic devices.