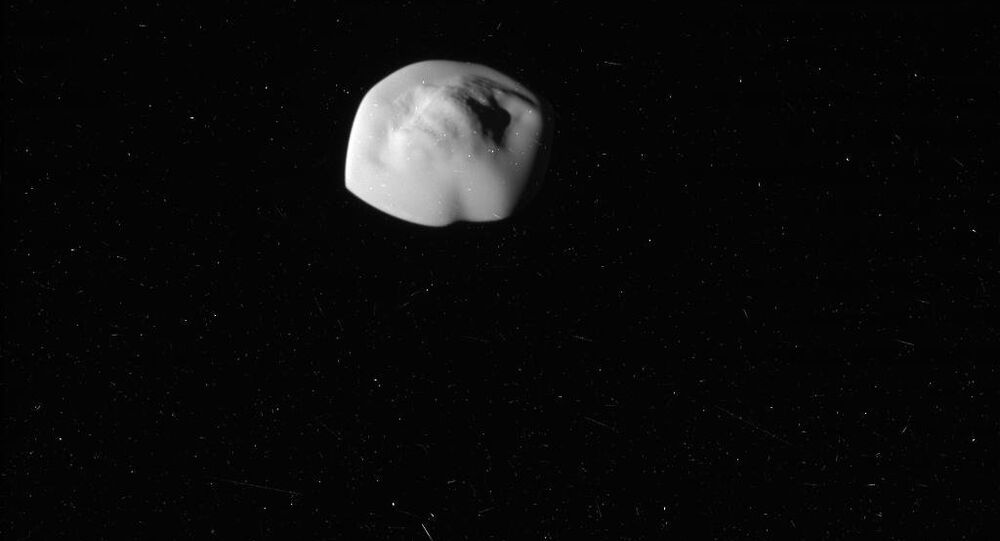 In the last days of its mission, NASA’s probe Cassini has snapped the closest-ever photos of Atlas, one of Saturn’s saddest and cutest moons.

Cassini came within 7,000 miles of Atlas before taking its photos. "These images are the closest ever taken of Atlas and will help to characterize its shape and geology," NASA wrote in a statement accompanying the images on Thursday. "Atlas (19 miles, or 30 kilometers across) orbits Saturn just outside the A ring — the outermost of the planet's bright, main rings."

Atlas has a surface area comparable to Brunei, or about half the size of Lebanon. It has a distinct paunch in its center, leading to it being nicknamed "the flying saucer" by some astronomy fans.

Discovered in 1980, Atlas earned its name because it was believed to "hold the rings [of Saturn] on its shoulders" like the Titan Atlas, who holds the sky above the Earth in Greek mythology. Atlas orbits outside the outermost of Saturn's famous rings, and researchers used to believe Atlas was a shepherd moon, a type of satellite whose gravity helps a ring keep its shape in the same way that a shepherd keeps a group of sheep together.

Later on, researchers realized that two other moons of Saturn (Epimetheus and Janus) maintain the A ring's shape through an orbital resonance, and poor Atlas's claim to fame was stolen from it.

"It's very interesting to see it close up after decades of knowing it was there," says Richard Terrile, the NASA Jet Propulsion Laboratory (JPL) scientist who discovered the moon in 37 years ago. "Finally seeing it as a real piece of real estate is very, very interesting."

"It looks more subdued than I expected. It looks like it's covered in some kind of fluffy material."

Atlas will be one of the last objects ever photographed by Cassini. The NASA probe arrived at Saturn in 2004 and has been transmitting information back ever since, but in September 2017 its mission will come to an end. Over the next five months, Cassini will make a close approach of Saturn to study its inner rings, which are 99.9 percent pure water ice. NASA hopes to be able to date the rings to discover whether they developed alongside Saturn, or after the planet had already formed.

After that, in September, Cassini will be sent careening into Saturn, at which point the gas giant's atmosphere will obliterate it. It will continue beaming back photos for as long as its instruments are able to withstand the death spiral.