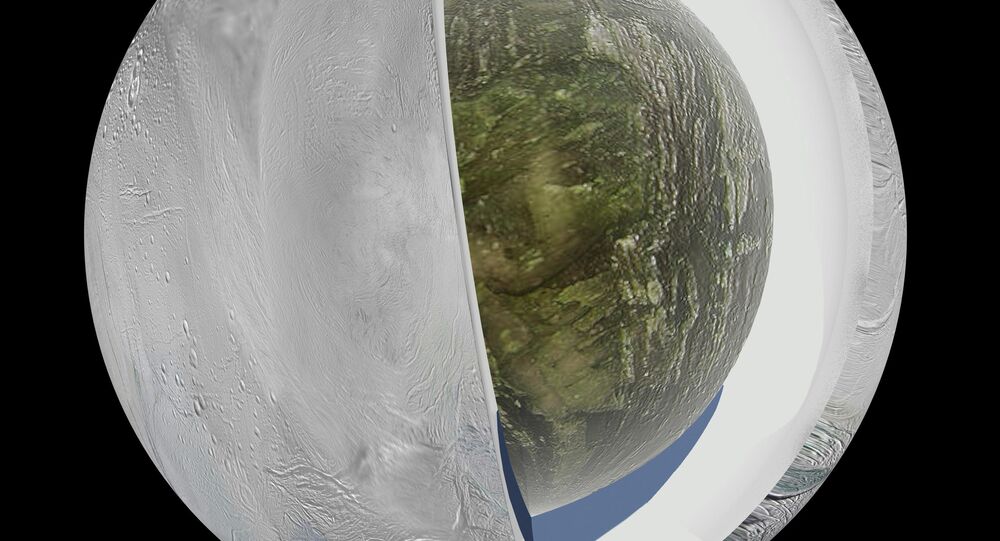 In a live statement, NASA has announced that there is an excellent chance for life to inhabit Enceladus, the watery moon of Saturn.

Like Europa, a moon of Jupiter, Enceladus is a "water world," covered by oceans of liquid water trapped under a layer of ice.

NASA's Saturn probe Cassini observed a plume of water from a crack in Enceladus's ice. When Cassini sampled the plume, it found it to be 98 percent water, with the remaining 2 percent consisting of elements like liquid hydrogen, carbon dioxide and methane – and traces of organics. Those traces are all signs of the presence of life as we know it. Simple Earth organisms eat methane and excrete carbon dioxide.

"This [molecular hydrogen] is just like the icing on the cake," said Hunter Waite of the Southwest Research Institute in San Antonio, who was study lead on the Encephalus plume observation. "Now, you see the chemical energy source that microbes could use. The only thing we haven't seen is phosphorus and sulfur, and that's probably because they were in small enough quantities that we didn't see them. We have to go back and look and search for signs of life as well."

Based on the data, NASA believes that it's possible for simple life such as bacteria (or perhaps something as complex as shrimp) to live on the seafloor of Enceladus. "We'd be excited with any discovery of life."

Enceladus is almost 10 times the distance from the sun that Earth is, so it can't rely on our star for heat nearly as much as we can. Instead, theoretical life on Enceladus would rely on vents of heat and methane on the ocean floor, similar to how bottom feeders live on our own planet.

"We haven't discovered evidence of organisms on Enceladus," stressed a NASA representative. However, the moon of Saturn has "almost all of the ingredients that you need to support life as we know it on Earth," said NASA scientist Linda Spilker.

However, "confirmation that the chemical energy for life exists within the ocean of a small moon of Saturn is an important milestone in our search for habitable worlds beyond Earth," she said.

Enceladus is quite small, only about 300 miles across. This makes it about 15 percent as large as our own moon.

Cassini was able to analyze the habitability of Enceladus, says NASA, but does not have the instrumentation to search for life. Cassini's mission is also coming to its end, as NASA intends to send it careening into Saturn in September. The atmosphere of the gas giant will obliterate the spacecraft entirely.

"This distant moon now joins Mars and Europa as the best potential locations for life beyond Earth in our solar system," said Andrew Coates, a professor of physics at University College London.

The Hubble Space Telescope observed a similar plume of water on Europa.

NASA will search for life on Europa with its coming mission, the Europa Clipper.