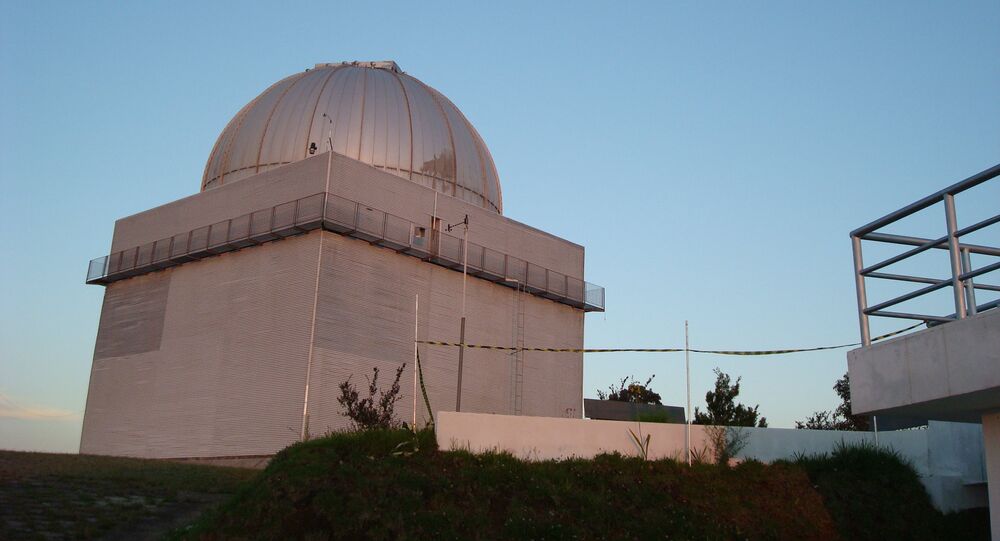 Commenting on the unveiling of Russia's high tech telescope set up by Russian state space corporation Roscosmos at the Pico dos Dias Observatory in Brazil, Bruno Castilho, the Director of Brazil's National Laboratory of Astrophysics told Sputnik what the major goals are for the project.

The project, which has been fully financed by Russia, became the country's first telescope in the Southern Hemisphere.

Bruno Castilho, the Director of Brazil's National Laboratory of Astrophysics which runs the Pico dos Dias Observatory, spoke to Sputnik about the project in more detail.

"Its practical meaning for Brazil is that it supports the agreement between the Russian and Brazilian space agencies on the joint construction of satellites and on the peaceful use of space," he told Sputnik.

He said that the telescope's primary task is to monitor space junk to anticipate potential collisions with the Earth.

"When Brazil launches its new satellite, it will have access to the detailed routes taken by space junk put together by Roscosmos, and will therefore be able to calculate safer orbits and thus secure the Brazilian investments," he said.

© Photo : Pixabay
China Considering Cooperation With Russia on Space Debris
There are a number of large pieces of junk traveling the Earth's orbit and tracking their path can help prevent their potentially destructive impact. Brazil is currently required to follow NASA's recommendations when launching new equipment into orbit, but the US space agency does not provide detailed information. With the new telescope, Brazil will have better information about which orbit to choose.

In addition, Brazilian astronomers will have access to all the data collected by the telescope to research supernovas, asteroids and other scientific activities, he added.

The imagery produced by the telescope, he said, will help advance research by supporting studies on asteroids, comets, and stars. All the data and photos that the telescope provides will be made available to the scientific community upon request to the National Astrophysics Laboratory.

Another very important aspect of this project, he said, that it paves the way for new joint projects on the development of new technologies.

Russia and Brazil have many opportunities for cooperation however due to the long distance between the two countries they don't use them to their maximum potential.

There are many projects for this cooperation which however are yet to get to the ministerial level. This project therefore demonstrates is a good example which shows that any project can be launched and implemented between the two countries.