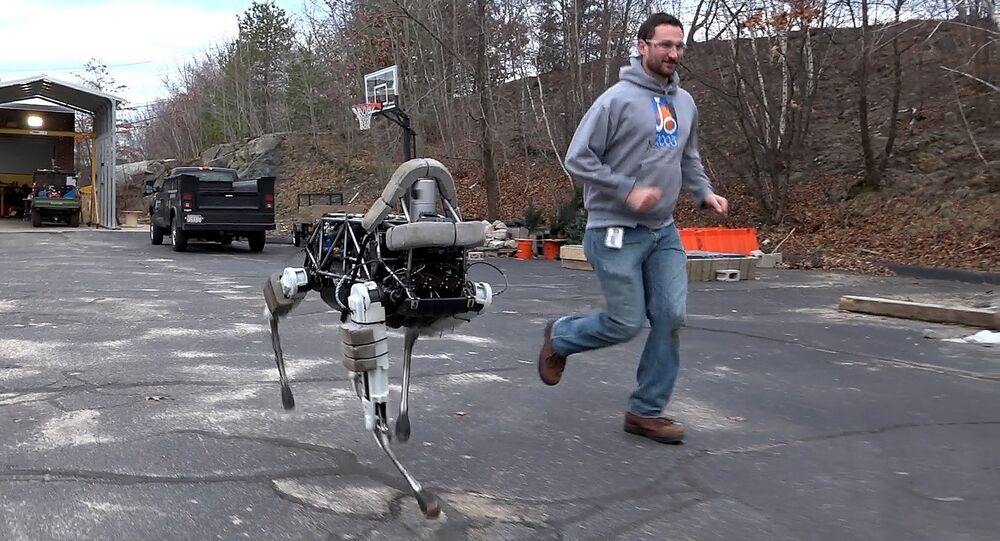 The US Marine Corps is preparing to resume testing on its four-legged robot, “Spot.”

A project of the Corps’ Warfighting Lab, the dog-sized device is slated to re-enter developmental testing in the fall.

Capt. Mike Malandra, who heads the Warfighting Lab’s science and technology branch, said that Spot’s hydraulic legs may make it more maneuverable than the small, unmanned Modular Advanced Armed Robotic System, which features treads similar to a tank rather than limbs.

Malandra told Military.com, "It's not a tracked vehicle so it can turn around on a dime. The other benefit of something like that is it can get up when it falls over, whereas MAARS can't … So that's really what we're looking at doing, potentially, with those kinds of things moving forward here in fall: Use it as a surrogate platform for something that is maneuverable in a way similar to a human."

In 2010 the Marine Corps entered a collaboration with the Defense Advanced Research Projects Agency (DARPA) for a $32-million program to develop and test the "robo-mule," a large bot used to carry heavy loads. Its proper name is the Legged Squad Support System (LS3), and it was made by Boston Dynamics, a subsidiary of Google.

The technology played an important role with Marines in the 2014 Rim of the Pacific exercises, after then-commandant Gen. Jim Amos viewed it in 2012. But the experimental program came to end in 2015 when the Corps gave no commitment to further developing a quadruped robot.

Earlier iterations presented logistical problems, often requiring repairs and featuring a noisy diesel engine, which would make it less than ideal for patrols.

Spot, in this third prototype, is battery powered and much smaller at 160 pounds, but it has been inactive since it was given to the service after the experiment ended. Malandra said, "It's been pretty dormant … a showpiece, really."

But Spot may be given new life through the service’s new Marine Corps Operating Concept, which focuses on pairing robots with Marines. The system will now feature Teleop-assist logic, which will keep it from colliding with physical objects, a 180-degree camera and a radio. Spot’s operator can be located as far away as 500 meters.

Boston Dynamics roboticist Ben Swilling told Marines TV, "They can’t get shot and they can’t die, that’s really the reason right? It’s basically if you want to send something into a dangerous way and don’t want anyone to get hurt."

"We're looking to put them in environments and lanes that are similar to things we've come up with through wargaming and through other things, that fit our operational concept that was just published for 2025," Malandra said.

Boston Dynamics has another four-legged robot under its belt: BigDog can jog up to five miles per hour and is strong enough to toss a cinderblock.

US Marines to Train on New F-35s Before They Deploy