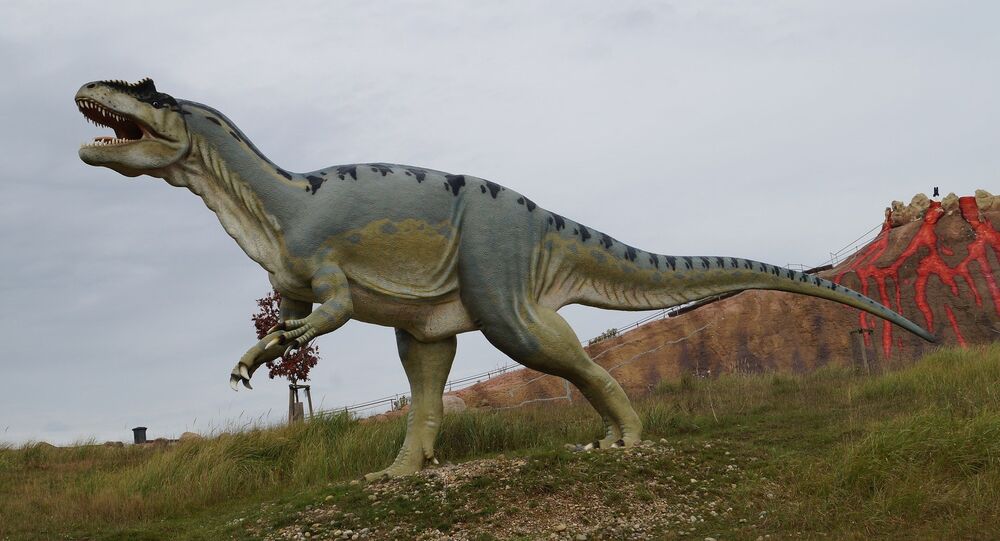 So Sensitive: T. Rex Had a Tactile Snout, Rubbed Them Together During Foreplay

Most people don't think of Tyrannosaurus Rex or any of its less famous cousins as adorable, but paleontologists with Carthage College in Wisconsin have reconstructed the face of one of its relatives to better understand the evolution of dinosaur species. Among their finds was that tyrannosaurs probably rubbed snouts as a gesture of affection prior to foreplay.

Today's paleontologists know that dinosaurs have much more in common with birds than previously believed: they were feathery, beaked creatures with a distinctively birdlike gaits. However, many dinosaurs lacked beaks — only the species that died out later on have them.

The Carthage team detailed the face and head of Daspletosaurus horneri, a close relative of T. rex. D. horneri was a bit smaller than T. rex, only 30 feet long instead of 40, but it and T. rex were highly similar species that both lived in the late Cretaceous Era.

The facial reconstruction was "critical to understanding the evolutionary transition from nonbeak to beak along the line to birds, since beaks are specialized epidermal structures," wrote the Carthage College team.

The well-preserved D. horneri skull showed signs of the nerves and tissues that once lay on top of the bone, allowing the team to reconstruct its face with the help of the sizable database of tyrannosaur bones. "With this dinosaur, we've literally changed the face of tyrannosaurs," said study lead Thomas Carr, an associate professor of Biology at Carthage.

Among the team's findings were that D. horneri had extremely similar internal wiring on their lower jaws to birds and crocodiles. For instance, the reconstruction indicates the presence of a trigeminal nerve, which is present in animals who detect vibration, infrared, electricity, and magnetic fields with their faces.

D. horneri's trigeminal nerve connected to its nose and mouth, meaning it probably used its snout for sensory information. This would give D.horneri "high resolution tactile sensations from the skin, making their snouts more sensitive than human fingertips."

The nerve also "would have aided adult tyrannosaurids in harmlessly picking up eggs and nestlings and, in courtship, tyrannosaurids might have rubbed their sensitive faces together as a vital part of pre-copulatory play."

In other words, T. rexes probably would eskimo kiss before getting down and dirty. If you take nothing else from this article, take away that mental image.

If tyrannosaurs relied so heavily on their faces for sensory information, that makes it unlikely that they had feathers on their faces. It also takes credence away from the theory that T. rex had lips. "There's no evidence for lips here," said Carr. "The flat scales cover the entire side of the snout and go to the tooth row," l

So it looks like eskimo kissing was the only sort T. rex did.