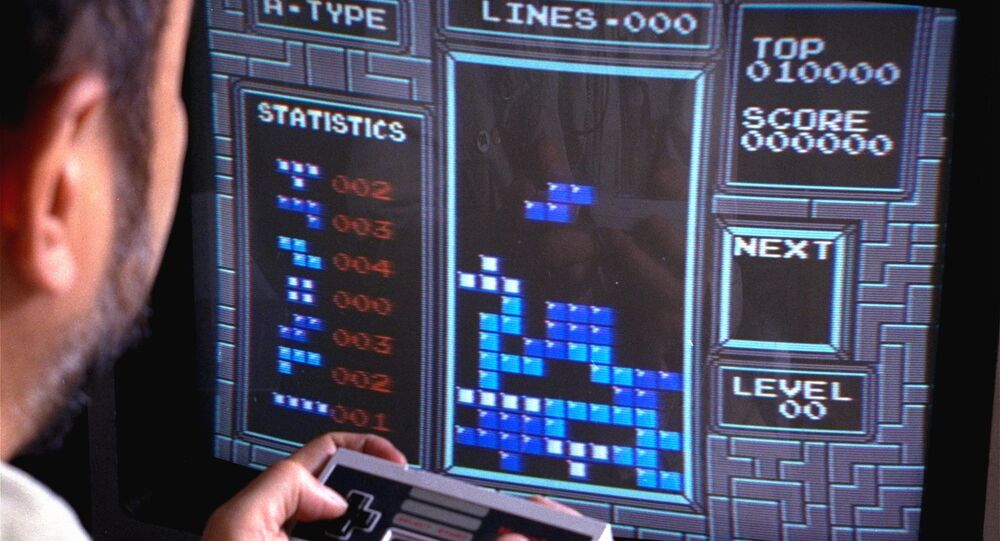 Computer games are oft blamed for ruining juvenile minds, destroying attention spans and stunting social development, but two studies have suggested playing they could actually have a highly beneficial impact on human minds, particularly for individuals suffering from traumatic memories and addictions of various stripes.

Tetris is a classic tile-matching puzzle game, originally designed and programed by Russian game designer Alexey Pajitnov — its name is a portmanteau of the Greek numerical prefix tetra, and tennis, Pajitnov's favorite sport. Released on June 6, 1984, it was the first entertainment software to be exported from the USSR to the US. It has been adapted for a great many gaming devices in its nigh on four decade existence, but is perhaps most commonly associated with the Nintendo Game Boy — it is frequently hailed as having "made" the Game Boy, and vice versa.

First video game🎮 played in #space was Tetris on a #Gameboy, played by cosmonaut Aleksandr Serebrov in 1993 aboard Mir#gamers #history pic.twitter.com/WL442HSJ1P

Now, two academic papers have suggested Tetris can suppress traumatic memories and addiction. In the former case, Tetris could mean painful memories are less likely to resurface as intrusive, distressing flashbacks, which means the game could be used to prevent and treat post-traumatic stress disorder, depression, complicated grief, and other mental health issues. In the latter, for those struggling with cravings or addiction, Tetris can diminish the intensity of cravings and help game players fight off dependencies.

The healing potential of Tetris has long been theorized with some seriousness. A 2010 study conducted by the University of Oxford suggested the game could interrupt memory processing immediately after a traumatic experience.

That experiment relied solely on study participants who were "traumatized" by watching footage of fatal accidents and other gory clips to reach its conclusions — in this study, researchers tested Tetris therapy on victims of real-life accidents.

In all, 71 patients that arrived in an Oxford hospital emergency department within six hours of being involved in a traffic accident were enrolled in the study, with every case meeting the medical criteria of a "traumatic event" — each participant had "experienced, witnessed, or was confronted with" an event or events that involved actual or threatened death or serious injury.

Of the 71, 37 were randomly chosen to play around 20 minutes of Tetris while at the hospital. The remaining 34 merely logged their activity while they were in the hospital, recording actions such as reading, texting, getting care, chatting, or completing a crossword puzzle.

© AP Photo / Mark Lennihan
This May 22, 2009, shows the puzzle video game Tetris at Barcade in the Brooklyn section of New York. T

A week later, the group that played Tetris reported they, on average, were hit with an intrusive, disturbing flashback 8.7 times during the week, while the activity-logging group reported an average of 23.3 upsetting flashbacks. The team believes this suggests 20 minutes of Tetris can cut trauma flashbacks by around 62 percent, and conclude the brief intervention "offered a low-intensity means" of substantially improving the mental health of those who have experienced psychological trauma. They suspect other tasks with "high visuospatial demands" are likely to have the same effect too, specifically suggesting drawing and the game Candy Crush, arguably Tetris' modern equivalent, as alternatives.

Conversely, when they checked back with the participants a month later, they didn't note any statistically significant differences in the overall mental health of the two groups — although the authors suggest this could be attributable to the small, short-term design of the study. Larger trials involving more subjects and regular Tetris sessions could shed more light on the potential long-term effects of brick bashing.

Another study conducted by English and Australian researchers likewise reports Tetris can stifle cravings for addictive substances such as nicotine, alcohol, and drugs, as well as other vices, such as food and sex.

The study followed 31 undergraduate volunteers who carried around iPods for a week, and filled out surveys seven times daily about their cravings. Fifteen also got to play three minutes of Tetris after the surveys, before reporting on their cravings again. When the week was up, the researchers found Tetris consistently reduced craving strength by 13.9 percent, or around a fifth. The authors explain this may be sufficient for people to ignore those cravings, and avoid their vice altogether.

The researchers again hypothesize the game's ability to seize visual and spatial processing in the brain is key to the health benefits of Tetris — after all, addiction and cravings are frequently driven by visual fantasies of that drink, drug, substance or otherwise.

As ever, more studies, with larger sample sizes, are still necessary to truly assess Tetris' psychological benefits — although perhaps uniquely for an experimental treatment, it's perfectly safe for individuals to try at home, without the supervision of trained professionals.